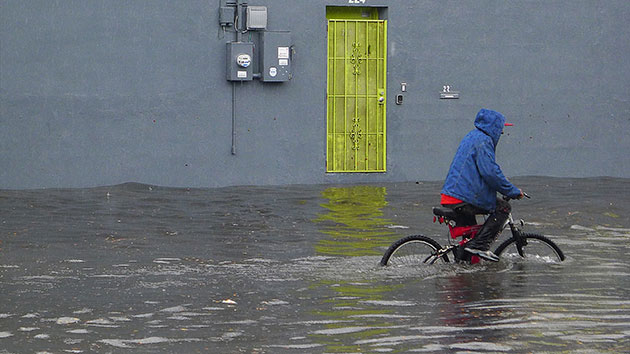 Humans are causing sea levels to rise at the fastest rate in nearly 3,000 years, according to a series of scientific reports released Monday. What’s more, the new research concludes that this acceleration is already resulting in increased flooding in US coastal communities.

The increase in sea level rise is really quite dramatic, as this chart from Climate Central illustrates:

There are human fingerprints on thousands of U.S. — and global — coastal floods https://t.co/1uZoocfCXS pic.twitter.com/w8lfX2upYU

The impact of that change is already being felt by Americans. From the New York Times:

[Scientists] also confirmed previous forecasts that if emissions were to continue at a high rate over the next few decades, the ocean could rise as much as three or four feet by 2100…The rise in the sea level contributes only in a limited degree to the huge, disastrous storm surges accompanying hurricanes like Katrina and Sandy. Proportionally, it has a bigger effect on the nuisance floods that can accompany what are known as king tides…The change in frequency of those tides is striking. For instance, in the decade from 1955 to 1964 at Annapolis, Md., an instrument called a tide gauge measured 32 days of flooding; in the decade from 2005 to 2014, that jumped to 394 days.

Here’s another great Climate Central tool that lets you see the impact in a selection of the most vulnerable coastal cities:

Scary as this all is, it’s further proof that the leading GOP candidates for president are living in a fantasy world. Florida Sen. Marco Rubio, despite representing perhaps the most vulnerable state, doesn’t want to do anything about climate change. Donald Trump and Ted Cruz deny the problem even exists. But it’s a fact that the US economy has a direct stake, today, in slowing climate change and preparing for its impacts. Every study like this that comes out makes it more ridiculous, and dangerous, to pretend that isn’t the case.