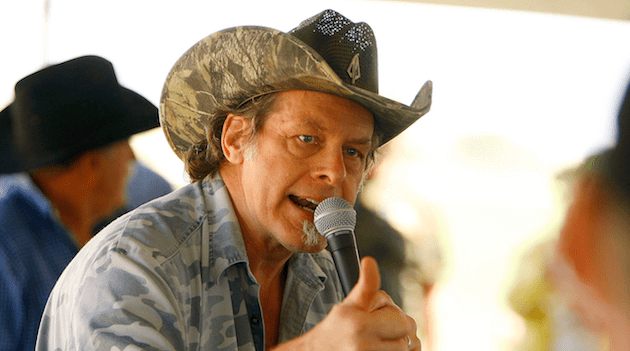 Ted Nugent is no stranger to mounting outrageous defenses of the gun lobby. But this week, the musician’s predictable inflammatory language reached new levels of offensive starting on Monday with the following anti-Semitic image posted to his Facebook page:

Know these punks. They hate freedom, they hate good over evil, they would deny us the basic human right to self defense …

The info-graphic features the images of 12 Jewish-American politicians all paired with the Israeli flag and the banner question, “So who is really behind gun control?” As Media Matters noted, a similar image appeared on the white supremacist website Stormfront in 2014.

The next day, Nugent, who is a board member for both the National Rifle Association and for John Lott’s Crime Prevention Research Center, posted another offensive image, this one appearing to compare gun control advocates to Nazis:

Soulless sheep to slaughter. Not me.

This isn’t the first spasm of anti-Semitism and Nazi imagery to come from the NRA or its board members. Back in 2007, the group’s official magazine published an image of then New York City Mayor Michael Bloomberg—who is featured in Nugent’s social media ranting this week—depicting him as an octopus, a well-known symbol of anti-Semitism. The NRA denied the analogy.