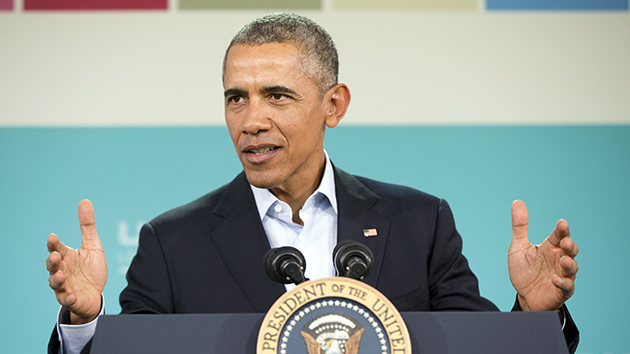 President Barack Obama offered a preview on Tuesday of the pressure Republicans will face as long as they block a vote on a nominee to the Supreme Court. After Justice Antonin Scalia died unexpectedly over the weekend, Senate Majority Leader Mitch McConnell quickly stated that the Senate would not consider any nominee in a presidential election year—a stance that even a few of his Republican colleagues believe is a politically dangerous position to take. Speaking at a press conference in California, Obama offered a peek at the kind of political arguments that could rain down on Republican presidential candidates and senators up for reelection if they refuse to vote on his nominee.

“The Constitution is pretty clear about what is supposed to happen now,” Obama said. “When there is a vacancy on the Supreme Court, the president of the United States is to nominate someone. The Senate is to consider that nomination. And either they disapprove of that nominee or that nominee is elevated to the Supreme Court. Historically, this has not been viewed as a question. There’s no unwritten law that says it can only be done on off-years.”

The president pointed out that Constitutional originalists (like Scalia) are now somehow finding in the text of the Constitution an excuse for him not to nominate a replacement. He challenged anyone who believes in the Constitution to come up “with a plausible rational for why they won’t even have a hearing…It’s pretty hard to find that in the Constitution.” He also used the opportunity to bring up the fact that the GOP-controlled Senate is holding up many of his nominees, from judicial candidates to ambassadors to appointees for positions at federal agencies. Obama characterized the Senate’s current obstruction over nominations as follows: “If we don’t like the president, we’re just not going to let the president make any appointments.” He added, “This has become a habit and it gets worse and worse each year.”

And for those reading the tea leaves about whom Obama will pick as a nominee, Obama said only that his selection would be “indisputably qualified” so that it will be hard for the Senate to protest his nomination. Asked in a follow-up question whether that meant he intended to nominate a moderate who might appeal to Republicans, Obama responded, “No.”