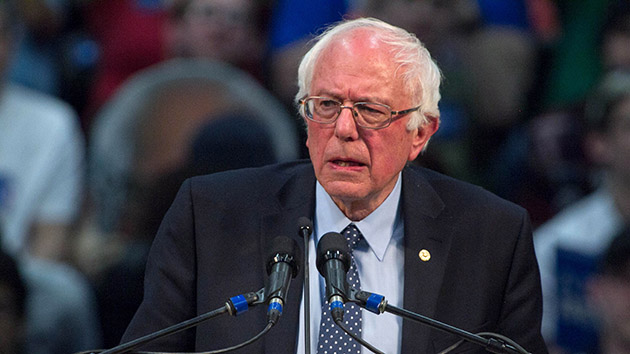 Bernie Sanders has been increasingly direct in his attacks against Hillary Clinton’s past positions. But there’s only one problem with his holier-than- thou narrative: Sanders’ own voting record shows he’s often voted for similar measures.

Sanders and his supporters seem to consider political consistency as the main measure of a politician’s character. “You can be a moderate. You can be a progressive. But you cannot be a moderate and a progressive,” Bernie subtweeted Clinton last month. But Sanders has been in the House or Senate for more than 25 years, and during all that time, any politician’s voting record is bound to have some inconsistencies. Sanders is no exception. At times he’s voted in favor of bills on national security, criminal justice, and immigration that he says he now opposes, attacking Clinton for casting the same votes that he did.

When President Barack Obama announced his plan to shutter the controversial detention facility in Guantanamo Bay last week, Sanders sent out a press release that made sure to ding Clinton over a vote she took that included language to keep Guantanamo Bay open. “Sanders was one of only three senators to vote in 2007 against barring the transfer of Guantanamo detainees to America,” the release said. “Then-Sen. Hillary Clinton voted for the amendment that kept the prison open.”

It’s true that Clinton voted for a resolution in 2007 that said detainees from the prison “should not be released into American society,” but that same year she co-sponsored legislation that directly stated the island prison should be shut down and that some prisoners should be transferred to US facilities. But Sanders voted in favor of a 2009 bill that more directly kept the prison open. And when, early in his presidency, Obama was exploring options to close Guantanamo, the Senate voted 90-6 in favor of a measure that barred the president from moving any detainees into prisons on the US mainland. Sanders was one of the 90 who voted in favor of the measure that rebuked Obama.

The Sanders campaign has also been hammering Clinton over the 1994 crime bill that increased penalties for repeat offenders and added funding to build more prisons. “What he does not do is throw people under the bus when it’s politically expedient,” Sanders’ campaign manager Jeff Weaver said on MSNBC earlier this month. “Whether it was in 1994 when then First Lady Clinton called African American youths ‘super predators’ to push a terrible crime bill or whether it was using coded language in 1996 to pass welfare reform, or whether it was throwing gay people under the bus with DOMA. That’s not what Bernie Sanders does. He stands tall with people even when the fight is not popular.” Except Sanders failed to “stand tall“ against the popular fight in 1994. He sided with the majority of Democrats when he was a member of the House and voted for the crime bill that  Bill Clinton signed into law. When Sanders tried last week to explain his support for the 1994 bill, he cited the bill’s ban on assault weapons as part of his reason—except the initial House version that he voted for didn’t include the assault weapons ban, a provision added by the Senate.

Then there is Sanders’ criticism of Clinton on immigration. During a pre-Nevada TV town hall, Sanders threw shade at Clinton on Twitter for saying she’d seek to end the 3-year and 10-year bans on allowing immigrants who overstayed their visa to return to the country.

Glad to hear @HillaryClinton‘s promise to remove the three and ten year bars against returning immigrants put in place by the Clinton admin.

The only problem? Sanders voted for the measure. It was part of the Illegal Immigration Reform and Immigrant Responsibility Act of 1996 that passed as part of the defense appropriations bill that year.

As Clinton has frequently pointed out during debates when Sanders challenges her financial-reform bona fides, Sanders voted for the Commodity Futures Modernization Act in 2000, which eased regulations on Wall Street, thus paving the way for the credit default swaps that sank the economy in the Great Recession.

All of this isn’t to say Sanders’ attacks lack merit. While Clinton’s standard campaign speech has called for a repair of the country’s criminal justice system, she has stopped short of a full repudiation of the crime bill her husband signed into law. And, based on her track record representing New York in the Senate, she would have likely joined Sanders in voting for the Commodity Futures Modernization Act, but she hadn’t yet been elected to the Senate when it became a law.

But that sort of nuanced measure of political evolutions hasn’t been part of Sanders’ attacks against Clinton. “When this so-called crime bill was being considered,” Weaver, Sanders’ campaign manager, said in the press release last week, “Bernie Sanders criticized its harsh incarceration and death penalty provisions. Hillary Clinton, on the other hand, resorted to dog whistle politics and dehumanizing language. Bernie was right then and he’s right now.”