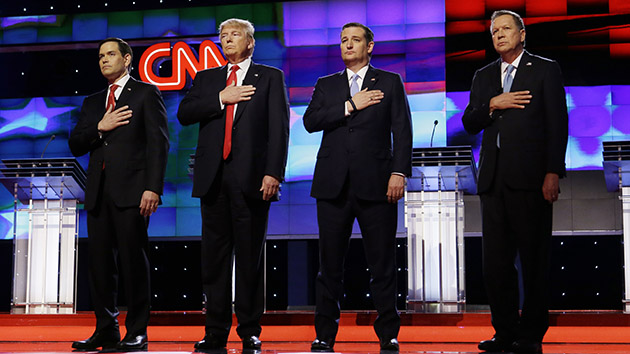 When the four remaining candidates met for the zillionth GOP debate in Miami Thursday night, something felt different. The candidates took a break from insulting each other to discuss serious policy issues, including trade deals, guest worker visa programs, and entitlements. The first hour of the debate was largely a snoozefest. At one point, Donald Trump—America’s insulter-in-chief—commented, “I can’t believe how civil it’s been up here.” But eventually the candidates returned a bit to their feisty selves, though none of Trump’s opponents wanted to criticize him for the increasingly violent tone of his rallies.

Here are the best moments from Thursday’s debate:

Donald Trump goes off against Islam. During an interview with CNN on Wednesday, Trump said “I think Islam hates us.” During Thursday’s debate, moderator Jake Tapper pushed Trump to clarify his statement and explain whether he truly thought it summed up all the 1.6 billion Muslims worldwide.

“I mean a lot of them,” Trump responded.

“There’s tremendous hatred, and I’ll stick with what I said,” Trump concluded.

Trump and Rubio do battle over Islamophobia. Marco Rubio was quick to criticize Trump’s attacks on Islam. Rubio accused Trump of making Americans less safe with this kind of rhetoric. “I know that a lot of people find appeal in the things Donald says because he says what people wish they could say,” Rubio said. “The problem is, presidents can’t just say anything they want. It has consequences, here and around the world.”

In response, Trump invoked the September 11 terrorist attacks. “Marco talks about consequences,” Trump said. “Well, we’ve had a lot of consequences, including airplanes flying into the World Trade Center, the Pentagon, and could have been the White House.”  He continued: “Now you can say what you want, and you can be politically correct if you want. I don’t want to be so politically correct.”

Trump: Let’s torture just like the terrorists. Trump again defended his position that the United States should engage in torture. By Trump’s logic, since terrorists are doing it, Americans should too. “Now, we have to obey the laws, have to obey the laws,” Trump said. “But we have to expand those laws, because we have to be able to fight on at least somewhat of an equal footing or we will never, ever knock out ISIS and all of the others that are so bad.”

Rubio: Maybe we can have an Israel-Palestine peace deal in 30 years. Trump once again said he would attempt to broker a peace deal between Israel and Palestine. Rubio pounced on that, calling Trump’s position “an anti-Israeli policy.” Rubio argued the conditions for peace simply do not exist and suggested he wouldn’t even attempt to force the two sides to the negotiating table.

“The Palestinian Authority is not interested in a serious deal, and they are now in union with Hamas,” he said. “What they are interested in is ultimately removing the Jewish state and occupying its entire territory. So maybe in 30 years the conditions will exist, but they do not exist now.”

He added: “And to have a president forcing the Israelis to the table is harmful to the Israeli and emboldens Israel’s enemies.”

Trump responded in an uncharacteristically muted way: “I would like to give it a shot,” he said.

John Kasich says there’s no hope for peace in the Middle East. While it might have seemed like Rubio was pessimistic about finding common ground between Israel and Palestine, Kasich went a step further. The Ohio governor said dreaming of a peace deal was foolish and that the United States just needed to accept the status quo and help Israel as much as possible under current conditions. “I just have to tell you this: I don’t believe there is any long-term permanent peace solution,” Kasich said. “And I think pursuing that is the wrong thing to do.” Kasich added that he favored promoting “stability in that region by supporting the Israelis and making sure they have the weapons and the security that they need with our 100 percent backing.”

Rubio: Washington can’t change the weather. Rubio, whose hometown of Miami is at serious risk due to climate change, insisted there’s nothing Washington can do to help prevent global warming. Laws aimed at combating climate change, he said, won’t fix anything. “You know what passing those laws would have—what impact it would have on the environment?” he said. “Zero. Because China is still going to be polluting, and India is still going to be polluting at historic levels.”

Rubio refused to say climate change is caused by humans—but his comments do seem to suggest pollution by all nations is doing something.

“We have 25 [thousand], 30,000 people—you’ve seen it yourself,” he said. “People come with tremendous passion and love for the country, and when they see protest—in some cases—you know, you’re mentioning one case, which I haven’t seen, I heard about it, which I don’t like. But when they see what’s going on in this country, they have anger that’s unbelievable. They have anger…They don’t like seeing bad trade deals, they don’t like seeing higher taxes…There’s also great love for the country. It’s a beautiful thing in many respects. But I certainly do not condone that at all, Jake.”

Tapper followed up by quoting Trump’s own words on violence at his events. “Some of your critics point to quotes you’ve made at these debates—at these rallies, including February 23: ‘I’d like to punch him in the face,’ referring to a protesters. February 27: ‘In the good ol’ days, they’d have ripped him out of that seat so fast.’ February 1: ‘Knock the crap out of him, would, you? Seriously, okay, just knock the hell. I promise you I will pay for the legal fees; I promise, I promise.'”

Trump responded by saying there are nasty protesters hurting people at his rallies, which is questionable.

I am at almost every Trump rally. I have yet to see a single protester start swinging as Trump just said.

Notably absent from this exchange was any mention of the fact that Trump’s own campaign manager allegedly manhandled a reporter on Tuesday night, an allegation the campaign manager has responded to by attacking the reporter. After the debate, Trump said he thought the incident was made up.