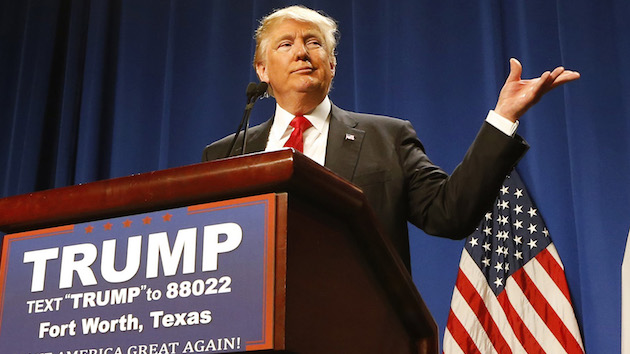 Increasingly desperate in the face of Donald Trump’s growing lead in the Republican primary contest, his opponents have begun hurling attacks at him in a last-ditch effort to stop his rise. Marco Rubio is now calling Trump a “con artist” who started a “fake university” in order to trick people into taking out loans. Ted Cruz continues to hammer at Trump for having previously been pro-choice and progressive on other issues before he decided to run for president. Mitt Romney lashed out at him on Thursday as “a phony, a fraud.” A new super-PAC dedicated to defeating Trump released an ad this week hitting the front-runner for the Trump University scam.

But attendees of this year’s Conservative Political Action Conference, just outside Washington, DC, say these attacks are one scam they are not going to fall for.

“They’re basically desperate attacks that aren’t going to do anything,” said Ronald Travino of Baltimore, who wore a “Make America Great Again” hat. On the issue of the now-defunct Trump University—which offered real estate seminars that cost students up to $35,000, and which is the subject of three lawsuits that allege Trump defrauded students by misrepresenting what the “university” was—Travino admitted it was a “black mark” on Trump’s record. “But I don’t care,” he added. And he doesn’t think Trump’s supporters will care either.

Matthew Higgens, a Trump supporter from Myrtle Beach, South Carolina, felt the same way about Trump University. “To be honest with you, I don’t care,” he said. Higgens said other Republicans hadn’t gone after predatory for-profit colleges that get students to take out loans for degrees and jobs that don’t pan out. “How can you point the finger at one guy?” he asked. “It’s ridiculous.”

Higgens didn’t think the attacks would hurt Trump. “It’s late in the game and they’re just slinging so much mud,” he said. “It’s futile.”

Even attendees who don’t support Trump aren’t buying the con man attacks. When you’ve built a business empire like Trump’s, explained Mike Brown of Atlanta, “there’s gonna be some people who sue you.” Trump “says he got rave reviews” for Trump University, said Brown, who voted for Rubio on Tuesday.

Brown’s wife, Susan, who also voted for Rubio, calls the onslaught of attacks on Trump the work of the GOP establishment. “A part of the Republican Party wants to decide, take it out of the people’s vote,” she said. “It’s unfortunate.”

Other voters just shrugged off the attacks as politics as usual. “Politics is not pretty,” said Kelly Slobodian of New Bern, North Carolina. “It is a competition.” Her husband, Paul, agreed. It’s “the fourth quarter with two minutes left on the clock and everyone is pulling out all the stops,” he said. And attacks like that are often “exaggerations,” he added.

But there is one line of attack that worries him: that Trump has too frequently held liberal positions, such as being pro-choice. “Those attacks resonate with me,” he said. “[Trump] said he’s changed”—but can he be trusted?

His wife didn’t share his concern because, she explained, people change. After all, Mrs. Slobodian pointed out, once upon a time her husband voted for George McGovern.