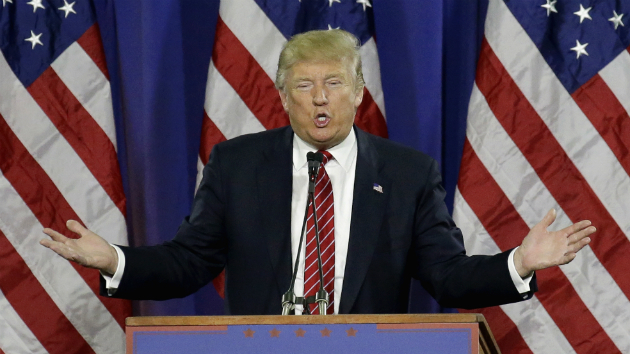 Donald Trump says he’s a uniter, and he’s not all wrong. At least four groups, representing four disparate points on America’s fairly scattered political map, have united in their dislike of Trump and funded attacks today on the Republican presidential front-runner.

According to the Federal Election Commission’s list of independent expenditures—the explicitly political ads funded by outside groups that have proliferated since the Supreme Court’s Citizens United ruling—the first to go after Trump today was the American Future Fund, a dark-money group based in Illinois that has deep ties to the Koch brothers’ network. It’s not clear who is funding the group currently, but it has been spending heavily against Trump, and today it filed notice that it had dropped another $110,000 on anti-Trump television ads in Florida. The group, with both a super-PAC arm and a nonprofit dark-money wing, has been prominent on the conservative side of American politics for several years, and so far this election it has also targeted Trump’s leading rival, Sen. Ted Cruz (R-Texas).

Which is why it’s so interesting that another group that announced it was unleashing a new round of anti-Trump attack ads was the Club for Growth. Where the American Future Fund has been linked to elite conservative donors and has fought Cruz’s rise, the grassroots-oriented and tea-party-aligned Club for Growth was actually the largest source of donations for Cruz’s 2012 Senate campaign, providing more than $705,000.

There was another odd couple on the list of groups spending against Trump today. This morning, the Human Rights Campaign filed a report that it had spent money on an anti-Trump email blast. HRC is the largest LGBT rights advocacy group in America, whose logo (an equals sign) has been widely adopted by supporters of gay marriage for their social-media profile pictures.

HRC’s expense on the email blast was just $445. But what’s interesting is the juxtaposition with another group that filed a notice of its own spending right afterward: CatholicVote.org.

CatholicVote.org is, as the name would imply, a political organization that pushes deeply conservative Catholic views. The group, which does not disclose its donors, may be best known for launching the somewhat viral video “Not Alone” last summer. The video, modeled very closely on the “It Gets Better” videos, which encourage young LGBT people who are struggling with coming out, featured conservatives discussing how difficult it was to “come out” as opponents of gay marriage. CatholicVote.org reported to the FEC that it spent $1,000 on anti-Trump Facebook ads in Florida.