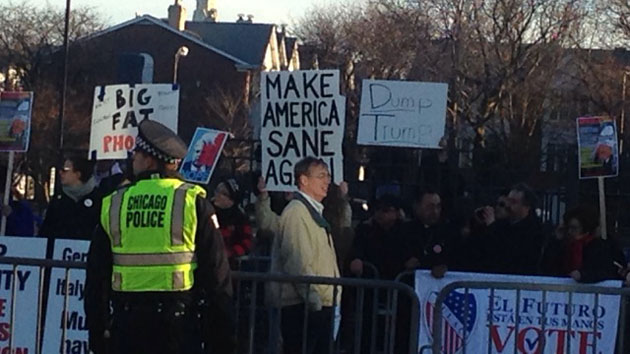 A Donald Trump rally in Chicago turned violent Friday evening just hours after a man was bloodied at an earlier rally in St. Louis. Several fights broke out at the rally at the University of Illinois at Chicago Pavilion before a Trump staffer, citing safety concerns, announced the event had been postponed about 30 minutes after the scheduled 6 p.m. start time.

Trump had this to say about violence at the canceled rally in an interview with MSNBC’S Chris Matthews:

My dad, James Patterson, was at the rally. Here’s what he told me about what he witnessed.

Thousands of people showed up to the rally. About a third of the attendees or more were anti-Trump demonstrators, he said, but that only became clear once he had passed through metal detectors and security pat downs and made it inside.

He also says it was clear that a lot of the anti-Trump demonstrators were Bernie Sanders supporters.

It was a lot of UIC people there clearly. And a lot of them were Bernie supporters. Especially after it was announced that the rally was canceled, cheers just broke out and people were excited. And in addition to saying, “We stopped Trump!” people were saying “Bernie! Bernie! Bernie!” And they started pulling out their Bernie signs and some of them were wearing Bernie badges. So it was very clear to me that there were a lot of Bernie supporters in the crowd. To some extent it was almost like a mini Bernie rally at points. It was clearly a Bernie crowd.

My dad said that as far as he could tell, Sanders supporters and Trump supporters were the only clearly delineated groups at the rally. He had seen posts on Facebook about counter demonstrations but says he made the decision to protest as soon he heard Trump would be in town. “You can’t have this man come to your city and let his hate go unanswered,” he told me.

Hundreds if not thousands of other people apparently felt the same way.