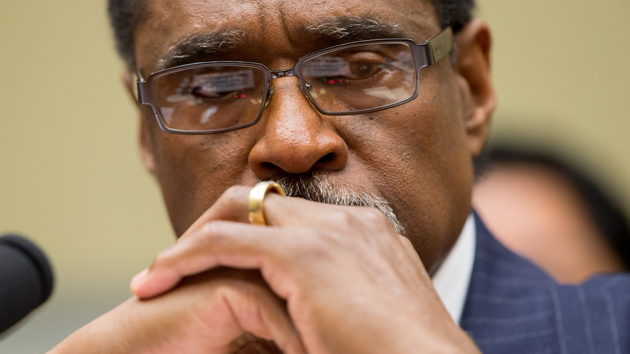 On Thursday, Michigan Gov. Rick Snyder is scheduled to testify in a much-anticipated hearing before a congressional committee investigating the contamination crisis in Flint. If Tuesday’s tense hearing—in which the committee grilled other key local, state, and federal officials—was any indication, he’d better prep a good defense.

The opening testimonies were an exercise in deflection—so much so that the committee’s top-ranking Democrat, Maryland Rep. Elijah Cummings, called it “sickening.” Former Environmental Protection Agency official Susan Hedman, who was in charge of the agency’s Midwest region until she resigned in January, went so far as to say that this EPA had “nothing at all to do” with Flint’s water contamination crisis. Darnell Earley, the state-appointed manager who oversaw the city’s disastrous switch to the Flint River water, said, “I believe that I have been unjustly persecuted, vilified, and smeared—both personally and professionally—by the media, local, state, and federal officials.”

In response to the testimonies, Rep. John Mica (R-Fla.) said, “I think this hearing is going to be known as the great finger-pointing hearing.”

Virginia Tech professor: “Apparently being a government agency means never having to say you are sorry.” In his opening testimony, Mark Edwards, a Virginia Tech professor who was largely responsible for exposing the contaminated water, came down hard on the EPA for not immediately warning Flint residents after an agency official found high levels of lead in the water in the spring of 2015. The agency, he said, “covered up evidence of their unethical actions by authoring false scientific reports” and never apologized for the ensuing crisis.

Rep. Cummings on the tainted water: “A five-year-old could figure that out!” Cummings grew frustrated with Earley, who said the Flint River water was safe even after a General Motors plant reported that the water was corroding its car parts. Earley maintained he was acting on guidance from the state’s Department of Environmental Quality. “I’m not a water treatment expert,” he said.

“You don’t have a to be a water treatment expert!” Cummings retorted. “A five-year-old could figure that out!”

Rep. Jason Chaffetz to the EPA: “You screwed up, and you ruined people’s lives.” Rep. Jason Chaffetz (R-Utah), the committee chairman, laid into former EPA administrator Hedman for not quickly taking responsibility for the crisis. He wasn’t the only one. Rep. Buddy Carter (R-Ga.) said, “There’s a special place in hell for actions like this.” Later, Cummings added, “I’m glad you resigned.”