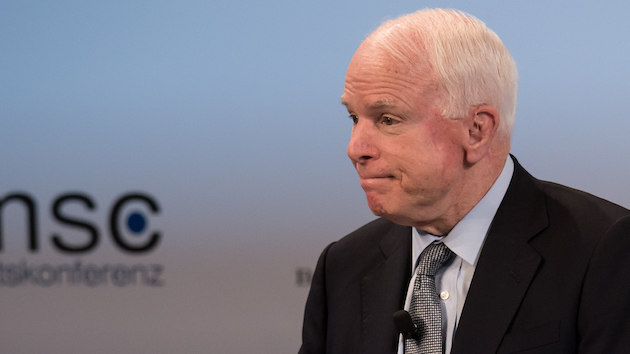 Sen. John McCain, R-Ariz., appears to have conceded that the Republican Party has alienated Hispanic voters and will have to rely increasingly on white voters to win in November.

“An interesting phenomenon right now is the huge turnouts for the Republican primaries, low turnout for the Democrat primaries,” McCain said in a Sunday appearance on the Phoenix-based show Politics in the Yard. “Now if all those people would get behind the Republican candidate, I think we could win this election despite the alienation, frankly, of a lot of the Hispanic voters.”

McCain will face perhaps his toughest re-election fight this fall. A former champion of comprehensive immigration reform, he is likely to struggle in a year in which Donald Trump is pushing Latinos away from the Republican Party. McCain will face off against several Republican primary challengers in August. Polls show McCain currently tied with his general election opponent, Rep. Ann Kirkpatrick (D-Ariz.).

McCain has steered clear of Donald Trump, who is the favorite to win the Arizona Republican primary on Tuesday night. The Hill reported last week that McCain would not attend any of the rallies Trump held in Arizona this weekend. McCain endorsed his colleague Sen. Lindsey Graham (R-S.C.) in the presidential primary; after Graham dropped out, McCain said he would not endorse anyone.