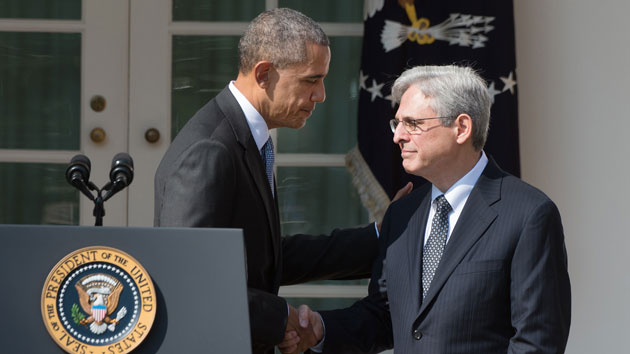 President Barack Obama stands with Judge Merrick B. Garland while nominating him to the US Supreme Court on March 16, 2016.<a href="">Douliery Olivier</a>/AP

On Wednesday, President Barack Obama picked Merrick Garland, a federal court of appeals judge with a stellar and moderate reputation, to replace the late Supreme Court Justice Antonin Scalia. His strategy was obvious: present obstructionist Republicans with a nominee with little or no baggage. But Senate Republicans immediately signaled that the Garland nomination would not change their calculations—that the fight to block any nominee was on. And prior to Obama’s announcement, conservative groups were already gearing up for this crusade, perhaps the last big battle of the right’s war on Obama.

The political players leading this effort are the usual suspects. The Republican National Committee had already announced plans to oppose Obama’s nominee—whoever it might be—and to run ads in competitive Senate races in Colorado, Ohio, Florida, New Hampshire and elsewhere, in addition to targeting Democratic members of the Senate Judiciary Committee. The tea party group FreedomWorks is rallying grassroots voters to the cause. On the other side of political spectrum, liberal advocacy groups such as the Alliance for Justice and People for the American Way are girding for a massive fight.

This face-off could well be nastier and more expensive than past confrontations over the Supreme Court. It’s the first political fight of this kind since the controversial Citizens United decision allowed money to flow freely into the political system. The influx of money has also helped create a well-funded extra-party political infrastructure that is now turning its sights on the SCOTUS fight.

Thanks to Citizens United, campaign finance rules that once limited the use of corporate and union money for certain advertisements no longer exist. Meanwhile, dark-money groups—which can get involved in campaigns but don’t have to disclose their donors—are supposed to spend slightly more than half of their money on nonelection activities to keep their nonprofit status. As a result, they “may funnel a lot of the rest of their money into Supreme Court-related ads,” says Rick Hasen, an election law professor at the University of California-Irvine law school

Here’s a look at the groups launching the assault against Garland:

Other early JCN supporters included Jay Sekulow, a longtime culture warrior and chief counsel of the American Center for Law and Justice (which was created by televangelist Pat Robertson), and Leonard Leo, the executive vice president of the Federalist Society, a leading conservative legal group. Originally called the Judicial Confirmation Network, the group was formed to help push through George W. Bush’s judicial nominees. After Obama was elected in 2008, the group shifted its focus to blocking his federal court nominees.

Since Citizens United, JCN has become more heavily involved in elections, particularly judicial and attorney general elections at the state level. It has spent millions of dollars to swing state supreme courts to the right and to elect business-friendly attorney generals. The group is a beneficiary of significant amounts of dark money. The bulk of its budget in 2014 came from an outfit called Wellspring Committee, a secretive nonprofit group that isn’t required to disclose its donors.

According to Wellspring’s most recent tax filing, it gave JCN nearly $7 million that year. Wellspring was a creation of the Koch brothers, the billionaire industrialists who have pumped millions of dollars into conservative political campaigns over the past several years. According to Ken Vogel’s book Big Money, Wellspring was one of the Kochs’ first forays into using a nonprofit entity to funnel money secretly to other political organizations to obscure the source of the funding. The Koch brothers reportedly broke with Wellspring in 2008 and moved on to other projects, but Wellspring still apparently maintains ties with members of their donor network.

Within a week of Scalia’s passing, JCN announced the launch of a $1 million ad campaign calling on Senate Republicans to refuse Obama a hearing on any Supreme Court nominee. The ads praised senators in competitive 2016 races who had already pledged to block any Obama nominee. (Last week, the group ran ads attacking Judge Jane Kelly, a federal appeals court judge who was briefly on Obama’s Supreme Court short list, for once having represented a “child molester.”) After Obama announced Garland’s nomination, JCN disclosed that it would spend another $2 million on ads opposing his confirmation.

America Rising: A super-PAC, America Rising was founded in 2013 by Mitt Romney’s former campaign manager, Matt Rhoades. The PAC’s biggest donor this cycle is Republican hedge fund mogul Paul Singer. Close behind is Mike Fernandez, a big Jeb Bush donor. The outfit has made a name for itself by sending out trackers to follow Democratic congressional candidates during the 2014 election—looking for material for attack ads. The trackers scored a big hit when they captured Senate candidate Bruce Braley calling Iowa Republican Sen. Charles Grassley “a farmer from Iowa who never went to law school,” a comment that hurt Braley’s campaign.

America Rising’s involvement in the Supreme Court fight is coming largely through a subsidiary, America Rising Squared, run by a former communications director for Sen. John McCain, that was created to do opposition research on Democratic candidates. Before the Garland pick was announced, JCN and the Republican Party each hired American Rising to dig up dirt on potential Supreme Court nominees. After Garland’s nomination, America Rising Squared executive director Brian Rogers released a statement warning of the judge’s liberal leanings. “Merrick Garland has been called the ideal judge to move the Supreme Court to the left and cement President Obama’s liberal legacy for decades into the future.” And he told the Washington Post, “We’ve done a good deal of research on Judge Garland so far and now we’re in the midst of a big surge to get after the record to make sure the American people have all the information they need to weigh this debate.”

One Nation: Republican strategist Karl Rove’s dark-money monster, Crossroads GPS, will be a key player in Senate elections, though under a less familiar name. That outside spending group, created in the wake of Citizens United, has lately been operating using an entity called One Nation. The new group is headed by Crossroads’ President Steven Law, a former chief of staff to Senate Majority Leader Mitch McConnell (R-Ky.), who has made obstructing Obama’s Supreme Court nominee a priority. One Nation has already spent several million dollars trying to help endangered GOP senators such as Sen. Pat Toomey (R-Pa.).

The group has said it will likely focus its Senate campaign efforts on the Supreme Court fight, honing in on the impact of a new potential liberal justice and the effect on core conservative issues. Ian Prior, a spokesman for the group, told Politico last month, “The consequences of our next Supreme Court justice and what that will do to shape the court for 20 years is certainly an issue that One Nation will be front and center in addressing over the next several months.”