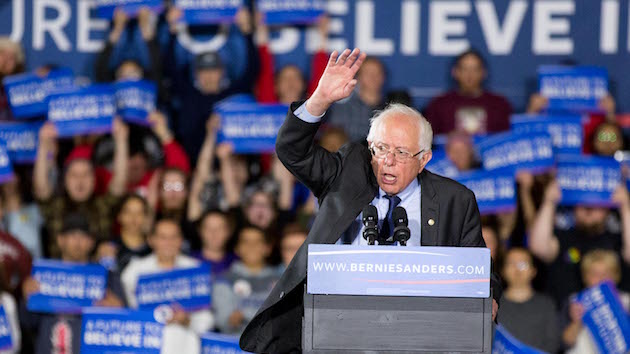 After sweeping victories in three contests over the weekend, Bernie Sanders’ campaign has a message for Hillary Clinton: “Reports of our death are greatly exaggerated.”

Sanders campaign manager Jeff Weaver made that statement on a conference call with reporters on Monday, during which top aides argued that Sanders can still overcome Clinton’s delegate lead in the Democratic primary contest. That can happen, they said, both by winning more pledged delegates and by gaining the support of more superdelegates, the 712 party leaders who are free to support the candidate of their choosing at the party’s nominating convention.

“We are certainly in this to win it,” said Weaver, “and there is a path to do so.”

The crux of the campaign’s argument for why it can overtake Clinton in the remaining contests is that the Sanders campaign does very well in states where it chooses to compete. The campaign was willing to write off big losses in many southern states as part of its strategy of focusing on winning a majority in as many states as possible, rather than capturing as many delegates as possible in states it wouldn’t win.

“Her grasp now on the nomination is almost entirely on the basis of victories where Bernie Sanders did not compete,” said senior strategist Tad Devine. “Where we compete with Clinton, where this competition is real, we have a very good chance of beating her in every place that we compete with her.”

Devine named eight states where he said the Sanders campaign did not compete with a big presence on the ground or much on-air advertising: Texas, Alabama, Virginia, Louisiana, Tennessee, Mississippi, Georgia, and Arkansas. Clinton, Devine argued, “has emerged as a weak front-runner.”

This line of reasoning was quickly challenged by reporters on Twitter.

this line from Devine has been pretty well picked apart already pic.twitter.com/zCBjMwpGCl

Clinton campaign staffers quickly tweeted out their own rebuttals.

They competed in all five states on 3/15. https://t.co/CJGay0zxaG

Going forward, the Sanders campaign said it would compete in all upcoming contests, including Wisconsin on April 5, New York on April 19, California on June 7, and even in Washington, DC, the final Democratic contest on June 14. The campaign was optimistic that it would overtake Clinton’s pledged delegate lead—she is currently ahead 1,243 to 975, with 2,383 delegates needed to clinch the Democratic nomination—and that there are dozens of superdelegates who support Sanders, but have yet to go public.

Meanwhile, the Clinton campaign is also expressing optimism that its candidate will secure the nomination. Shortly after the Sanders’ campaign call ended, the Clinton camp announced its own call with reporters to discuss Clinton’s “commanding delegate lead and her path ahead to earn the Democratic nomination.”