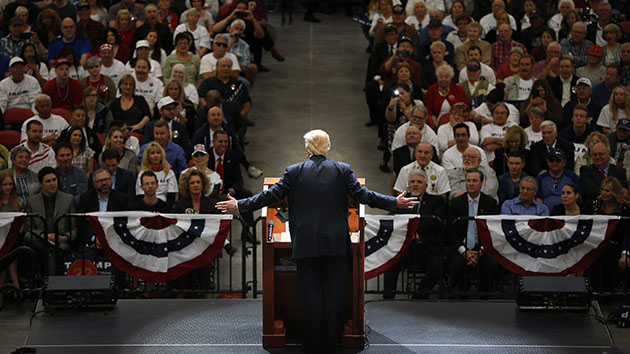 Republicans not named “Donald J. Trump” are throwing everything they can at the GOP front-runner. The growing anti-Trump movement is pouring more than $10 million into ads targeting the real estate mogul in the upcoming primary battleground states of Illinois and Florida in an effort to stymie Trump’s momentum. But Trump, who has continually turned the conventional campaign wisdom on its head this race, is hoping to use the anti-Trump ads against his rivals with a much cheaper—but so far effective—medium: his social media accounts.

Trump did not dominate Super Saturday the way he did Super Tuesday last week. Though he won states like Kentucky and Louisiana, Sen. Ted Cruz of Texas performed well enough to keep Trump’s candidacy on this side of inevitability. Trump has now turned his attention to the next round of important primaries—perhaps none so pivotal as the Florida primary on March 15—using, of course, his Twitter account.

Trump is hoping to turn his Twitter fingers into trigger fingers and aim squarely at Sen. Marco Rubio of Florida and the rest of the GOP establishment. In a series of tweets on Monday morning, Trump vowed to use Facebook and Twitter to combat commercials aired by other candidates using more traditional media and, more specifically, to “expose dishonest lightweight Senator Marco Rubio.”

All of the phony T.V. commercials against me are bought and payed for by SPECIAL INTEREST GROUPS, the bandits that tell your pols what to do

How do you fight millions of dollars of fraudulent commercials pushing for crooked politicians? I will be using Facebook & Twitter. Watch!

We cannot let the failing REPUBLICAN ESTABLISHMENT, who could not stop Obama (twice), ruin the MOVEMENT with millions of $’s in false ads!

I will be using Facebook and Twitter to expose dishonest lightweight Senator Marco Rubio. A record no-show in Senate, he is scamming Florida

Don’t believe the millions of dollars of phony television ads by lightweight Rubio and the R establishment. Dishonest people!

Trump has had success posting bombastic comments on platforms such as Instagram and Twitter, while his competitors spend much more money on television and radio ads. But with Trump struggling among late-deciding voters, it’s not clear that doubling down on his social media strategy will succeed in countering a moneyed advertising blitz.