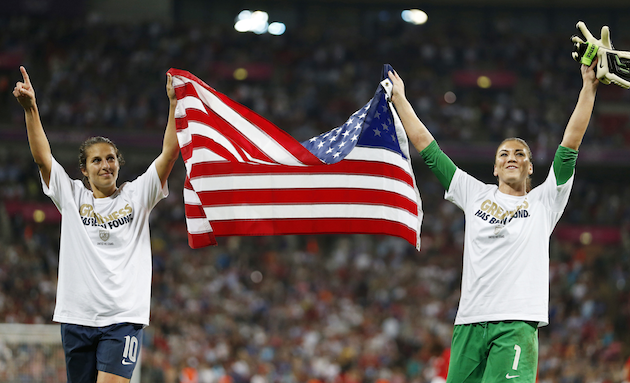 Five members from the US women’s national soccer team, including Carli Lloyd and Hope Solo, are filing a federal complaint against US Soccer to accuse the sport’s governing body of rampant wage discrimination, the New York Times reports.

The complaint, which will be filed on behalf of the entire U.S. women’s soccer team, alleges that top female players only make 40 percent of what their male counterparts earn—despite the fact that the women’s team generated $20 million more in revenue last year alone and consistently attracts  crowds comparable to those who follow the men’s team.

“The numbers speak for themselves,” Solo said in a statement. “We are the best in the world, have three World Cup championships, four Olympic championships, and the USMNT get paid more to just show up than we get paid to win major championships.”

The official filing on Thursday follows previous reports of unequal pay and dismal playing conditions on the field. In December, the women’s soccer team skipped a game in Hawaii to protest such unsafe conditions—a setting, they say, that would never be offered to the men’s team.

“You don’t see the men ever playing on turf,” Hope Solo told Mother Jones. “You don’t see any World Cups being played on turf—even when the major club teams come to America to play on turf stadium, they lay sod.”

In the same interview, Solo called foul on the issue of pay disparity.

“We got a $1.8 million dollar bonus for winning the World Cup and we had to disburse it among 23 players,” she explained. “The men for losing got $8 million to share among the players and they also received millions of dollars for every point that they received in the World Cup.”

No comment yet from the authorities at US Soccer. But it might be worth noting that just this week, the US men’s team failed to qualify for the Olympics for the second time in a row.