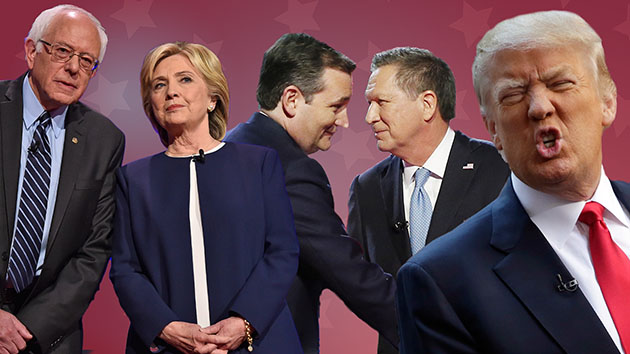 Last week, Donald Trump and Hillary Clinton won big victories in their home state of New York. On Tuesday night, as voters in five more East Coast states cast their ballots, the Republican and Democratic front-runners looked to expand their delegate leads over their rivals.

On the Republican side, Trump is expected to be the night’s biggest winner. Polls show him trouncing Ted Cruz and John Kasich by double-digit margins in Connecticut, Delaware, Maryland, Pennsylvania, and Rhode Island.

Trump, who has so far won 844 delegates, is closing in on the magic number (1,237) necessary to clinch the GOP nomination and avoid a brokered convention in Cleveland. (Cruz trails with 543 delegates and Kasich has a mere 148.) All told, 172 delegates are at stake in Tuesday’s contests. Cruz and Kasich’s best odds for the night are in Pennsylvania. That’s because, no matter the results of the state’s GOP primary, 54 of its 71 delegates will remain unbound heading into the convention. If Trump’s rivals succeed in wooing those free agents, they could potentially stop Trump from hitting the magic number.

On the Democratic side, where 384 delegates are up for grabs, Tuesday’s contests are closer, though Clinton is widely expected to expand her lead over Bernie Sanders. Clinton currently has 1,446 pledged delegates to Sanders’ 1,202, but she leads him among superdelegates 518 to 39; a combined total of 2,383 is needed to win the nomination. Polls show her significantly ahead of Sanders in Pennsylvania, the biggest prize of the night, as well as in Maryland. She holds more modest leads in Connecticut and Delaware. Sanders’ best shot at a win on Tuesday is Rhode Island, where the two candidates are neck and neck.

Democratic delegates are divvied up proportionally, making it hard for either Clinton or Sanders to jump significantly ahead. But as the number of states left on the primary calendar dwindles, Sanders is running out of opportunities to close the gap on Clinton’s lead in the pledged-delegate count—not to mention make inroads with so-called super delegates who largely back Clinton.

The polls close at 8 p.m. We’ll bring you the results here as the races are called.