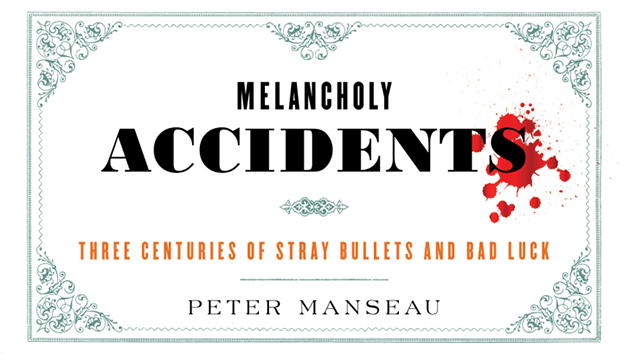 “Melancholy accidents.” That’s what 18th- and 19th-century American journalists used to call those senseless, entirely preventable gun mishaps that end up with somebody dead. Peter Manseau has compiled scores of news briefs about these tragedies from 1739 to 1916, many of them involving children, in his new book, Melancholy Accidents: Three Centuries of Stray Bullets and Bad Luck. Two examples: 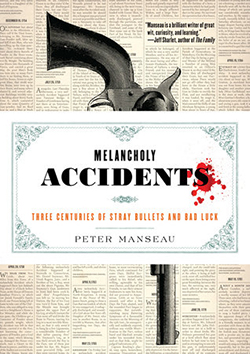 September 3, 1785, Massachusetts Centinel (Boston): The death of Thomas Foxcraft, Esq.; late Postmaster General in Philadelphia, was occasioned by a small coach gun, which he always travelled with, going off half cocked, whilst he was preparing to accompany some friends into the country. A man of more amiable matters or more benevolent disposition never existed.

January 22, 1874, The Eureka Herald (Kansas): A boy in Decatur, Ind., took a double-barrel gun a few days ago to shoot a chicken, and three of his younger brothers followed to see the fun. The boy shot the fowl—then threw the gun with so much force upon the ground as to discharge the other barrel, seriously wounding all the brothers—one it is thought fatally.

Bad luck? Sure, in part. But this is really about stupidity on the part of adults. Today, thousands of Americans are shot accidentally each year, and that doesn’t even count the collateral damage—stray bullets that take out a toddler or some other innocent, resulting in an assault or homicide charge—nor does it factor in our 20,000-plus annual gun suicides. All of these unhappy accidents, as it turns out, are very, very costly.

Taken together, Manseau’s quaint chronicles serve to illustrate how little the citizens of this hyper-armed nation have learned from our collective blunders. Take this writer, whose comments on recent mishaps in the old country—this was before England took steps to rein in firearms—include a scolding that wouldn’t seem out of place today.

February 9, 1792, Maryland Gazette (Annapolis): London—Last week two melancholy accidents happened from fowling pieces. A gentleman of Ellesmere, in Shropshire, accidentally shot his brother-in-law; and a young woman in Worcestershire was killed in the kitchen by a fellow servant, who was ignorant that the gun he was pointing at her was charged. These, with a hundred such like accidents, show the dreadful consequences of leaving loaded guns about a house, and of inattention and carelessness in the handling of them.