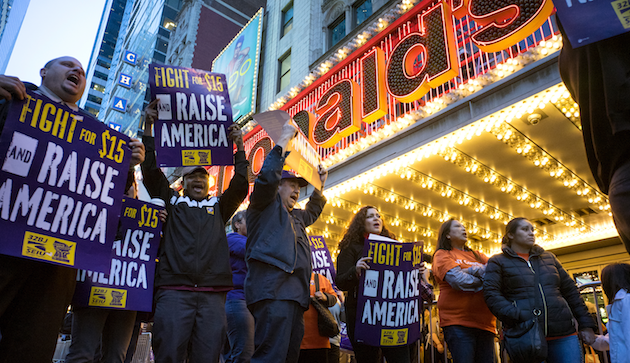 Not to be outdone by its perennial rival on the west, New York announced on Thursday it had reached a deal to raise the minimum wage in New York City to $15 by 2018. New York Gov. Andrew Cuomo hailed the agreement as the “best plan the state has produced in decades.”

“We’re leaders in economic justice,” he said in an announcement outlining the state’s budget.

But unlike California, where lawmakers approved a measure to hike its statewide minimum to $15, the Empire State failed to reach an agreement on a statewide minimum. Instead a hike will go into effect regionally: Areas outside of New York City, including New York’s wealthier suburbs in Westchester and Long Island, will have six years to implement the wage boost. The minimum wage in northern regions that are generally less affluent will only go up to $12.50 by 2021.

The agreement also includes a provision to review the hike’s economic impact with studies that will start in 2019. Based on those studies, the state will determine whether to raise the minimum wage to $15 in the state’s northern counties or suspend it.

While the move to raise the minimum wage to $15 has received increased momentum in cities across the country, New York’s cautious approach is likely welcomed by economists who remain unsure of its impact. On both ends of the political spectrum, there is much debate over how the boost could either be an economic boon for residents or force business owners to cut jobs and lead to economic distress.

For a closer look at how New York is reacting to Thursday’s announcement, jump here.