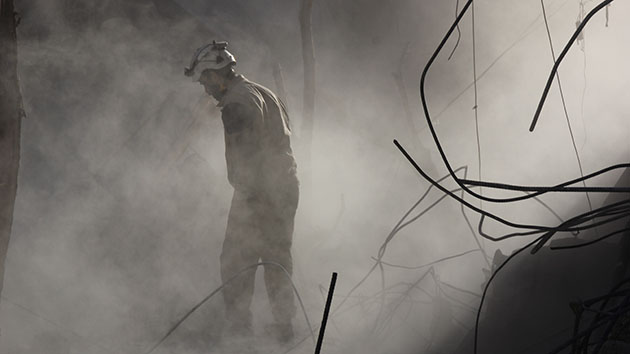 A civil defense member walks at an Aleppo site hit by what activists say was a barrel bomb dropped by forces loyal to Syria's President Bashar al-Assad in November 2015.Ameer Alhalbi/NurPhoto/AP

On Wednesday night, two missiles from the Assad regime’s Syrian Arab Air Force struck the Al Quds hospital in Aleppo, killing at least 14 medical staff and patients, including one of the last pediatricians who still worked in Syria’s largest city. Within 24 hours of the attack, widespread airstrikes and shelling in the area killed at least another 60 people, bringing Syria’s death toll for the week to around 200. Rescue workers from Syria Civil Defense, which lost five of its own members when targeted strikes hit one of its centers earlier in the week, report that they are “still dragging people from the rubble.”

“This devastating attack has destroyed a vital hospital in Aleppo, and the main referral center for pediatric care in the area,” wrote Muskilda Zancada, Doctors Without Borders’ head of mission for Syria, in an online statement. “Where is the outrage among those with the power and obligation to stop this carnage?”

In Syria’s five-year-old war that has claimed hundreds of thousands of lives, the attack on the Doctors Without Borders-supported Al Quds hospital is part of a broader pattern of Bashar Al-Assad’s systematic targeting of civilian infrastructure. Airstrikes on civilian neighborhoods and medical facilities are the norm, despite being illegal under international law. The United Nations estimates that at least half of Syria’s medical facilities have been destroyed. A report from the Syrian American Medical Society (SAMS) from February 2015 estimated that some 600 medical professionals had been killed in the fighting, a figure that doesn’t account for the past year of the conflict.

“Compounding this tragedy is that the dedication and commitment of the staff of Al Quds, working under unimaginable conditions, has been unwavering throughout this bloody conflict,” said Zancada. A press release from SAMS this morning said that Mohammed Wasim Moaz, the last remaining pediatrician in the eastern part of Aleppo, was considered “one of the best pediatricians left in Syria.”

This week’s increased attacks on Aleppo come amid what was supposed to be a partial ceasefire in Syria, but which has all but collapsed. Staffan de Mistura, the UN envoy for Syria, characterized the talks as “barely alive,” the Guardian reports. “How can you have substantial talks when you have only news about bombing and shelling?” he asked.

Meanwhile, many believe the situation in Aleppo will only get worse in coming weeks, with reports of a military buildup around Aleppo that some fear will result in the government’s attempt to embark on a complete siege of the city’s civilian neighborhoods.

“Wherever you are, you hear explosions of mortars, shelling and planes flying over,” said Valter Gros of the International Committee of the Red Cross in a statement yesterday. “There is no neighborhood of the city that hasn’t been hit. People are living on the edge. Everyone here fears for their lives and nobody knows what is coming next.”

In videos of the ongoing violence posted online, rescue workers drag bodies—including those of children—from collapsed buildings, old men sob, residents race injured victims away in cars, and a terrified young girl in pigtails cries quietly in the arms of a man.

A week before the most recent onslaught, Syria Civil Defense—a volunteer organization established in 2013 that attempts to provide help to victims of the massive bombing campaigns—posted a heartbreaking tweet, as new rounds of airstrikes began hitting Aleppo following a brief respite from the fighting under the ceasefire. The tweet foreshadows what appears to be yet another bloody chapter in Syria’s war:

Aleppo City bombed this evening. Today has been a tragic reminder of days we hoped were behind us. #backtowork pic.twitter.com/gVJU2mZFqg

“We return to work with sadness and heavy hearts,” Syria Civil Defense reported a few days later. As the UN warns of a “catastrophic breakdown“—noting that in the past 48 hours, one Syrian has been killed every 25 minutes—the worst may still lie ahead.