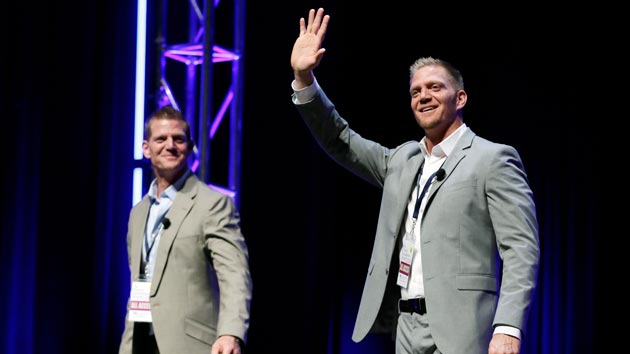 As he worked to rally evangelical voters a week before North Carolina’s March 15 primary, Ted Cruz gave a speech at a church in the Charlotte suburb of Kannapolis, where he was joined by a trio of prominent local social conservative supporters: Charlotte pastor and congressional candidate Mark Harris and the Benham brothers, the telegenic real estate entrepreneurs whose house-flipping show on HGTV was canceled in 2014 when their history of anti-gay activism came to light. At the event, Cruz thanked Harris for “calling the nation to revival,” and called David and Jason Benham “an extraordinary voice for the Christian faith.”

For years, Harris and the Benhams have been at the forefront of every battle to oppose gay rights in North Carolina. This past February, they were at it again, this time against a nondiscrimination ordinance proposed in Charlotte that, among other things, allowed transgender people to use public restrooms based on their gender identity and protected LGBT people from discrimination by public institutions. The advocacy of these top Cruz supporters against the Charlotte ordinance eventually led the North Carolina legislature to push through one of the most sweeping anti-LGBT measures in the country, a law that has caused a national outcry and caused many companies, including PayPal, to scrap plans to invest in the state. The law, the Public Facilities Privacy and Security Act, strikes down all existing and future LGBT nondiscrimination statutes in North Carolina and requires that transgender people use bathrooms based on their sex at birth.

Harris’ and the Benhams’ state activism is significant because, if Cruz wins the presidential race, the considerable influence of these three religious activists could extend far beyond North Carolina. In February, Cruz appointed them to his campaign’s advisory council for religious liberty, along with 16 other conservative Christian leaders. The GOP candidate has promised that this group will “guide his policies to protect religious liberty”—policies that could look very much like the anti-LGBT bill in North Carolina. The group is filled with key players in the anti-LGBT world, including Tony Perkins, the head of the Family Research Council (which is classified as an anti-LGBT hate group by the Southern Poverty Law Center); it has already recommended that Cruz, if elected president, should stop federal employment discrimination protections for LGBT people, direct federal agencies to change their interpretation of “sex” to exclude sexual orientation and gender identity, cancel the mandate that employers provide contraceptive coverage, and much more. Cruz has surrounded himself with this group of anti-LGBT heavyweights, and the work of Harris and the Benhams in North Carolina provides a glimpse into what this group can accomplish when it comes to rolling back LGBT protections in the name of religious freedom.

Harris and the Benhams first rose to prominence in 2012, when they helped organize the movement to pass a North Carolina constitutional amendment banning same-sex marriages and civil unions. The Benhams—who are sons of an evangelical minister, and who had previously worked to quash local pride parades and organize anti-abortion protests—testified in favor of the measure and at one point equated the battle against marriage equality with fighting Nazis. Harris has been a well-known Baptist minister in Charlotte since 2005 and his church contributed more than $50,000 to the campaign to ban same-sex marriage. (The amendment passed but was invalidated in 2014 after a Supreme Court ruling.)

“All the social-issue stuff was bottled up with no outlet. But once you had the Republican legislature, you could just go wild.”

Their temporarily successful work against same-sex marriage illustrated the growing power and influence of the state’s social conservatives. Fueled by millions of campaign dollars from a few conservative megadonors, Republicans took over both chambers of the state legislature in the 2010 election, fueled by voters’ economic dissatisfaction. Once in power, legislating social issues was a logical next step for this group of newly elected conservatives, says Steven Greene, a political-science professor at North Caroline State University. By 2012, the General Assembly made one of its first moves in this direction by voting to put the ban on same-sex unions onto that year’s ballot. “Before 2010, we were largely under Democratic control,” Greene says. “All the social-issue stuff was bottled up with no outlet. But once you had the Republican legislature, you could just go wild.”

In 2014, when HGTV pulled the Benhams’ show after journalists revealed their anti-gay activism, the brothers became social conservative heroes. They then wrote their first book, Whatever the Cost, about their sacrifice for their faith. Soon after, in February 2015, Charlotte introduced its anti-discrimination ordinance and Harris and the Benhams snapped into action. Faith Matters NC, a grassroots religious liberty group vice chaired by Harris, took out a radio ad on a conservative talk radio station in Charlotte. “I’d be really scared if a man shared a bathroom with my daughter,” says a woman in the ad, of the bill’s provision allowing public-restroom use based on gender identity. “This nightmare could become a reality right here in Charlotte if we don’t speak up quickly,” she continues, encouraging listeners to contact their city council members and demand that they vote down the “bathroom bill.”

The Benham brothers, meanwhile, headlined a rally to promote biblical values at Charlotte City Hall. And on a conservative radio show David Benham called the bill part of “the radical gay agenda’s plan to change America.” He also penned an op-ed for the Charlotte Observer opposing the bill: “Clearly, this ordinance isn’t really about non-discrimination,” he wrote. “It’s about forcing the acceptance of behavior.” With his father, Flip, a well-known anti-gay street preacher in Charlotte, David addressed the city council on the day they voted on the ordinance. During the meeting, a transgender woman collapsed after giving her testimony. Flip Benham reportedly laughed and poked fun at her gender while she lay on the floor awaiting medical attention. He also allegedly confronted a transgender girl as she walked out of the bathroom, calling her a “pervert” and “young man.”

“Clearly, this ordinance isn’t really about non-discrimination,” he wrote. “It’s about forcing the acceptance of behavior.”

The bill failed in 2015 but was reintroduced the following year. Once again, Harris and the Benhams led the opposition: Harris, for instance, held meetings at his church for the “Don’t Do It Charlotte” campaign, and all three headlined a rally opposing the measure. Despite their efforts, the ordinance passed in February 2016. Several weeks later, on March 18, opponents of the measure held a press conference in front of a city government building to urge state lawmakers to override the ordinance. David Benham was the opening speaker: “We sure hope the governor and General Assembly will do what is right,” he said. Harris gave the closing speech: “Governor McCrory and the General Assembly must act now to protect women and children all across North Carolina,” he said. He urged the governor to call for a special session to undo the Charlotte ordinance.

Five days later, that’s exactly what happened. In a hastily convened special session, legislators in the Republican-controlled assembly introduced, debated, and passed HB 2, the Public Facilities Privacy and Security Act, in less than 12 hours. Lawmakers had five minutes to read the bill, and Democratic legislators walked out of the assembly in protest. The rushed passage of HB 2 and the law’s broad scope gained national attention, in part because the bill’s language invalidates all local nondiscrimination statutes in the state, not just those tied to protecting the LGBT community. “Make no mistake: While LGBT folks were clearly the political target, everybody lost rights,” Democratic state Sen. Jeff Jackson told Charlotte TV station WCNC. The bill also prohibits a locality from setting a minimum wage standard for private employers, and it limits how citizens can file claims of discrimination based on factors like race, religion, nationality, biological sex, and more.

When asked about their involvement in pushing for HB 2’s passage, the Benham brothers, in an email to Mother Jones, wrote: “Before the bill was passed we had already been notified by the Governor that legislative action was certain, so we simply encouraged our elected officials to listen to the voice of the people.” They continued, “It’s common sense not to allow men in women’s restrooms. It’s also common sense not to force business owners to participate in expressive events that are against their religious beliefs.”

For Cruz, who has staked his campaign on winning over evangelical voters, Harris and the Benhams made natural allies. And as Cruz plotted his presidential bid, he sought to woo these influential social conservatives. In 2014, Cruz headlined a religious rally at Harris’ Charlotte church. That same year, Cruz reached out to the Benhams to express his support after HGTV dropped their show. Then last November, the Benhams emceed a Cruz rally for religious liberty in South Carolina, and in January 2016 they formally endorsed Cruz for president. The following month, Harris endorsed him as well. “Mark’s commitment to be a guiding light in the cultural and political arenas has impacted Christians in North Carolina and across the nation,” Cruz said in a press release trumpeting the endorsement.

Supporting Cruz may bring political benefits for Harris, too. Two days after the HB 2 victory, Harris announced he would be running for Congress to protect “liberty, faith, and family.”

“Mark’s commitment to be a guiding light in the cultural and political arenas has impacted Christians in North Carolina and across the nation,” Cruz wrote.

Mark Knoop, the campaign’s spokesman, said that since starting his own campaign, Harris “is entirely focused on his own campaign,” and has put his role as a religious liberty adviser to Cruz “on the backburner.”

The impact of the work of Harris and the Benham brothers in North Carolina has caused national backlash. As word spread of the state’s new law, more than 120 major corporations, including Apple, American Airlines, and PayPal, urged the governor to repeal the bill or to face dire business consequences. In response, the Benham brothers wrote an op-ed for conservative website World Net Daily defending the governor: “Once the media started reporting, you would’ve thought the governor had joined ISIS!” wrote the brothers. “They’ve crafted the narrative in the media that North Carolina’s HB2 is against LGBT individuals, yet nothing could be further from the truth.” (On Tuesday, the state’s Gov. Pat McCrory responded to the backlash with an executive order granting LGBT protections only to state employees.)

Harris’ campaign makes a similar point. “Its not like North Carolina is persecuting the LGBT community,” says Knoop. “The whole point is that people going to a bathroom are going to the right bathroom.” When asked to elaborate on Harris’ stance on portions of HB 2 unrelated to bathroom use, including the part that invalidates the state’s LGBT nondiscrimination ordinances, Knoop declined to comment.