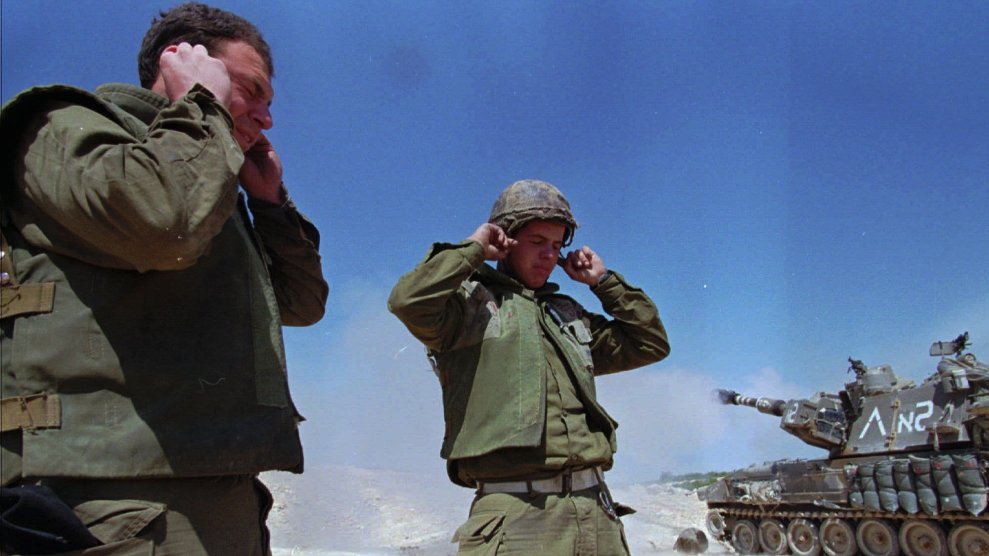 In 1999, a Canadian-Israeli teenager named Matti Friedman went to war as an Israeli soldier. He manned a small hilltop outpost called the Pumpkin, one of a string of Israeli bases that stretched across southern Lebanon and served as both a defensive buffer for the towns of northern Israel and a magnet for attacks by Hezbollah fighters. But while thousands of Israeli soldiers served at such outposts in that “security zone” during the 1980s and 1990s, Friedman says their war has been forgotten—not just in Israel but in the United States and other countries that would soon find themselves in similar conflicts.

“People lost friends, they lost limbs, they lost kids—and basically no one’s talked about it since it ended,” says Friedman, who is now a freelance journalist in Israel and the author of Pumpkinflowers, a newly released memoir of his time at the outpost. It’s both an instant-classic war diary—Friedman’s intensely self-aware writing captures all the flavors of boredom, humor, and occasional panic that marked life in Lebanon—and a brief, fascinating history of Israel’s occupation of southern Lebanon. The second part is necessary, he says, because Israeli society is allowing the conflict to simply fade away. He points out that the war in southern Lebanon hasn’t been given “a name or a military ribbon or a monument or a history.” Even his term for it, the “security zone war,” is one he coined himself.

“It left very deep personal memories for people but it left basically no collective memory,” Friedman says. “When I was doing research I was constantly trying to explain to people what [war] I meant.” Pumpkinflowers, he hopes, will convince Israelis—and others—to start “writing about it and thinking about it as a period that’s worth remembering.

“It left very deep personal memories for people but it left basically no collective memory.”

Friedman recently spoke with Mother Jones about the book, which was published on May 3.

Mother Jones: Since Iraq and Afghanistan, there have been numerous memoirs published in the United States about war from the same perspective of yours, that of young soldiers and officers. Are similar books being written in Israel?

Matti Friedman: There isn’t a lot of war writing of this kind in Israel. We don’t have a lot of recent war memoirs. Probably the most famous war memoir in Israel written recently was actually about the war of independence in 1948. But the more recent wars—like the one in Lebanon and the West Bank and things like that—have produced very little of value.

MJ: Do you think there’s a reason for that?

MF: There’s a few things. A lot of the military service in the past 20 years or so hasn’t been a war like the Six Day War or the ’73 war. It’s not something that’s dramatic, and a lot of the guys like me come back to civilian life and the society basically gives you no indication that what happened to you was important. I think a lot of young Israelis think that the great history has already happened and now what we do is kind of bullshit. Except that the kind of war that we saw in Lebanon—which is mostly waiting around punctuated by moments of terror and this very hard-to-understand, very complicated political situation—that’s the way wars look now. So we have to find a way to write about them, because that’s the way it works in the 21st century.

MJ: Are there things in the news now, or in more recent conflicts, that remind you of Lebanon?

MF: I remember seeing pretty early in Iraq a video, a kind of jumpy militant video. You see American military vehicles traveling along the road with the logo in the corner of whatever militant faction it was and a martial soundtrack in the background, and then something explodes. That’s pure Lebanon. That’s right out of the Hezbollah textbook. One of the first effective videotaped attacks happened at Outpost Pumpkin in 1994.

When I started hearing about IEDs—people were losing their legs, vehicles were being hit by these kind of devices that were buried under the road or beside the road—that was Lebanon. That was the major threat in Lebanon. And, just in general, the experience of seeing a strong, technologically-savvy Western military on hostile territory, with kind of amorphous goals fighting an enemy that is, on paper, much, much weaker—but is also more determined and ends up being stronger in weird kinds of ways. It’s so clear to me that that was the laboratory where 21st century warfare was developed. That was the first war of the 21st century, and there’s a lot to learn from that period.

MF: If you look at the Israeli experience in Lebanon, you understand that it’s a bad idea to get involved in an enterprise without a concrete plan of what you’re supposed to accomplish and how you’re supposed to get out—which I think Americans have understood anyway. But that was, for me, what we learned in Lebanon: that we went in and we just didn’t have a plan for getting out, and we ended up staying for years and years and years with goals that were very amorphous and ultimately unattainable.

“We went in and we just didn’t have a plan for getting out, and we ended up staying for years and years and years with goals that were very amorphous and ultimately unattainable.”

MJ: A lot of reviews compared your book to Michael Herr’s Dispatches, which is a famous Vietnam memoir that helped inspire Apocalypse Now. What war books did you read while you wrote Pumpkinflowers?

MF: I was reading World War I writing. There was something about their cool attitude toward writing about this stuff. Their books are not exciting descriptions of combat. It’s not cinematic, it’s not influenced by television or by war movies. They couldn’t use obscenity, they couldn’t describe violence too much, they couldn’t talk about sex. They were limited in what they could write, and it makes their works better because it forces them to be oblique—and that ends up being a good way to write about this stuff. More than anything, I like the way that they were writing in the first person but they weren’t egotistical. Somehow they managed to write books in the first person that weren’t really about them—they were about their generation, they were about the experience as seen through their eyes. They weren’t picking at their own soul and making a big deal of themselves. That struck me as a good way to do it.

MJ: The last part of the book is about going to Lebanon in 2002 and your visit to the Pumpkin as a civilian. Have you ever had any contact with anyone who fought against you or other Israelis during the security zone war?

MF: No, although I am sure that there is someone like that living in Ottawa now, or somewhere in the states, and I would love to meet that person. And you know what? You never know. You never know who could read that book and write me an email. I could get a crazy Facebook message this evening that says, “Oh, you were near Nabatiyeh in 1998. That’s interesting, do you remember this?” And of course, I dream of things like that happening. That’s what I want to happen. We’ll see if it happens.