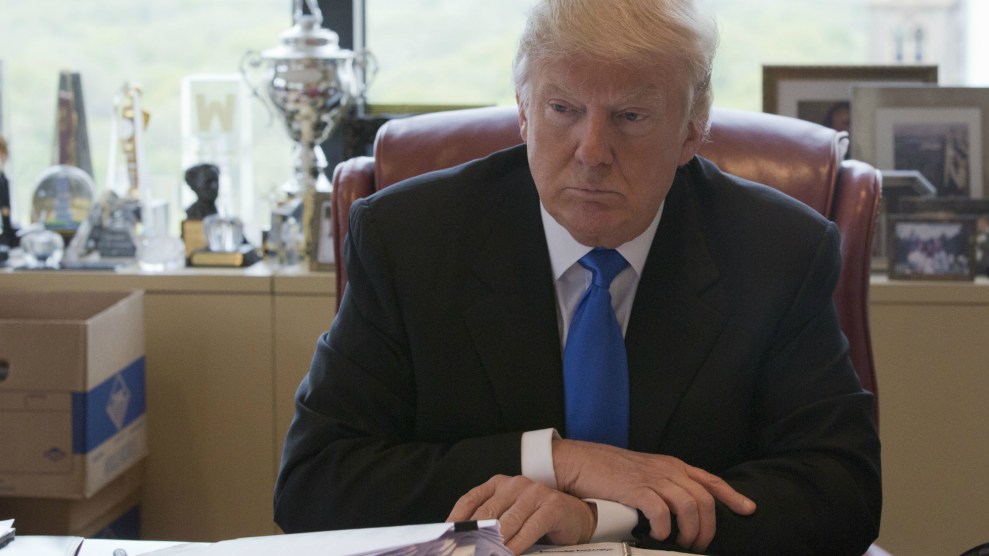 Donald Trump hasn’t let his presidential candidacy get in the way of making deals. According to a financial-disclosure form filed by the presumptive GOP nominee’s campaign on Wednesday, Trump has continued to establish new companies and expand his business empire. The disclosure shows that Trump still maintains many complicated business dealings around the globe, probably worth billions of dollars. But whether he is worth $10 billion, as his campaign claims, is far from clear—his financial disclosure lists hundreds of millions of dollars in assets and liabilities, without disclosing the exact values of his holdings. What the document also doesn’t reveal is whether or not Trump’s businesses have suffered due to his controversial campaign trail statements, nor does it provide a picture of how much he pays in taxes or donates to charity.

Trump’s financial disclosure is more than 100 pages long and details his stock holdings, real estate investments, and the income from his various business interests. It also lists his various liabilities (including the mammoth mortgages he has taken out on some of his properties). Two factors complicate the matter of figuring out how well Trump is actually doing. First, the value of Trump’s assets and debts is generally reported in ranges; for assets valued at more than $50 million, the upper range is left open-ended. For example, Trump reportedly spent more than $847 million building the Trump Tower in Chicago, on land that he paid more than $73 million for, but his disclosure simply describes the property as worth more than $50 million. Likewise, Trump lists a loan for $50 million or more (at an interest rate of prime, plus 5 percent) connected to his Chicago hotel operation. The actual value of the building and how much Trump owes on it are completely obscured. Secondly, there are signs that Trump has counted income on this year’s report that he also included on a previous financial disclosure, filed last summer. That makes it impossible to assess how Trump’s ventures are faring.

Trump’s disclosure does show that his presidential campaign has boosted sales of his books. He reported an increase in royalties from several of his older titles and $1 million to $5 million in royalties from his latest book, Crippled America, which was published in November.

Trump has also added to his debts, or at least the minimum amount that he owes to creditors. This year Trump reported a number of new loans and mortgages, and he now has a total of at least five loans for $50 million or more. Based on the minimum value of all his loans on his most recent financial disclosure, he owes creditors a minimum of $315 million, which is $50 million more than he reported owing creditors last year.

Trump’s personal assets are scattered among a list of more than 150 corporations and limited liability corporations, many of them based in Delaware. It’s clear he has not stopped trying to expand his business empire network, even if it’s impossible to say whether it has suffered from his controversial statements, including his proposed ban on Muslims entering the US.

Last August, for instance, he formed new corporations to manage a proposed new Trump skyscraper in Jeddah, the Saudi Arabian city that is the gateway to Islam’s two holiest sites. And in late April, he formed a new venture dubbed TC Marks Buenos Aires LLC—a company that will most likely be used to license his brand in Argentina. Just days after establishing this company, he caused a minor furor in Argentina after declaring that failure to elect him president would lead the United States into a decline. “It will be a totally different country…It will be Argentina…it will be Venezuela,” he told CNBC.

Just because Trump lists a new venture, however, doesn’t mean it represents a thriving business concern. Among Trump’s newly disclosed businesses are companies connected to deals he has inked to build resorts in Indonesia, projects that appear to be going ahead full steam, despite opposition from politicians in Jakarta. Other new companies, including one to manage a proposed hotel in Kolkata, India, may be more aspirational.

The new filing also sheds no light on his plan to partner with the controversial son of an Azeri oligarch to open a new hotel in Baku, Azerbaijan. The corporations set up by Trump to license his name to the project, as well as income from a deal to manage the property, remain on Trump’s disclosure even though the project has never opened and any mention of it has vanished from Trump’s website.