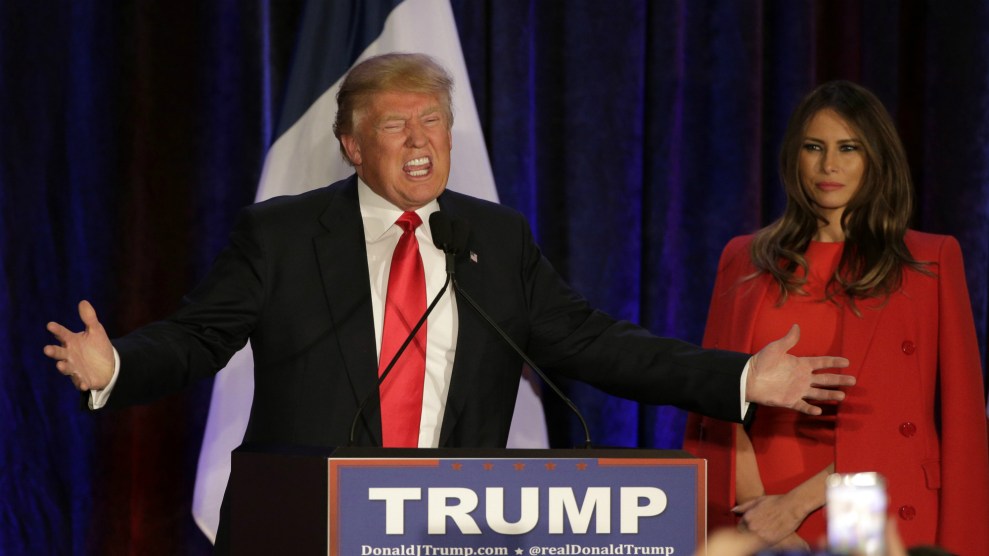 Maybe Corey Lewandowski got out at the right time. While reporters scrambled on Monday to figure out why Trump let his campaign manager go, the campaign was preparing to release its latest campaign finance filing that looks, at least at first glance, to be devastating. It doesn’t look much better on second glance.

The first glance: Hillary Clinton’s campaign has more than 35 times the cash Trump’s does.

Here’s the second glance: Ted Cruz dropped out of the GOP primary on May 3, meaning that for the month of May, Trump was all but assured the nomination and the campaign should have been in prime fundraising mode. But it wasn’t. Even taking into account Trump’s long-stated claims that he had no interest in raising money from others (something he has reversed himself on)—filings the campaign made with the Federal Election Commission late Monday evening show that Trump simply couldn’t get any fundraising momentum going. He raised a grand total of $5.6 million from May 1 to May 31, $2.2 million of which was in the form of loans from Trump personally.

That’s very bad. It means Trump raised just $3.4 million from people other than himself. His vanquished opponent Cruz, whose campaign had melted away, raised $2.6 million over the same time period.

Trump’s fundraising has always been anemic and the campaign has always relied heavily on loans from the real estate magnate, but barely beating his defeated opponents isn’t a good look. Hillary Clinton’s campaign raised $26.3 million in May. It was only her third best fundraising month. But unlike the other top months, which came at the height of the primary against Bernie Sanders, Clinton wasn’t spending money as fast (or faster) than she could raise it. Clinton managed to bank the bulk of her May fundraising, which is how she now has $42.4 million on hand.

Trump, who spent more than he raised, has $1.2 million in cash on hand. True, Trump has always had very little cash on hand at the end of a reporting period. But this was because he was writing the checks and didn’t need to keep cash on hand. But now that Trump insists he won’t be self-financing, those low numbers are a problem. Even if Trump significantly increased his fundraising since May 31, he would have to be raising money at an almost unprecedented rate to catch up to Clinton.

It’s not just the low numbers that portend potential disaster for the GOP’s man. It’s the way he arrives at the low numbers that looks scary. There’s no real significant support from top donors—the bedrock of a strong monthly fundraising report. But the Trump campaign picked up just 133 donations that hit the maximum allowed amount of $2,700. Clinton had more donations of $2,700 on just May 17 (140) than Trump had all month, and almost 15 times as many for the entire month (1,981).

Elsewhere in Trump World things are looking just as bleak. While some of the super-PACs that have sprung up to back Trump have yet to file (and at least one major one won’t be filing any information at all until next month), the Great America PAC, which fashions itself as the only “real” Trump super-PAC, has just $501,000 in cash on hand. Compare that to the main pro-Clinton super-PAC, Priorities USA, which has nearly $52 million in cash on hand.