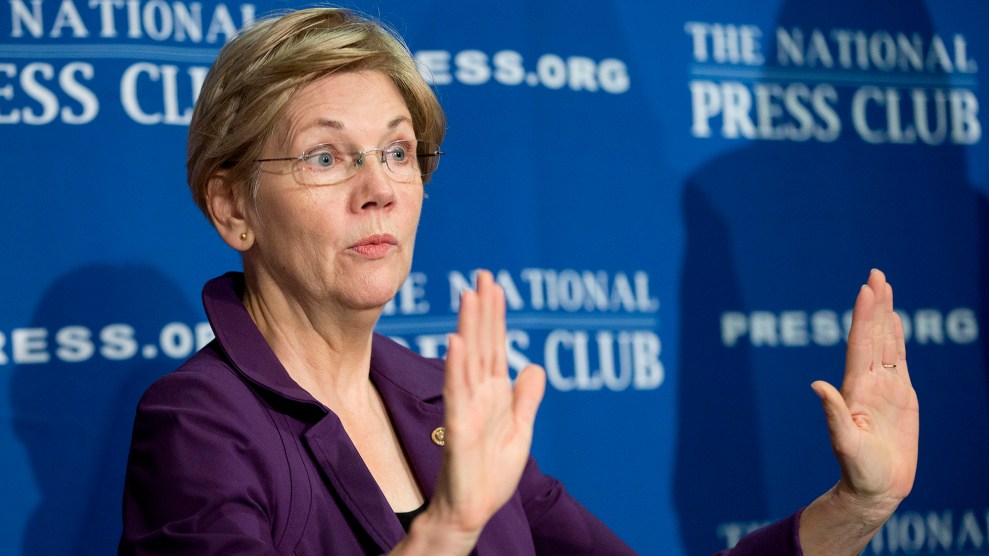 Warren is amping up her rhetorical barrage against Trump, expanding it to tie other Republicans to the more hateful aspects of the GOP’s presidential candidate’s campaign. On Thursday evening, the Massachusetts senator will speak at the opening dinner for the American Constitution Society’s national convention and, according to excerpts of her prepared remarks, Warren sees Trump’s recent attacks on a federal judge presiding over the case against Trump University as one of the more damaging parts of his presidential run—while also pointing out that it’s just a degree of difference from how Republicans in Congress have attacked President Barack Obama’s judicial nominees.

Warren—who has recently been floated as a potential VP pick for Hillary Clinton, even though she is one of the few senators yet to endorse the presumptive Democratic nominee—hasn’t been shy about name-calling when it comes to Trump, and she doesn’t plan to stop on Thursday night. “Donald Trump is a loud, nasty, thin-skinned fraud who has never risked anything for anyone and serves nobody but himself,” she will say. “And that is just one of the many reasons why he will never be President of the United States.”

Warren plans to hammer Trump over his racist attacks against Judge Gonzalo Curiel, who is overseeing the pending case against Trump University. “Judge Curiel has survived far worse than Donald Trump,” Warren will say. “He has survived actual assassination attempts. He’ll have no problem surviving Trump’s nasty temper tantrums.”

Earlier this week, Warren released a report highlighting how Republicans in Congress have delayed confirmations for Obama’s judicial nominees. As Mother Jones has reported, since gaining the Senate majority in the 2014 midterms Republicans have blocked Obama’s nominees at a historic rate. Speaking before ACS, a left-leaning legal group, Warren will claim that Trump’s attacks on Curiel are just an extension of the strategies used by Senate Majority Leader Mitch McConnell and House Speaker Paul Ryan to discredit Democratic-appointed judges—particularly Supreme Court nominee Merrick Garland. “Paul Ryan condemned Trump’s campaign for its attacks on Judge Curiel’s integrity,” Warren will say. “Great. Where’s Paul Ryan’s condemnation of the blockade, the intimidation, the smears, and the slime against the integrity of qualified judicial nominees and Judge Garland?” After all, Warren plans to say, by endorsing Trump, Ryan and McConnell are essentially saying he should have the power to choose the next generation of federal judges. “Donald Trump chose racism as his weapon, but his aim is exactly the same as the rest of the Republicans. Pound the courts into submission to the rich and powerful.”