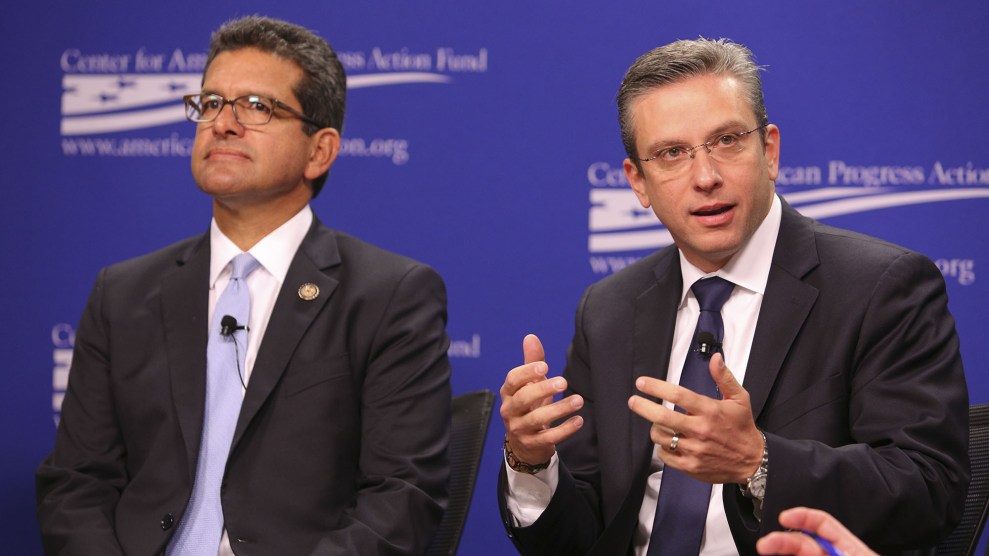 The governor of Puerto Rico said Thursday that even if he completely shut down the island’s government, there would not be enough money to cover the roughly $2 billion in debt payments due July 1.

“Defaulting is not an option,” Gov. Alejandro Garcia Padilla said during a panel discussion on the Puerto Rican debt crisis that took place at the Center for American Progress on Thursday. “It’s just a reality. We do not have the money. I cannot opt out or refuse to pay. It’s an issue that the money is not there.”

Garcia Padilla is in Washington, D.C. this week to urge lawmakers to pass the PROMESA bill (the Puerto Rico Oversight, Management and Economic Stability Act). On June 9, the House of Representatives passed the measure, which allows for the restructuring of Puerto Rico’s roughly $70 billion in debts by a controversial financial review board, nominated by Congressional leadership and appointed by the President.

The bill, currently awaiting Senate approval, would allow the Puerto Rican government to restructure the debt with 18 different creditors, and put on hold 14 different debt-related lawsuits. This would ensure that the island’s government could keep providing essential services to the island’s 3.5 million residents. Puerto Rico owes more than $800 million in general-obligation bonds, according to Bloomberg, part of a $2 billion principal and interest payment due on July 1. A default on the general-obligation debt would be the first by a state-level borrower since Arkansas defaulted in 1933, Bloomberg observes.

The panel discussion took place shortly after House Democrats staged a 26-hour sit-in on the House floor to protest House Republicans’ refusal to vote on a bill to prevent those on the no-fly list from buying guns. During the sit-in, Republicans announced they had a deal on a $1.1 billion emergency financing plan to combat the Zika virus, a major problem in debt-riddled Puerto Rico as the virus sweeps across the island. It’s unclear what part of the $1.1 billion would be directed to Puerto Rico.

Garcia Padilla said that unless the PROMESA bill passes the Senate and is signed by the President, essential services will be cut, including what little the government could do to fight the spread of Zika. He said that the island faces no fuel “for patrol cars and fire truck,” or funds for special education or the operations of the medical center.  Simon Johnson, a professor of entrepreneurship at MIT and former chief economist at the International Monetary Fund agreed. “If it’s not done by July 1, I think the nightmare scenario is already upon us,” he said.

Rep. Pedro Pierluisi, the island’s non-voting representative to Congress sat next to the governor Thursday and observed, “The government of Puerto Rico is about to collapse.”

Many Puerto Ricans view the proposed financial review board with suspicion, concerned that it would close schools, lay off government employees, and affect pensions. Hundreds have protested in the streets of San Juan in recent weeks opposing the plan. But Pierluisi said that most opposition to the financial review board is based on “misinformation” and “semantics” and that the board would have to allow the governor to continue to provide essential services and meet pension obligations.

The current bill does insure that any plan approved by the board allows for essential services and pension obligations, but also gives the board power to prohibit public employees’ participation “in a strike or a lockout.” In addition, the measure requires that the island’s cash-strapped government pay the initial $2 million to fund the board, which would not be subject to any oversight by the island’s governor or legislature. The board would dissolve if the island has acceptable budgets for four consecutive years and those budget targets are met.

“I do not like the board,” Padilla said. “I do not like that it doesn’t add a mechanism to make our economy grow. But what’s the alternative right now? Without the bill, fixing the Puerto Rican economy will be like building the Eiffel Tower with a screw driver.”

One lawsuit, filed Tuesday in New York on behalf of several bondholders, puts the July 1 deadline in stark context. The bondholders—suing over a Puerto Rican law passed in early April that created a debt moratorium—are asking a court to order the island’s government to pay them before providing essential services for citizens.

“It has long been settled law that Constitutional Debt is constitutionally required to be paid first in times of scarcity, ahead of even what the government deems ‘essential services,'” the lawsuit states.

“If anyone had any doubt about what would happen on July 1st, [the lawsuit] that was filed by hedge funds in New York on Tuesday puts those doubts aside,” said Antonio Weiss, counselor to Treasury Secretary Jack Lew during Thursday’s panel.