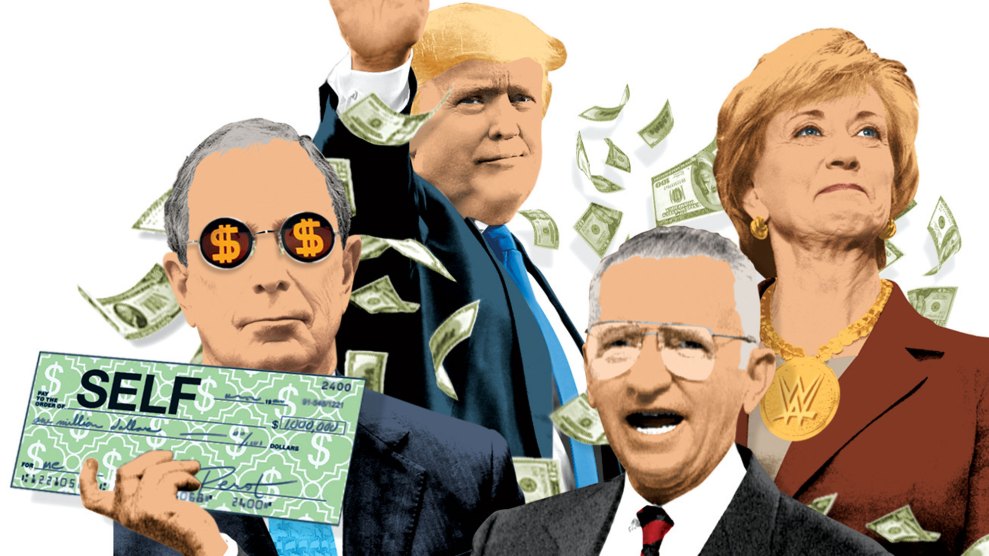 Illustration by John Ritter/Photos Clockwise From Top: Reuters (3) and AP

Following the latest reports of Donald Trump’s dismal presidential fundraising, the self-professed billionaire insisted he could bail himself out. “If need be, there could be unlimited ‘cash on hand,’ as I would put up my own money,” he said in a statement. Trump has been insisting that he can single-handedly finance his campaign for months. “I’m self-funding my own campaign,” he boasted in February.

So far, more than 70 percent of his campaign’s funds have come from loans he’s made to himself. (Among the top recipients of his campaign spending are his and his family’s businesses.) If Trump’s really going all the way on his own dime—which is unlikely—he’ll have to beat the historically poor showing of self-funded candidates.

Spent $72 million running for president, 1992/1996
The Texas billionaire dipped deep into his pockets to finance his ill-fated runs, including spending $2.9 million in 1992 to air 30-minute TV ads such as the chart-laden infomercial called “Chicken Feathers, Deep Voodoo, and the American Dream.”

Spent $28 million running for the US Senate in California, 1994
Huffington, then married to future napping guru and media mogul Arianna, spent a record amount on his Senate race, prompting another Republican to decry the “increasing power on the part of moneyed interest.” The naysayer: Mitt Romney, who later pumped $45 million into his 2008 presidential run.

Spent $144 million running for California governor, 2010
The ex-eBay CEO bid high for the Golden State’s top job but was shut out by Jerry Brown, who spent 80 percent less.

Spent $250 million running for New York City mayor, 2001/2005/2009
Bloomberg has spent more of his personal wealth in (successful) pursuit of office than any other American. When he floated the idea of a 2016 presidential bid, sources said he was willing to spend at least $1 billion.

Spent $99 million running for the US Senate in Connecticut, 2010/2012
McMahon, the former CEO of World Wrestling Entertainment, got body-slammed in back-to-back races in which she put up more than 95 percent of her campaign budget. “It’s an incredible amount of money to spend on a campaign,” she conceded after her second loss.

Spent $7 million running for the US Senate in Vermont, 2006
In the annals of self-funded candidates, Tarrant is a small fry. But the Republican will be remembered for blowing his wad on negative ads and still getting burned by Bernie Sanders.

Spent $76 million running for president, 1996/2000
George W. Bush scrambled to raise more than $100 million in 2000, partly out of fear of the flat-tax advocate and Forbes editor’s family fortune. Yet Forbes gained little traction in his runs, proving once again that self-funding your political career may be, in the words of his eponymous business mag, “the worst political investment.”