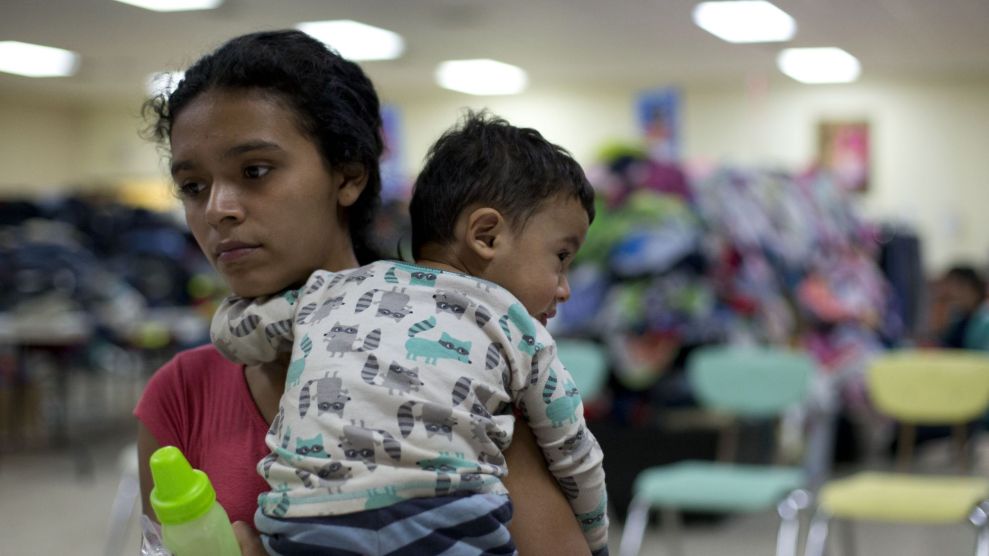 The American Civil Liberties Union filed a lawsuit against the Department of Health and Human Services, the Office of Refugee Resettlement, and the Administration of Children and Families last week, alleging that the government agencies knowingly gave millions of dollars to religious organizations with a record of denying contraception and abortion services to unaccompanied minors—most of whom are fleeing violence—in their care. This is the latest in a string of lawsuits the ACLU has filed against HHS and several Catholic organizations over the last year for refusing to provide access to reproductive services, despite government rules mandating them to do so.

Under federal law, HHS is required to ensure that unaccompanied minors are “promptly placed in the least restrictive setting that is in the best interest of the child,” a program that is managed through the agency’s Office of Refugee Resettlement (ORR). Immigration officials refer minors arrested at the border to ORR, after which ORR places them in facilities throughout the state and is supposed to provide them with a number of services, including access to legal help, education, and physical and mental health care. If children experience sexual assault while in federal custody, the ACLU notes, HHS is also required to provide “unimpeded access to emergency medical treatment, crisis intervention services, emergency contraception, and sexually transmitted infections prophylaxis.”

That turns out to be a problem, because religiously affiliated organizations that receive grants from HHS, such as the United States Conference of Catholic Bishops, which issues grants to Catholic charities across the country, have explicitly objected to and forbidden their subcontractors from providing access to abortion and contraception. This isn’t the first time HHS and USCCB have come under scrutiny over the religious organization’s refusal to provide reproductive health services to women. In 2012, USCCB lost one of its human trafficking grants with HHS because it refused to comply with new regulations requiring it to provide contraception and abortion. In December 2013, the ACLU filed suit against USCCB on behalf of a woman who had a miscarriage and was denied treatment at a hospital operating under one of USCCB’s directives. Nonetheless, HHS approved grants of nearly $30 million to USCCB in fiscal year 2014, according to federal audit filings, of which nearly $10 million was for unaccompanied minors.

In one case presented in the ACLU’s complaint, Catholic Charities of the Archdiocese of Galveston-Houston, a charity that operates a number of federal programs for unaccompanied minors and refugees, stated in its 2014-15 grant application that it did not discuss family-planning practices with its clients and, due to its philosophy and policies, encouraged abstinence. HHS approved the grant anyway, according to the ACLU. Federal audit filings show that from 2012 to 2014, HHS gave the group more than $16 million for its unaccompanied-minors program alone.

The ACLU argues that by continuing to give grants to USCCB and its subcontractors, HHS is favoring religious institutions and allowing them to flout these minimum requirements for the care of unaccompanied minors. Additionally, it’s also authorizing practices with “extraordinary consequences” for young women in federal custody.

“When they arrive, they’re alone and afraid and abused, and the very last thing we should be doing is denying them critical medical services.”

“These young women in particular have an acute need for reproductive health care because they’ve experienced abuse and torture on their way to the country and in the US,” Jennifer Chou, an attorney with the ACLU of Northern California, told Mother Jones. “When they arrive, they’re alone and afraid and abused, and the very last thing we should be doing is denying them critical medical services.”

More than 30,000 unaccompanied minors were referred to ORR custody during the last fiscal year. Most of them were boys over the age of 14, but the number of girls crossing the border has steadily increased over the years. Girls now account for about a third of all unaccompanied minors in detention. Though there are no exact numbers on the prevalence of sexual assault among unaccompanied minors, nonprofit groups such as Amnesty International have reported that girls are at serious risk of being sexually assaulted or raped during their journeys over the border.

Chou says at least 24 women have requested abortions over the last five years, but that the number only reflected cases where women were referred to ORR for reproductive services. Michelle Brané, director of the Migrant Rights and Justice Program at the Women’s Refugee Commission, a New York-based nonprofit focused on women and children’s rights, says these numbers are not insignificant. “Reproductive services are really critical for this population,” said Brané. “We know that many encounter gender-based violence on their journey and are at risk for it when they get here.” Timing is also an important factor, says Brané, since girls often discover that they’re pregnant only once they’re in custody, and “you don’t know how long it’s been since they became pregnant.”

“They really have no outside support, and they don’t have access to much outside services, so limiting their access can be really problematic,” she continued.

Through a FOIA request, the ACLU obtained documents that revealed several instances of women being shuttled from one ORR facility to another because they had requested abortions. In one example, the ACLU described “Rosa,” a 17-year-old woman who was raped on her journey to the United States. After discovering that she was pregnant, Rosa threatened to commit suicide and was hospitalized for suicidal ideation, but upon her release she was denied re-entry to the Catholic Charities facility that had initially housed her. Another religiously affiliated charity also refused to accept her. Rosa was eventually transferred to another facility and received an abortion, according to the ACLU’s complaint.

In another case presented in the complaint, ORR wanted to transfer one 17-year-old to a facility on the East Coast, Youth for Tomorrow, so she could be near her siblings. ORR decided against it because of the group’s religious stance. “YFT would be unable to take this youth,” one ORR official stated. “YFT is a religious organization and is pro-life. I just had a UAC [unaccompanied alien child] who requested that she wanted to terminate her pregnancy and I had to transfer her due to YFT’s position on abortion.”

By transferring women to other facilities, the ACLU argues, HHS facilitated in “the ostracization of young women” and uprooted them from their support networks and legal representation. When abortion became an issue, providers placed women at shelters based on her request for the procedure, rather than her best interests, which might be informed by other, long-term needs.

Brané acknowledged, however, that ORR was in a “difficult situation” because “Catholic contracts are a big percentage of the beds that they use, of the spaces they have to care for the kids.” The organization faces “increasing pressure to get more space as numbers have gone up, and it’s tricky for them to potentially not have those contracts,” she said.

A spokeswoman from USCCB says the organization does not comment on pending litigation. Mark Weber, a spokesman from HHS, also said he could not comment on the suit, but noted that HHS partners with faith-based organizations because “they have years and years of demonstrated services in helping people in different situations, with infrastructures in place.”

“Anyone in this country is allowed to apply for a grant, and if your applications meet the grant requirements, the grantees are selected,” Weber says. “It’s a standard approach for many government programs.” He says that USCCB has provided residential services to HHS since 2003, and that so far this year, HHS’s current network “has provided safe and healthy environments that includes access to nutritious food, clean clothes, education and medical services.”

Chou, from the ACLU, says the ACLU isn’t trying to prevent USCCB from applying for grants or providing services in the future: “What we’re asking from the court is that all federal government grantees follow the law and provide all the necessary and required care that they’re supposed to. We understand freedom of religion is an important constitutional right, but religious liberty does not give you the right to impose your beliefs on a vulnerable population.”