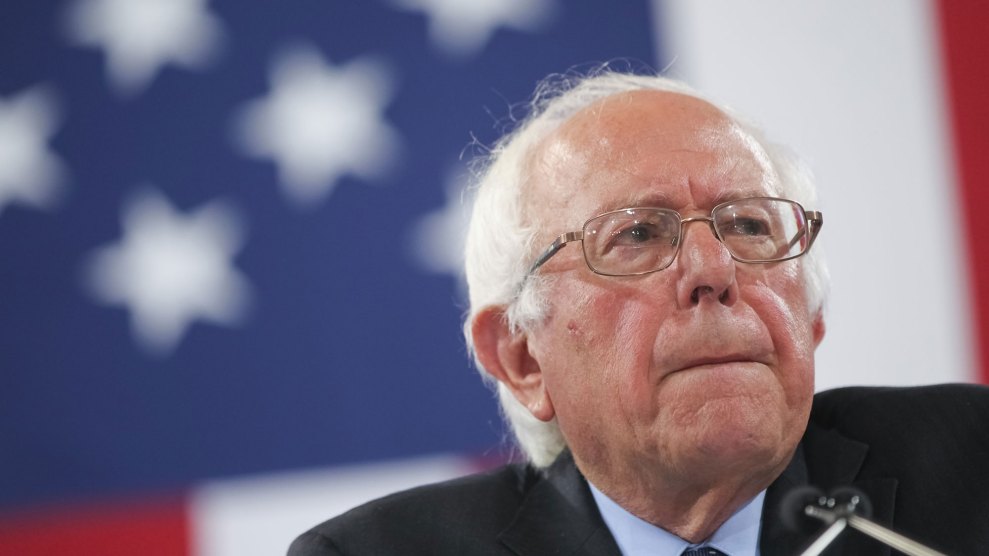 On Monday afternoon in a cavernous ballroom at the Philadelphia Convention Center, Bernie Sanders delivered a rousing speech to the nearly 1,900 delegates backing his late presidential bid. He hit all the thematic high points of his campaign: end big-money politics, restore the middle class, stop trade agreements, continue the revolution. And his supporters cheered wildly for their man. But when Sanders told them that they must now band together to defeat the “bigotry” of Donald Trump by electing Hillary Clinton, he was drowned out by a chorus of boos and anti-Clinton chants. Just hours before the official opening of the convention, Bernie Nation was not willing to follow Sanders’ lead on this key point.

Sanders spoke after speeches by some of his biggest backers, including rapper Killer Mike, former NAACP President Ben Jealous, and actress Rosario Dawson. When Dawson mentioned Clinton, the room broke into loud boos. Dawson told the crowd that Clinton “is not a leader, she is a follower.”

When he spoke, the senator from Vermont made the case that his presidential campaign had been a historic success and that it would continue to be a vehicle for political revolution. Volunteers handed out registration forms for Sanders supporters to hold organizing meetups in late August, to kick off a new step in this progressive crusade. Sanders received big cheers when he praised his supporters’ contributions to what he called “by far the most progressive platform ever written” and an ovation when he noted the departure of Democratic National Committee chair Debbie Wasserman Schultz, which he suggested might open up an opportunity for a more Bernie-friendly leadership in the party.

But when he tried to rally the delegates on behalf of Clinton, his audience became restless. “Immediately, right now, we have got to defeat Donald Trump, and we have got to elect Hillary Clinton and Tim Kaine,” Sanders said. His delegates shouted their protests and booed, forcing Sanders to pause before continuing in his remarks. Sanders called Trump a “bully and a demagogue” who “has made bigotry the core of his campaign.” Still, the boos continued. “She does too!” delegates shouted. Others yelled, “Only you! Only you!”

Sanders declared that Trump poses a danger to the country’s future, but he could not win over the crowd. “She has ruined communities!” one woman shouted. “She has ruined countries!” Sanders pointed out that Trump “does not respect the Constitution of the United States.” Delegates kept on chanting: “Not with her!” and “We want Bernie!”

Sanders did not confront the booing delegates directly. He did not use this opportunity to address their anger and disappointment. He looked a bit surprised by the intensity of the Clinton opposition. He moved ahead with his prepared speech. After he was done—and the crowd had chanted, “Thank you, Bernie!”—Mother Jones asked Sanders three times what he thought about his delegates fiercely booing Clinton. He did not respond and quickly left the ballroom.

Afterward, Sanders delegates and supporters discussed the widespread booing of Clinton and whether they could follow Sanders’ guidance. Several said they could not bring themselves to vote for her. “She’s no better than Trump,” said one delegate, who wouldn’t provide her name.

Angela Valdes, a 37-year-old small-business owner from Portland, Oregon, who is a Sanders representative on the convention’s credentials committee, said she was nowhere close to supporting Clinton. “It is all about honesty and integrity,” Valdes said. “She has to come clean first.” Come clean on what issues? “Oh,” she remarked, “there are too many to list.” But Valdes left open the possibility that Sanders might be able to persuade her to vote for Clinton by November.

Other delegates acknowledged that Sanders was right that Clinton must win at the end of the day but said that protests against her this week in Philadelphia were worthwhile. Such actions, Elizabeth Davis, a North Carolina delegate, said, would “keep it fresh” for Clinton that she needs Sanders’ supporters to win.

So how much will Sanders do to persuade his delegates to follow his advice? In this appearance, he didn’t go beyond his prepared remarks. And Aisha Dew, a whip for the North Carolina Sanders delegation, said she has not heard anything from the Sanders campaign regarding the actions delegates should take. Earlier in the day, at a Florida delegation breakfast, Sanders offered no instructions on how delegates might conduct themselves on the floor of the convention this week.

After Sanders departed the convention center, his campaign manager Jeff Weaver remained as delegates milled about and wondered what would be next for them at the convention. What about the booing of Clinton? he was asked. “Oh,” he said, with a tone of nonchalance, “people will come around.”