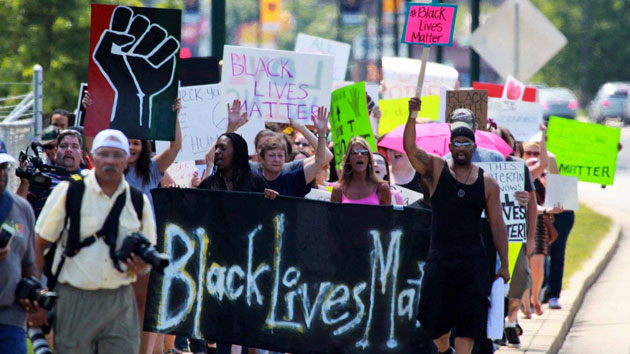 Against a backdrop of surveillance of the Black Lives Matters movement ahead of the Republican National Convention, two civil rights organizations are aiming to further expose government tracking of the movement’s members. On Tuesday, New York City-based groups Color of Change and the Center for Constitutional Rights filed a joint Freedom of Information Act request with the FBI and the Department of Homeland Security seeking documents, video and audio recordings, and other information on policies and protocols related to the surveillance of Black Lives Matter activists.

The request covers surveillance conducted in 11 cities that have seen large-scale protests over the police shooting or in-custody deaths of black people, including Baltimore, Chicago, New York City, Oakland, Cleveland, and St. Louis, where protests erupted in Ferguson after the killing of black teenager Michael Brown in August 2014. (The request cites Mother Jones‘ reports on the Department of Homeland Security tracking protesters at a Freddie Gray-related rally, and the monitoring of social media activity by prominent Black Lives Matter activists Deray McKesson and Johnetta Elzie by a private cyber security firm.)

The groups filed the request because they believe surveillance of Black Lives Matter is more systematic than is currently understood and jeopardizes the activists’ First Amendment rights, says Rashad Robinson, the director of Color of Change. “The government has done a real coordinated effort about what’s happening among activists, but nobody is monitoring what the government is doing,” Robinson says. “The more information we have, the better we can go about the kind of pushback and systemic change necessary to stop it.”

You can read the full FOIA request here.