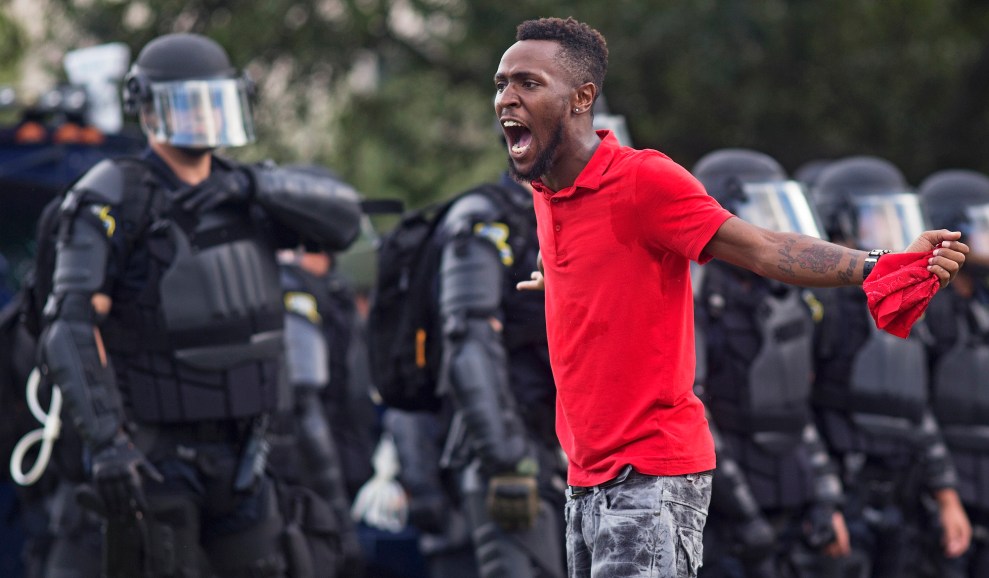 Hundreds of protesters and several journalists were arrested over the weekend during nationwide demonstrations against police violence in the wake of the shooting deaths of Alton Sterling and Philando Castile—two black men who were killed by the police last week, and whose last moments were caught on video. The videos, which quickly went viral, have sparked national outcry over police brutality and racism in the justice system.

Leading Black Lives Matter activist DeRay Mckesson was among those arrested on Saturday in Baton Rouge, Louisiana, where Sterling, a husband and father of five, was shot and killed outside a convenience store while selling CDs. Mckesson was released the following day and is being charged with simple obstruction of a highway of commerce. Since his release, he has criticized Baton Rouge police for provoking protesters and doing “everything in their power” to shift conversations away from police accountability.

Go to the 4:00 mark. #BatonRouge police tackle @deray and arrest him as he walks down the street with protestors. https://t.co/B1Kexq9Rhp

On Sunday, CBS’s David Begnaud reported that Baton Rouge police were seen breaking into a woman’s house where protesters had taken refuge. The tense scene is captured below:

Baton Rouge police in gas masks & riot gear telling protesters they will be arrested shortly for standing in street pic.twitter.com/m0ZyKy47br

this is currently going on in baton rouge, this is terrifying. #BatonRouge #BlackLivesMatter #AltonSterling pic.twitter.com/sYvrQzSteW

Another woman in Rochester, New York, was filmed getting arrested while talking to reporters about why she decided to participate in the protests.

Doing an interview and suddenly she is arrests @TWCNewsROC pic.twitter.com/EjWSoDNSTD

In St. Paul, Minnesota, where Castile was killed in front of his wife and young child during a traffic stop, police reportedly used smoke bombs to clear protesters who were blocking a major highway on Sunday. NBC reports 21 officers were injured in the process.

Some on the right have slammed Black Lives Matter activists and their protests for fueling animosity toward law enforcement officials, blaming the movement for the death of five police officers by a gunman in Dallas last Thursday.