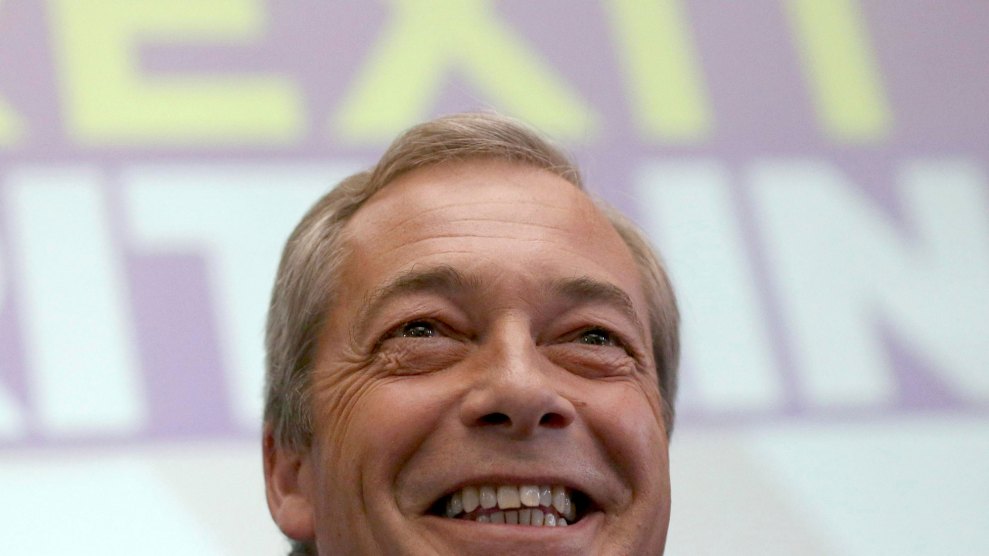 One of the most important conservative politicians in Cleveland this week isn’t even a Republican. It’s Nigel Farage, the former leader of the UK Independence Party who led the successful push for Britain’s exit from the European Union. Farage was invited to Cleveland by the Republican National Committee and was in the arena on Tuesday night. On Wednesday morning, he held court for a Brexit, er, breakfast gathering of reporters and delegates and offered his take on Trump.

The comparisons between Trump’s nativist populism and the Brexit campaign’s anti-immigration nationalism have been inescapable since last month’s referendum, but Farage said he had “reservations” about the Republican nominee. “What Trump gets right, it seems to me, is he talks about some of the issues that perhaps others find a bit awkward or uncomfortable, they’d rather brush them under the carpet,” he said. “And Trump’s talked about those things, and that’s generated a huge level of interest. My reservations were—I’ve been told I’m a bit over the top once or twice, but I think some of Trump’s comments are a bit out there.”

For instance, he said, the Muslim ban wouldn’t cut it. “You know, to say that we would ban all Muslims from coming to America—apart from being false, given that there are quite a few citizens working overseas or they’re serving in the US Army overseas and they’re Muslim—I can see what he’s trying to do,” Farage said. “He’s trying to get some big messages out there, some big wedge issues. He’s trying to reach voters who feel frustrated and perhaps a little scared. I get what he’s doing, but just the style of it makes me wince a little bit.”

Farage was, like a lot of conservatives in Cleveland this week, favorably inclined but not entirely sold on Trump. But he was adamantly opposed to Hillary Clinton, the presumptive Democratic nominee, lamenting what he called “this sense of entitlement, as if this country now has its own hereditary principle.” He added, “Might as well introduce the House of Lords to Washington.” He stopped short, however, of endorsing Trump outright and swore off campaigning for any conservative politicians in the United States. He appeared to be taken aback by the size and fervor of the crowd inside Quicken Loans Arena.

“The American style of politics, the way they express themselves at this convention—and I’m sure it’ll be some of the same next week—is completely different,” he said. “There are no direct parallels to how we do things in the United Kingdom. Yeah, ‘lock her up!’—quite strong stuff, isn’t it?”

Farage is not speaking at the convention, but he is making the rounds at satellite events around town. He isn’t the only notorious European politician who’s come to bask in the orange glow of Trump. Dutch politician Geert Wilders, whose anti-Muslim rhetoric in some ways presaged Trump’s Muslim ban, headlined a “Gays for Trump” event at a club on Tuesday night.