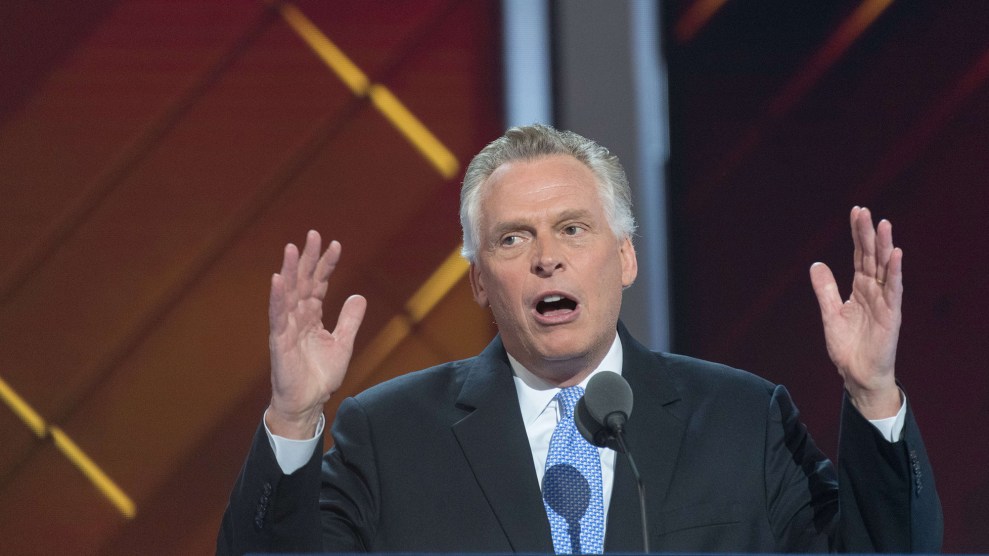 Hillary Clinton’s campaign is anxiously trying to reassure Bernie Sanders’ supporters that she opposes the Trans-Pacific Partnership trade deal, despite what one of her closest allies might be telling the press.

On Tuesday night, Virginia governor and longtime Clinton pal Terry McAuliffe did what he does best, sticking his foot in his mouth in an interview right after his speech to the Democratic National Convention. McAuliffe told Politico that he expects Clinton to come around on the TPP once she’s in office. “Listen, she was in support of it,” he said. “There were specific things in it she wants fixed.” He followed up on MSNBC on Wednesday, noting that while Clinton would like to see parts of the deal changed, he still expects her to sign it eventually.

The Clinton team did its best to refute McAuliffe, reiterating that Clinton is firmly opposed to the trade deal. “I can be definitive,” campaign chairman John Podesta told reporters at a press conference Wednesday morning. “She is against it before the election and after the election.” The AFL-CIO quickly latched onto that message as well on Tuesday night, blasting out a statement from the organization’s president, Richard Trumka, saying “Terry McAullife is absolutely wrong. He should listen more closely to our candidate, just as Hillary has listened closely to America’s workers.”

Clinton supported the trade deal in principle when she was a member of President Barack Obama’s cabinet but has shifted to vocal opposition during her presidential campaign. Opposing the TPP has become a central cause for Sanders fans, with “No TPP” signs widespread inside the DNC hall this week. (It was one of the few party platform fights the Sanders camp lost, though that was at the behest of Obama rather than Clinton.) It’s the rare place where the Sanders crowd finds itself aligned with Donald Trump, who has regularly assailed the TPP and other free trade deals during his presidential campaign. “We all know it is gonna happen if she won,” Trump warned during a press conference Wednesday, playing off McAuliffe’s comments. It was enough of a concern for the Clinton campaign that immediately after selecting Sen. Tim Kaine of Virginia as Clinton’s running mate, the campaign told the media that Kaine, who had previously hedged on the TPP, was now firmly opposed to the deal.