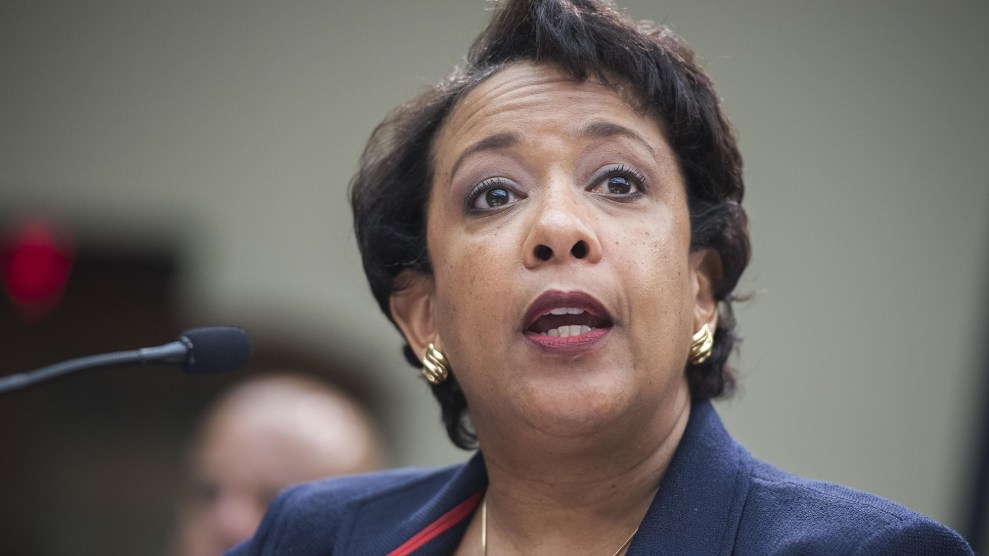 Attorney General Loretta Lynch frustrated House Republicans Tuesday when she repeatedly said that when it came to the decision about prosecuting Hillary Clinton over her mishandling of classified information on a private email server, she deferred to the FBI and career Justice Department prosecutors and wouldn’t share her own opinion on whether Clinton broke the law.

Lynch’s testimony before the House Judiciary Committee comes a day after House Republicans formally asked the Department of Justice and the FBI to investigate whether Clinton had lied to Congress last fall when she said she did not have classified information on her server. Last week, FBI Director James Comey testified before the House Oversight Committee about his recommendation to the DOJ to not prosecute Clinton in the matter.

House Republicans asked Lynch if she thought Clinton had broken the law when she set up a private home email system and passed classified information through it during her tenure as secretary of state. Instead, the attorney general repeatedly said her role was to take advice from the career prosecutors and the FBI before making a decision about pursuing charges. Rep. Dave Trott (R-Mich.), said his staff counted more than 70 times during Tuesday’s hearing that Lynch said she couldn’t answer or avoided a direct response to questions.

“Your refusal to answer questions regarding one of the most important investigations of someone who seeks to serve in the highest office in this land is an abdication of your responsibility,” Judiciary Committee Chairman Bob Goodlatte (R-Va.) said about halfway through the hearing. “This is a very important issue of whether or not the Justice Department is going to uphold the rule of law in this country, and I hope that with the questions that will be forthcoming now, you will be more forthcoming with answers.”

Rep. Trent Franks (R-Ariz.) asked just one question before giving up, noting that other members of the committee “have summarily failed, as I just did, to get you to answer even the most reasonable and relevant question.”

The tone of the dynamic between Lynch and the Republicans was captured during questioning from Rep. Doug Collins (R-Ga.). He said he missed former Attorney General Eric Holder because “at least when he came here he gave us answers.” Then Collins tried to get Lynch to discuss speeding violations:

At the end of the hearing, Lynch said the DOJ had “provided unprecedented access into the thinking of the investigative team in this case. I have provided access into the process by which the department was resolving this matter, things we rarely do.”

Republicans repeatedly brought up Lynch’s June 27 meeting with former President Bill Clinton at a Phoenix, Arizona, airport that occurred just days before the FBI announced its findings and the DOJ formally moved to close the case. Lynch said the meeting led her to state publicly that she’d act on the FBI recommendations regardless of what they were, something she says she was already planning to do.

Lynch said Tuesday that she “felt [it] was important to do in order to make it clear to the American people that my role in this matter had been decided before I had a conversation with the former president, the conversation did not have any impact on it, and, in fact, as with every case, the team of experienced prosecutors and investigators who reviewed this diligently, thoroughly, and at great length had gone to great lengths and come up with a thorough, concise, and exhaustive recommendation, which I then accepted.”

Lynch compared the frustration of those who wanted charges against Clinton to the “frustration of people who may have a situation where they’re the victim of a crime and they’re not able to bring a case,” but she said it does not change the facts of Clinton’s case that the FBI and DOJ prosecutors determined didn’t merit criminal charges.

Democrats focused their time asking Lynch about gun violence, police killings of African Americans, the government’s surveillance of Black Lives Matter activists, immigration, and prisoner transport problems. But several also blasted their Republican colleagues’ use of the hearing to continue to talk about Clinton’s emails.

“Rome is burning, there’s blood on the street of many American cities, and we are beating this email horse to death,” said Rep. Cedric Richmond (D-La.), before he asked a series of questions about police killings of African Americans and asked for an investigation into the Baton Rouge Police Department.

Rep. John Ratcliffe (R-Texas) said he would pose a series of questions about how the decision not to prosecute was made when Comey appears before the House Homeland Security Committee next week.