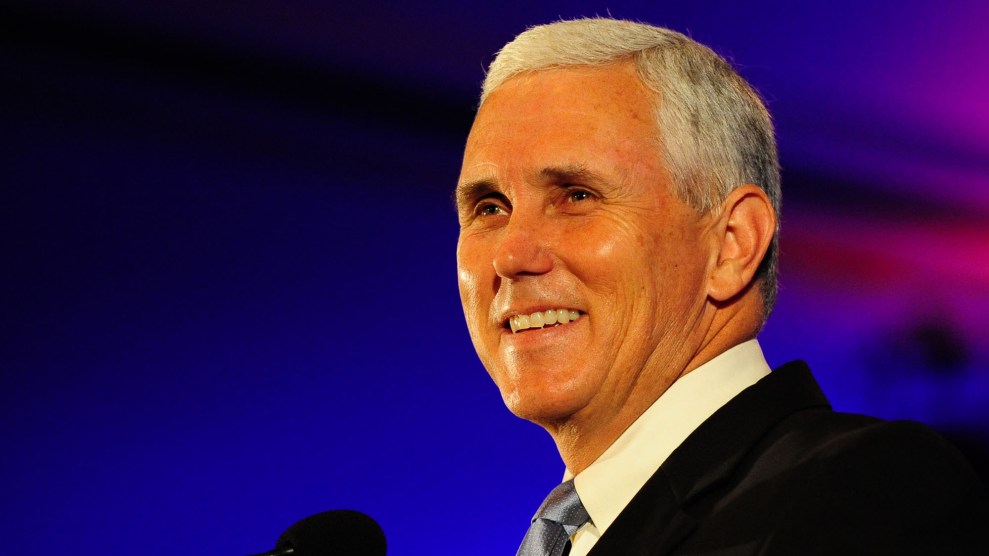 The guessing game concerning Donald Trump’s vice presidential pick entered a new round this morning, as the presumptive Republican nominee, his adult children, and campaign manager Paul Manafort visited the home of Indiana Gov. Mike Pence. Pence is one of the few potential Trump running mates who has not publicly turned down the job, and he would bring social conservative cred to Trump’s White House bid.

As the Washington Post reported earlier this week, Pence has held a radically different position from Trump on a central issue in the campaign, because Pence is a major advocate for free-trade deals, which Trump has railed against, calling for higher tariffs on trading partners and penalties for companies that move jobs overseas. The Post noted that Pence has backed the Central American Free Trade Agreement (CAFTA) and the Trans-Pacific Partnership, two of Trump’s top targets.

But as a congressman who consistently voted for free trade agreements, Pence offered a full-throated endorsement of the North American Free Trade Agreement, another one of Trump’s targets. Trump has decried NAFTA as a “disaster” that has allowed other countries to defraud the United States. Yet Pence praised the deal in 2001 and insisted that NAFTA had brought hundreds of millions of dollars to his home state of Indiana. He claimed that under NAFTA, “the volume of US corn exports to Mexico has nearly tripled since 1994.”

In 2005, Pence urged his House colleagues in Congress to pass the CAFTA, arguing that “a dream of democracy” was at stake with the vote. “Let us not in this Congress and in this nation turn our backs today on those same fledgling democracies that are embracing our principles of free-market economics and freedom,” Pence said.

Can Trump pick a running mate who holds the exact opposite policy on one of Trump’s signature issues? Who embraces the “rigged system” that Trump holds responsible for undermining American greatness? The world will know soon.