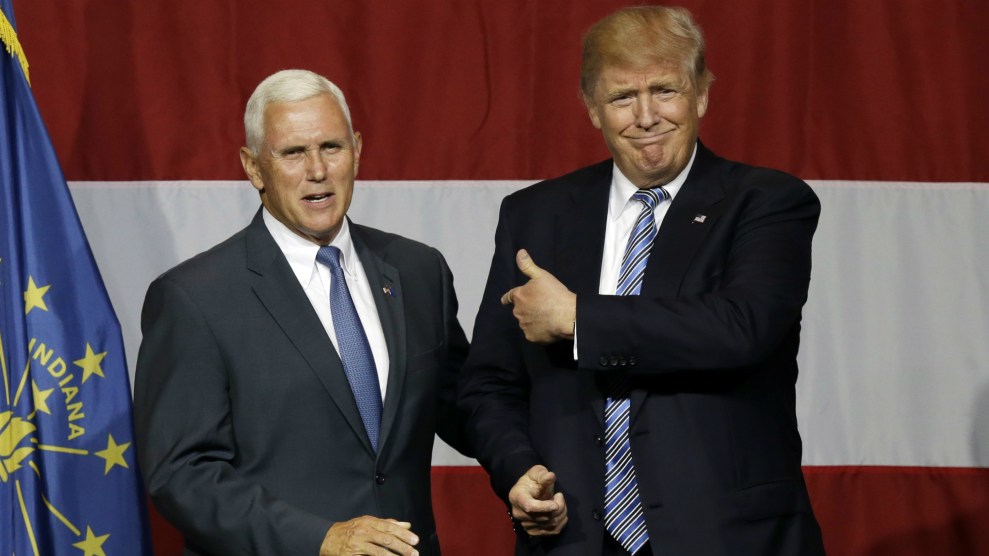 Indiana Gov. Mike Pence, known for his staid manner and his short-sleeved-shirt-and-tie combinations, might have been chosen as a steady counterweight to Trump’s flamboyant provocative style. But when it comes to adding weight to the Trump campaign’s wobbling fundraising operation, he might have been the worst pick Trump could have made. Newt Gingrich, for instance, has a devoted backer in Las Vegas billionaire Sheldon Adelson, the single biggest source of cash for Mitt Romney’s efforts in 2012 who has yet to commit significantly to Trump’s operation. And New Jersey Gov. Chris Christie is known to have been a darling of some of Wall Street’s biggest names.

But Pence? He isn’t exactly a star with the party’s regular fundraisers and donors—the people who have always been the backbone of GOP financial support. It’s true that Pence has ties to both the political empire of the conservative billionaire Koch brothers and some tea party grassroots organizations. But if Trump thought he could tap into those connections to fuel his presidential campaign, he might have been mistaken.

Over the course of his career, Pence’s biggest source of campaign cash has been the Republican Governors Association, which has put more than $2.6 million into supporting his gubernatorial aspirations. The RGA’s main job is to funnel money from wealthy Republicans nationwide into potentially pivotal governor’s races, and much of the organization’s success in doing that hinges on the connections and interests of the RGA’s executive director. In 2012, the director was a party operative named Phil Cox, who went on to become a close Christie ally, running the presidential super-PAC that raised more than $20 million this year. If Cox stays with Trump, it won’t be because of Pence. (Christie’s relationship with Trump, meanwhile, may be going through a rocky stretch.)

Pence did spend 12 years in Congress, but he never really made his mark as a fundraiser there. His largest source of support, according to the campaign finance tracker OpenSecrets.org, were donations fundraised on his behalf by the Club for Growth, the tea-party-aligned group that relies heavily on its expansive grassroots fundraising operation. It’s an organization that has devoted a great deal of time and energy this election to trying to destroy Donald Trump. Almost immediately after kicking off his presidential campaign, Trump picked a fight with the group, accusing it of trying to extort him for $1 million. That’s a rift that all of Pence’s past goodwill with the group probably won’t be able to overcome.

If Trump can’t rely on Pence to hook him up with any fundraising networks, perhaps he can call on some of Pence’s sugar-daddy donors? Notably, Pence has had two billionaires backing his political aspirations, Indiana businessman Dean White and industrialist David Koch, but neither looks promising for Trump.

Koch personally contributed $300,000 to Pence’s war chest, a much more direct investment in a candidate than he usually makes. (David and his brother Charles are known to be major backers of dark-money groups that operate independent of any candidate, and their direct contributions to candidates are generally not so large.) But if part of the Trump campaign’s calculation in picking Pence is that he could rope in the Kochs, it’s probably not going to happen. Both brothers have expressed serious doubts about Trump, and almost immediately after word leaked that Pence was the choice, the Koch organization threw cold water on the idea that the move would endear them to Trump.

White, who is not a household name like Koch, is actually the individual who has done more for Pence’s political career than anyone else, according to campaign finance filings. White has shoveled at least $775,000 into Pence’s two bids for governor of Indiana, including $350,000 already this year. Those numbers, while eye-popping for the average American, are actually not that extraordinary for White, who has given hundreds of thousands of dollars in recent years to various Republican candidates in Indiana.

But despite being worth more than $2.3 billion, White is not a major player on the presidential level. The one noteworthy donation he’s made when it comes to presidential politics is a $1 million contribution in 2012 to Karl Rove’s American Crossroads super-PAC, which backed Romney. Rove’s animosity toward Trump and the fact that White also gave directly to Romney (who has spoken out against Trump) suggest that White will not automatically transfer his allegiances, or his deep pockets, to Trump.