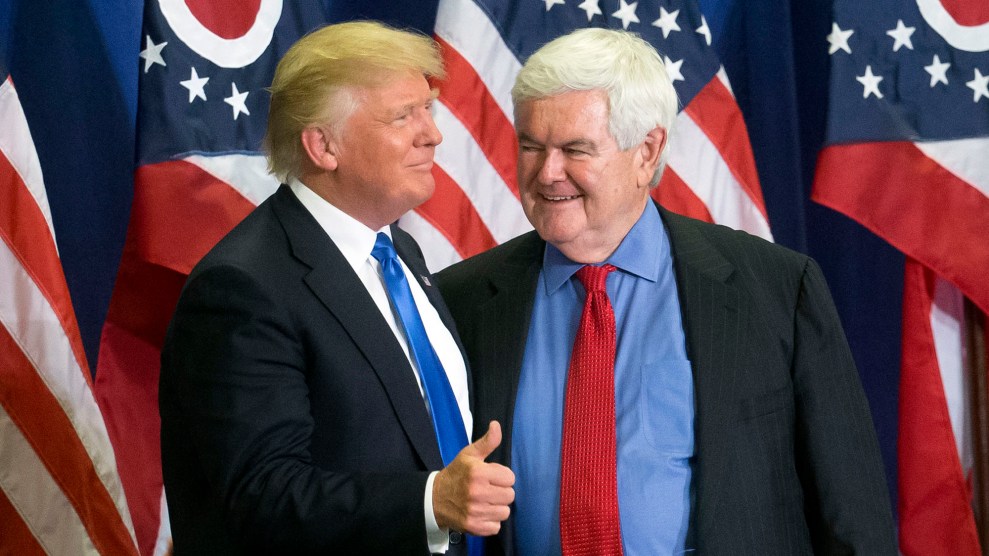 Newt Gingrich, a leading candidate to be Donald Trump’s running mate, told Republicans at a closed-door meeting earlier this year that Trump is not a conservative, speaks to voters “at the lowest level of any candidate in either party,” and could lose in a landslide if he didn’t significantly change his approach to campaigning.

Gingrich suggested Trump’s move from campaigning to governing would be challenging: “How we make the transition from, you know, language for fourth graders to real policy, I don’t know.”

His comments came in a February speech in Washington to the Republican State Leadership Committee, months before he began angling to become Trump’s vice presidential choice.

Gingrich’s remarks, captured on a previously undisclosed recording of the speech reviewed by ProPublica, mixed admiration for Trump’s success in the primaries and skepticism about whether he could prevail in a general election.

“How we make the transition from, you know, language for fourth graders to real policy, I don’t know.”

“This is not a guy who’s shallow or simple, but he is a guy who knows an immense amount about marketing, which is why he talks at a fourth-grade level. He talks at the lowest level of any candidate in either party, not because he’s stupid,” Gingrich said told the crowd of executive-level political staffers and corporate sponsors. “He does it because he knows if you talk at a fourth-grade level everybody can understand you.”

Gingrich remained neutral in the GOP primary until May, when he endorsed Trump and said he wouldn’t rule out joining the ticket. He met Wednesday with Trump in Indiana and according to CNN was seen leaving a hotel in the same motorcade as Trump’s children.

In the February speech, Gingrich said he had no idea what kind of president Trump might be. “I do not believe anybody including Trump can tell you what a Trump presidency would be like,” Gingrich said.

The recording of the speech was made available to ProPublica by the Center for Media and Democracy, a Madison, Wisconsin, group with the stated goal of exposing corporate influences on politics. The group said it obtained the recording from someone who attended the meeting.

Gingrich, a former Georgia congressman, became Speaker of the House in 1995 after leading a Republican wave that captured the chamber from the Democrats in the midterm elections during the administration of Bill Clinton. He left Congress in 1999 and made an unsuccessful bid for the Republican presidential nomination in 2012.

Gingrich spoke for just over half an hour to the Republican group’s Feb. 29 meeting in Washington, devoting about 10 minutes to Trump. His comments were a mix of pointed criticism and awe at Trump’s political skills. He likened Trump’s approach to “some weird combination of the Kardashians” soliciting hearty laughs from the audience. “I mean think about it, the whole tweeting, the whole continuous noise.”

Throughout much of the talk, Gingrich praised Trump’s prowess as a politician and negotiator, noting his success on TV, in real estate development and other ventures. He called him a change agent who effectively guts his political rivals: “He’s the grizzly bear in the room. He’s not normal.”

At one point, Gingrich suggested he was shocked to hear of a highly educated supporter of Trump’s. “I had a very sophisticated medical doctor in Des Moines write me two days ago and say he sent a thousand dollar check to Trump. And I wrote back and said what are you doing?” Gingrich said to laughs. “He said I have finally concluded that we have to kick over the table in Washington.”

Gingrich also agreed with what many Republicans during the primary process feared: “National Review’s right. Donald Trump’s not a conservative.” Instead, Gingrich characterized him as “an American nationalist” who uses a deliberately unpredictable mix of hostility against “stupidity,” liberals and political correctness.

(Click below to watch a video of the speech’s transcript. The video has no sound.)

Gingrich and the Trump campaign did not immediately respond to requests for comment Wednesday evening.

In the speech, Gingrich said Trump “has found a formula which is worthy of study. I operate on the premise that when people are doing something really smart, even if I don’t like it or I don’t understand it, it’s my job to figure them out, not their job to figure me out.”

Still, Gingrich suggested Trump would lose big if he didn’t change his style in the general election campaign to follow Ronald Reagan rather than Barry Goldwater. Reagan in his successful 1980 campaign united Republicans around a compelling message of optimism, while Goldwater’s 1964 campaign failed when many voters perceived him as a candidate of the extreme right. Gingrich said he thought Trump would make this pivot.

“If he and his team understand this,” Gingrich said, “I suspect they will evolve rapidly.”