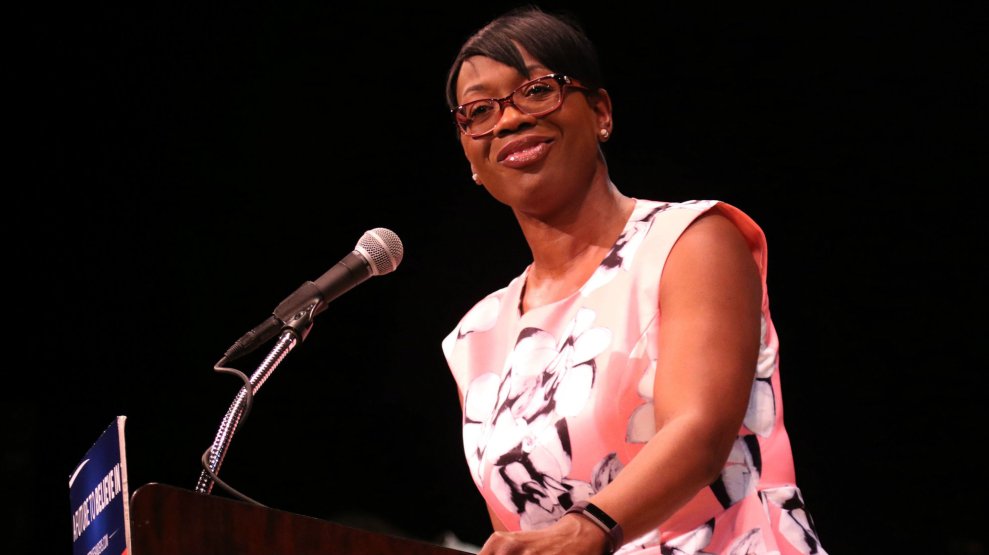 In an exclusive interview with Mother Jones, Nina Turner, a prominent Bernie Sanders delegate and surrogate, explained why she was at the center of the latest storm at the Democratic convention.

For the past day, Sanders delegates have been complaining that Turner, a former Ohio state senator, was somehow dissed by the Hillary Clinton campaign. At first, the talk was that her credentials were revoked and that she was booted out of the proceedings. Throughout Wednesday, Sanders delegates trotted about Philadelphia holding “I’m with Nina” signs. It was unclear what had transpired. But many Sanders delegates cited this episode as yet another indication that the Democratic establishment was trying to smother the Sanders revolution.

At an early evening press conference at the Wells Fargo Center, champions of Turner gathered to express their support for her and display their anger with the Clinton campaign. This group included actors Danny Glover, Susan Sarandon, and Rosario Dawson. They repeatedly asserted that the Clinton camp had insulted Turner and that this was yet another slight of the entire Sanders movement. Once again, they declared, the Clinton crowd was dismissing the Sanders wing and not doing what they could to achieve unity. There was much anger and passion, as these Turner supporters pointed to the Turner business as symbolic of the Democratic elite’s effort to stifle the progressives.

Reporters asked over and over for details of what had actually happened with Turner, and her high-profile allies declined to provide any specifics. They continued to assert that Turner was disrespected and that was a blow to all the Sanders delegates.

As the press conference was winding down, Turner showed up. She was immediately mobbed by delegates and reporters. Initially, she only spoke to thank her supporters for their backing and talked about how the Clinton campaign had to demonstrate its willingness to accept more of the progressive agenda. Eventually, security guards appeared to escort her out of the public space in the media tent. As she walked away, she did speak to Mother Jones.

Turner said that prior to Tuesday she had been asked by Sanders to be part of the nominating and seconding speeches for Sanders before the roll-call vote on Tuesday. “I was told it was going to be me and Tulsi,” she said, referring to Rep. Tulsi Gabbard (D-Hawaii), another top Sanders supporter. But when she arrived at the convention on Tuesday afternoon, she saw that nobody from the Democratic Party was there to greet her or help her prepare for her appearance. She then heard from Sanders: The Clinton campaign did not want her on the stage.

Why? “No reason was given,” Turner said. Was it because she might not have been willing to endorse Clinton? Again, she said, “No reason was given.” She said she still doesn’t know exactly what happened. She noted that she had not submitted any prepared text to the convention managers and had not spoken to them about her remarks. She said she had arrived with the expectation she would be on the stage to nominate Sanders or second his nomination.

What about Sanders? Did he resist or push back against the Clinton campaign on her behalf? “Sen. Sanders is in a difficult position,” she said. “I don’t know. I don’t want to say.”

What happens next? At the press conference, her supporters demanded that somehow the Clinton campaign had to remedy the situation and find a way to honor Turner. When Turner was asked this, she said, “I don’t know. I am still trying to figure out all that happened.”

Update, July 27, 10:00 p.m. ET: Michael Briggs, Sanders’ communications director, told Mother Jones in a statement: “The senator wanted Senator Turner to second his nomination and was disappointed that it didn’t happen. She has been one of Bernie’s strongest supporters.”