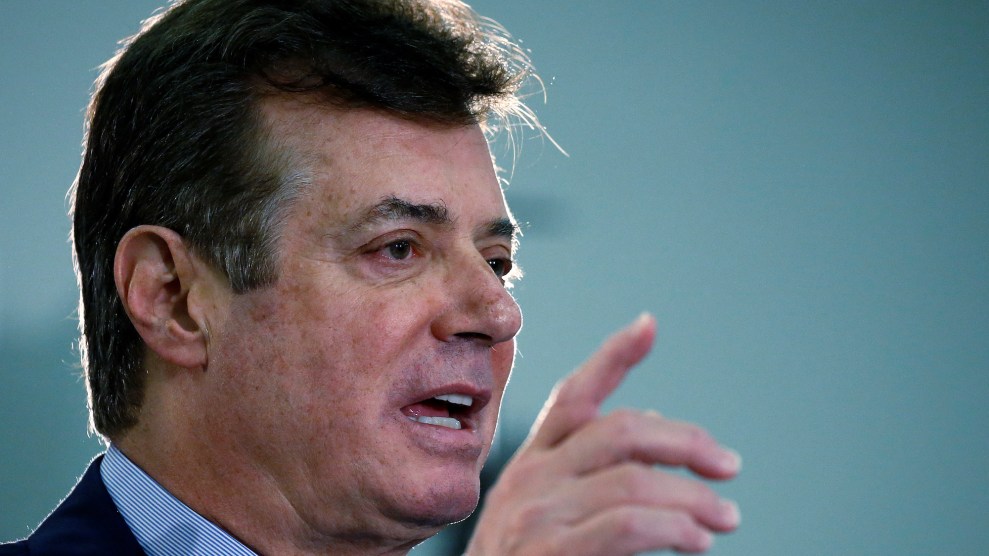 The news coverage of the third night of Donald Trump’s GOP convention was marked—predictably and perhaps justifiably—by the chorus of boos that descended upon Sen. Ted Cruz when he spoke from the stage and defiantly refused to endorse the celebrity mogul who cleaned his clock (and insulted his wife and father) during the primary campaign. But when it comes to policy substance—on which Trumpalooza has been light—the most important moment of the evening was when the New York Times released an interview it had conducted with Trump on national security matters.

In the interview, the Republican nominee voiced ideas that ran contrary to mainstream GOP foreign policy and undermined the acceptance speech delivered that same night by Indiana Gov. Mike Pence, Trump’s anointed running mate. Trump’s remarks were so potentially damaging to his campaign that when I asked Paul Manafort, Trump’s campaign manager, about the interview, he falsely claimed that the Times reporters—David Sanger and Maggie Haberman—had made up the damning quotes. Trump’s majordomo was trying to BS his way through another Trump controversy.

Here’s what happened. When Pence was on the stage, he offered the standard GOP attack on Democratic foreign policy:

Seven and a half years of Barack Obama and Hillary Clinton’s policies have weakened America’s place in the world. Terrorist attacks at home and abroad, grim and heartbreaking scenes from France just a few short days ago, and the attempted coup in Turkey all attest to a world spinning apart. History teaches us that weakness arouses evil. Hillary Clinton and Barack Obama’s foreign policy of leading from behind, moving red lines, feigning resets with Russia, and the rise, rule and reign of ISIS are a testament to this truth of history. We cannot have four more years apologizing to our enemies and abandoning our friends.

Pence was tossing off the usual slogans Republicans use to attack the Obama administration: leading from behind, abandoning friends, going easy on Russia.

Yet as Pence was speaking, the Times interview with Trump was circulating online and causing an immediate stir. The headline told a different story: “Donald Trump Plays Down Role of U.S. in Global Crises Like Turkey’s.” Sanger and Haberman reported:

During a 45-minute conversation, Mr. Trump re-emphasized the hard-line nationalist approach that has marked his improbable candidacy, describing how he would force allies to shoulder defense costs that the United States has borne for decades, cancel longstanding treaties he views as unfavorable, and redefine what it means to be a partner of the United States.

The article noted that Trump, if elected, would seriously consider tearing up existing agreements and trade pacts with US allies:

He said the rest of the world would learn to adjust to his approach. “I would prefer to be able to continue” existing agreements, he said, but only if allies stopped taking advantage of what he called an era of American largess that was no longer affordable.

Trump, the newspaper reported, “even called into question whether, as president, he would automatically extend the security guarantees that give the 28 members of NATO the assurance that the full force of the United States military has their back.” The report continued:

For example, asked about Russia’s threatening activities that have unnerved the small Baltic States that are the most recent entrants into NATO, Mr. Trump said that if Russia attacked them, he would decide whether to come to their aid only after reviewing whether those nations “have fulfilled their obligations to us.”

This would be a radical shift in US policy. Trump was questioning the centerpiece of the NATO alliance. He also was arguably conveying to Russia that he might accept aggression from Moscow. He went on to say he was no fan of the forward deployment of US troops in other parts of the globe. And asked what he would do to encourage Turkey to play a more active role in the fight against ISIS, he replied, “Meetings.”

This was an interview to upset the national security crowd—and American allies around the world. Just as Pence was blasting Obama and Clinton for supposedly abandoning US friends overseas, Trump was threatening to squeeze them and cut them off. Suggesting he wouldn’t honor NATO’s basic premise would definitely freak out Republican and Democratic foreign policy wonks and the leaders of US allies. Though the news media tend to focus more on political drama, this significant interview posed a risk to the campaign.

So Manafort had to do something—and that was to accuse the Times of falsifying its account.

Almost an hour after the convention was over, I was in a hallway off the main floor. A scrum of reporters was heading toward me. At the center of the pack was Manafort. One journalist after another was asking him about the Cruz speech and the jeering. I joined the crowd of interrogators and grilled Manafort on a different topic:

What about the New York Times interview in which Donald Trump says he may not defend NATO allies and may rip up agreements with allies?

That’s not what he said.

That’s what he’s quoted in the Times.

Those are direct quotes. You’re saying the Times got it wrong?

I am saying the Times got it wrong.

Maybe they have a tape recording of the interview.

I don’t know what they have. But Mr Trump’s position on NATO is very clear. He has said that he wants to bring NATO together and modernize it and get them to work together and carry their own fair share.

Hours later, the Times posted a transcript of the interview. No surprise: It backed up the newspaper’s account. In fact, during the exchange in which Trump said he might not protect an ally, he asked if the reporters were recording his responses:

TRUMP: If we cannot be properly reimbursed for the tremendous cost of our military protecting other countries, and in many cases the countries I’m talking about are extremely rich. Then if we cannot make a deal, which I believe we will be able to, and which I would prefer being able to, but if we cannot make a deal, I would like you to say, I would prefer being able to, some people, the one thing they took out of your last story, you know, some people, the fools and the haters, they said, “Oh, Trump doesn’t want to protect you.” I would prefer that we be able to continue, but if we are not going to be reasonably reimbursed for the tremendous cost of protecting these massive nations with tremendous wealth—you have the tape going on?

HABERMAN: We both do.

TRUMP: With massive wealth. Massive wealth. We’re talking about countries that are doing very well. Then yes, I would be absolutely prepared to tell those countries, “Congratulations, you will be defending yourself.”

Later on, Trump did indeed say he would not automatically defend NATO allies who in his view had not fulfilled “their obligations to us.”

Manafort, who for decades has been an adviser to warlords and autocratic thugs overseas, including a Ukrainian leader allied with Russian leader Vladimir Putin, had been spinning furiously; some might call it lying. He probably had not even had time to read the full story and discuss it with Trump. Yet he went straight into denial mode, claiming the Times had misquoted his candidate. But it hadn’t. (Manafort later tried this stunt with other reporters.) Trump had laid out a foreign policy posture that could set off problems at home and abroad, and Manafort’s response was to say up was down.

During the interview with the Times, Trump said, “I hope you treat me fairly. And I hope you say that I do know my subject. And I do know it. I know it better than, I know it better than the people that do it for—.” And he added, “I don’t get love from the media. Instead of reporting like it is.” Yet in this case the Times was certainly fair and accurate, reporting like it is. Manafort maligned the paper because it had presented the truth, and he was not willing to handle this truth.