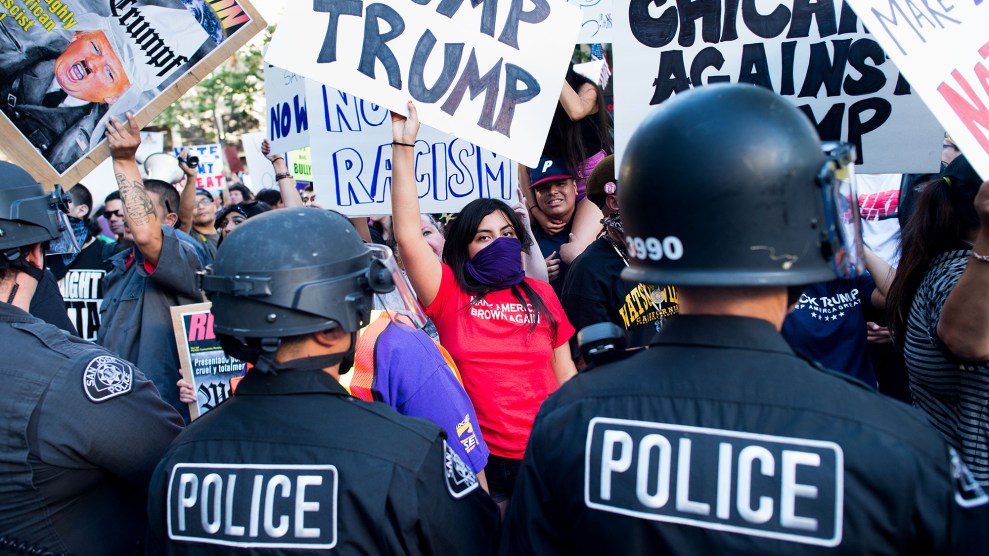 As the Republican convention in Cleveland approaches, several delegates from Pennsylvania who support Donald Trump say they are planning on bringing their guns with them to the GOP gathering. Why? They say they are worried about possible violent protest and even an attack from ISIS.

James Klein, a pro-Trump delegate from the Harrisburg area, notes that guns won’t be needed inside the convention hall and that delegates won’t be allowed to bring in weapons. “But,” he adds, “there’s the hotels. There’s going to be dinners.”

So Klein, an insurance executive and economist, has decided to come armed to Cleveland, and he has urged his fellow delegates to do the same. “We’re talking about ISIS,” he remarks, citing the recent shooting in Orlando and the bombings at the Istanbul airport. Referring to protesters outside Trump rallies, he adds, “We’re talking about people who have shown a propensity for violence.”

“There are a whole bunch of things happening: You go to various events, receptions, whatever, outside the convention hall,” says Ash Khare, a delegate from the northwest corner of the state who applied for a concealed carry permit in preparation for Cleveland. “And you walk on the streets and, you know, people know that you are a delegate, and who knows what the crazy people are going to do? So you’ve got to be vigilant about what’s going on and prepare yourself.”

Marc Scaringi, another Trump delegate from the Harrisburg area, says that during the past few weeks there have been many emails exchanged among the Pennsylvania delegates discussing whether to bring weapons to Cleveland.

A lifelong member of the NRA who carries a gun every day, Klein notes he is particularly concerned about the threat of international terrorism. “I’m not a terrorist, okay, but I’m an academic and a theorist, and I would think that if I were an ISIS guy that I might want to attack the Republican National Convention,” he says.

Klein continues: “People will attack you at your weakest, at your softest.” That is, he explains, attacks are not likely to occur at the convention hall but elsewhere in the city where police and Secret Service officers are unlikely to stop an attack.

Khare expects to receive his concealed carry permit in a few days. Then he plans to obtain training from the local sheriff’s department before buying a gun. But he stresses that having a concealed carry weapon is not about stirring up trouble: “You gotta have a proper mindset and the proper training. You don’t go out to act like a warrior…This is just in case you get into a situation where you can make a difference.”

Scaringi hasn’t yet decided if he will bring his gun, citing logistical concerns about where to store it. “If you can’t have the firearm in the convention, then you really can’t take it, because what do you do with it?” he says. “I don’t think there’s going to be any firearms locker room. That’s really the only thing preventing me from saying, ‘Yeah, I’m going to go ahead and carry.'”

Scaringi also points to the violence that occurred at a Trump event in San Jose, California, in early June. Anti-Trump protesters punched the candidate’s supporters, jumped on cars, and threw eggs at a female Trump supporter. “I think this is going to be the most riotous political convention since 1968, and maybe even more so,” he predicts. “In addition to just your average political protester, you’re going to get serious people here who want to do harm and want to create mayhem.”