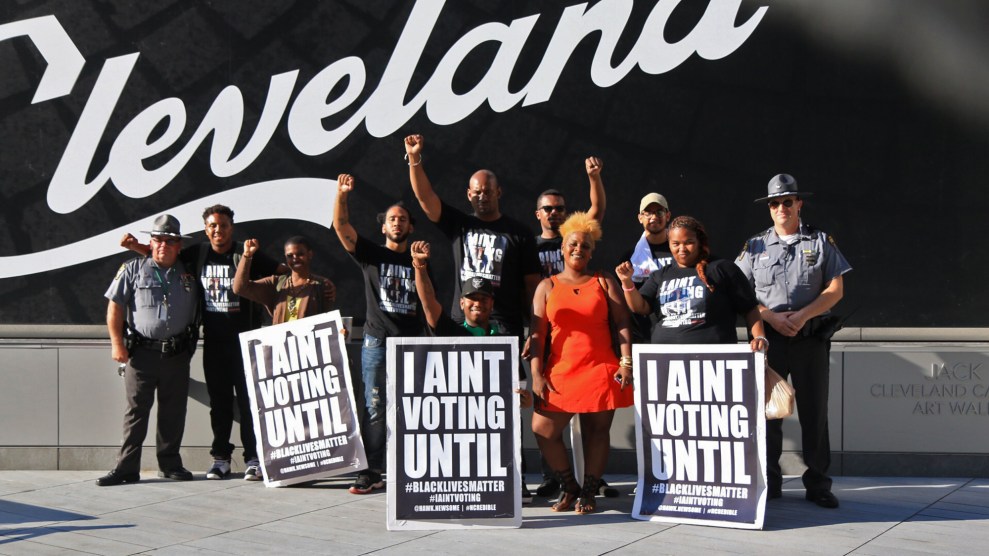 In the blazing sun of Cleveland Public Square, under the 125-foot-tall Civil War Soldiers’ and Sailors’ monument, an awesome thing just happened—something that defies some peoples’ expectations of what would take place at the Republican National Convention.

Two Ohio cops accepted an invitation to briefly join a group Black Lives Matter protesters—mainly from New York City—in front of a big black-and-white “Cleveland” sign. They stood and posed for photos. The protesters laughed, then raised their fists. The cops smiled, and the scene ended with mutual camaraderie.

The moment occurred amid escalating tensions between law enforcement and protesters nationwide. Earlier this month, two black men, Alton Sterling and Philando Castile, were killed by police in Baton Rouge, Louisiana, and Falcon Heights, Minnesota—the latest in a series of controversial police shootings.

On Sunday, three police officers were shot and killed and three others were injured during a gun attack in Baton Rouge, Louisiana, an incident that occurred just 10 days after an ambush of Dallas police killed five officers and injured nine people.

“Sometimes these photos can look a bit cheesy,” I told one of the Cleveland protesters, Elhadj Bah, a 29-year-old political consultant from New York. “Why did you do that? What’s the point?”

“The key is to work together with everybody, law enforcement and all of that stuff. It’s not creating division or hatred,” Bah said. “Maybe we can all work together?”

“It changes their perception,” Bah added.

I couldn’t chase down the cops in the photo in time to get their reactions (or their names.) They were quickly lost to the milling crowds of Trumpians, protesters, musicians, and reporters. If you can identify them, let me know.