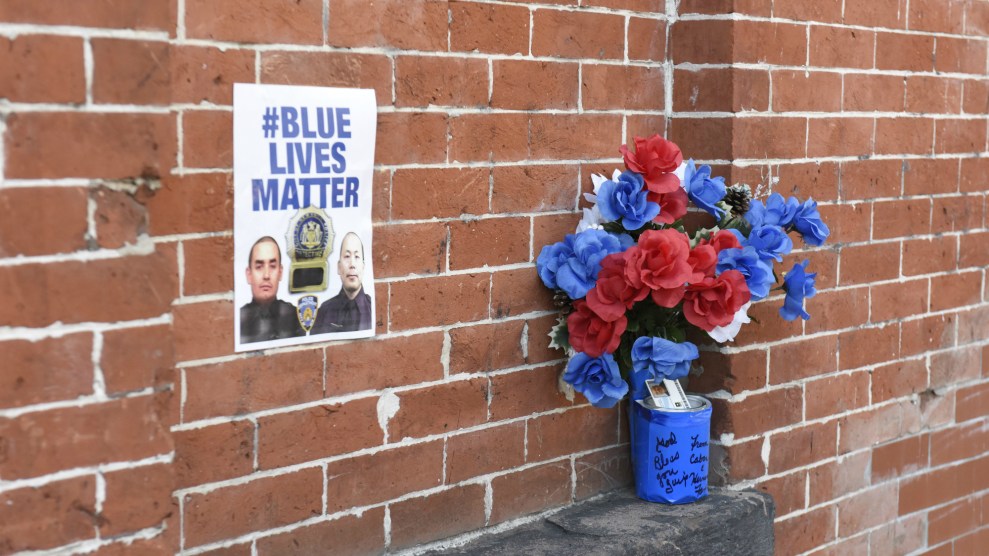 In the wake of Thursday’s shootings in Dallas, which claimed the lives of five police officers, law enforcement organizations across the country have used social media to show their solidarity with the Dallas Police Department and the families of those who were killed or injured.

But some police groups are also joining high-profile right-wing figures in issuing sharp criticisms of those they see as facilitating a “war on cops,” often taking direct aim at President Barack Obama, Attorney General Loretta Lynch, and supporters of the Black Lives Matter movement.

In a statement posted on its Facebook page Friday, the National Association of Police Organizations stated, “While we mourn and grieve and commit ourselves to supporting the survivors, we must also stand up and speak out against the senseless agitators and gutless politicians who helped bring about these murders.” The post also criticized the Justice Department’s Office of Civil Rights for its supposed refusal “to prosecute cop killers”:

In a Friday morning interview with Fox News, William Johnson, executive director of the National Association of Police Organizations, said Obama has not done as much as his predecessors when it comes to “condemning violence against the police and urging support for the police.”

In St. Louis, KMOX radio is reporting that Jeff Roorda, a top official in the St. Louis Police Officers’ Association, is standing by a controversial Facebook statement that he posted on his personal page hours after the shootings. The post includes a photo of a pair of hands covered in blood, with the caption “THIS BLOOD IS ON YOUR HANDS, MR. PRESIDENT.” (The post has been deleted from Roorda’s page.)

Officials with other police organizations have been less heated in their reactions to the shooting but have still implied that some of the blame lies with Black Lives Matter. Patrick Lynch, the leader of New York’s Patrolmen’s Benevolent Association, said the Dallas shooting was the result of “national anger against police caused by erroneous information.” In 2015, Lynch faced public backlash after he said that New York City Mayor Bill de Blasio’s support for Black Lives Matter-led protests contributed to the deaths of two NYPD officers.

On Thursday, while addressing the deaths of Alton Sterling and Philando Castile this week in encounters with law enforcement, Obama stressed that Black Lives Matter was not anti-police. “When people say black lives matter, it doesn’t mean blue lives don’t matter,” he said. Prominent Black Lives Matter activists have condemned the shootings and offered their condolences to the officers and their families.

In a speech discussing the Dallas shootings earlier Friday, Obama was firm in his condemnation of the attacks on police officers, saying there was “no possible justification for these kinds of attacks or any violence against law enforcement.”