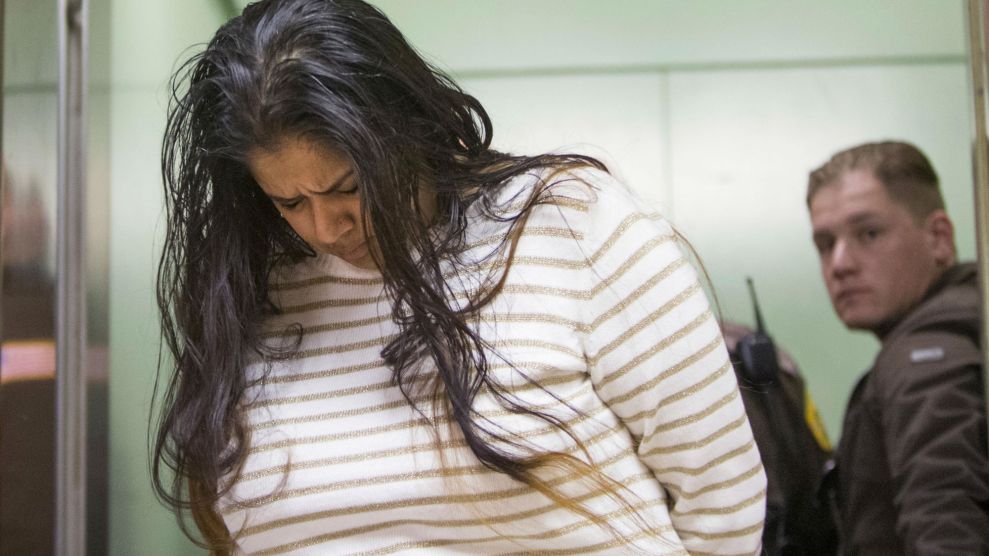 Purvi Patel is taken into custody after being sentenced to 20 years in prison for the death of her fetus. Robert Franklin/Associated Press

The Indiana Court of Appeals on Friday overturned the feticide conviction of a woman found guilty in the death of her child after she bought abortion-inducing drugs off the internet. Purvi Patel was sentenced to 20 years behind bars in 2015 after an Indiana trial court convicted her of two felonies: feticide and “neglect of a dependent.”

Patel, in her mid-30s, was managing her family’s restaurant in rural Indiana when she got pregnant. After doing research online, Patel ordered mifepristone and misoprostol (the same drugs typically prescribed for a medical abortion by a clinic) from a Hong Kong pharmacy for $72. In July 2013, Patel texted a friend, “Just lost the baby.”

But when she started experiencing severe bleeding, Patel went to the emergency room. There, her doctors called the police, who found the baby, which they estimated weighed a little over a pound, in a dumpster near Patel’s work. One of the ER physicians, who was also a member of a pro-life medical organization, left the hospital to join police in the search. About a week later, Patel was arrested and charged with feticide and neglect.

During her trial, attorneys for Indiana argued that Patel was at least 25 weeks into her pregnancy and that her fetus was not only viable but also took at least one breath before dying. They also argued that the state’s feticide law, passed in 2009 to protect pregnant women from acts of violence, could be used to criminalize pregnant women, not just third-parties. In 2015, after two years behind bars, Patel was convicted of both charges.

Patel’s attorneys, along with abortion rights advocates, vowed to overturn what they called a wrongful and contradictory conviction.

“Even assuming Indiana’s feticide law could somehow become an abortion criminalization law, many people were initially baffled by how Patel could be charged with two seemingly contradictory charges: feticide for ending a pregnancy and also child neglect for giving birth to a baby and then failing to care for it,” wrote Lynn Paltrow, the founder and executive director of the National Advocates for Pregnant Women, which provided legal support to Patel’s case.

In its ruling on Friday, the Appeals Court noted the contradiction, calling the outcome “absurd,” but found that the state’s feticide statute doesn’t require a dead fetus, despite the common definition of the word. Instead, the law just requires that a person terminates the pregnancy.

But the court did overturn the feticide conviction, ruling that the statute wasn’t meant to be applied to pregnant women themselves. The court also ruled that Patel’s class A felony charge should be bumped down to a class D felony. The case will go to a trial court for resentencing.

Jill E. Adams, a lawyer and the chief strategist for the University of California-Berkeley Law School’s new Self-Induced Abortion Legal Team, which also gave legal support to Patel, told Mother Jones that Patel does not plan to challenge the new felony charge.

“The SIA Legal Team is pleased the court recognized that feticide laws are intended to protect, not prosecute, pregnant women,” she wrote in an email. “Women don’t need to be stigmatized and sentenced; instead, they need safe, affordable access to provider-directed and self-directed health care.”