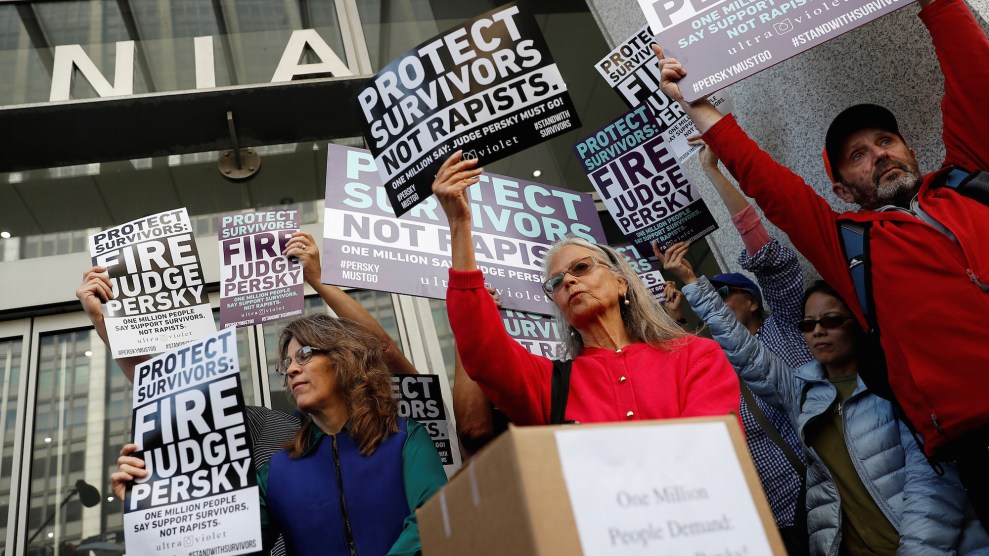 Update (8/26/2016): The Santa Clara County judge who sentenced Stanford rapist Brock Turner to six months in jail will no longer hear criminal cases, at his own request. Judge Aaron Persky, who is facing a recall campaign and calls by state legislators for a judicial misconduct investigation, has requested to be reassigned to civil court, where he previously presided. Michele Landis Dauber, a Stanford professor who is leading the recall effort, released a statement saying the campaign would continue. “Many issues affecting women are heard in civil court every day,” she said. “The issue of his judicial bias in favor of privileged defendants in sex crimes and domestic violence still must be addressed by the voters of Santa Clara County.”

A month has passed since outrage over a sexual assault at Stanford University swept the internet, spurring protests at the school’s graduation and outcry in the US House of Representatives. Brock Turner, the 20-year-old convicted of sexually assaulting a woman outside a fraternity, was sentenced on June 2 to just six months in county jail. According to Judge Aaron Persky, a longer sentence would have a “severe impact” on the young man; many believed Turner got off easy thanks to his privilege.

The case might have passed with little attention but for a powerful statement that the victim, known only as Emily Doe, read aloud to her attacker at the sentencing hearing. Millions soon read the letter online, and since then, lawmakers and activists have seized on the issue of sexual violence in California, funneling the internet outrage into tangible legislative efforts and campaigns. While some efforts have focused on the judge who decided the sentence—for example, erecting a billboard and collecting signatures to remove him from the bench—others have sought broader changes in California rape law, hoping to ensure the next offender receives a harsher punishment. “We all need to try to protect the next Emily Doe against the next Brock Turner,” Alaleh Kianerci, the prosecutor in the case, told a state Senate committee in late June.

Here are the efforts you need to know about:

Turner’s six-month county jail sentence was tied to his conviction on one charge, assault with intent to rape. He was also convicted on two other charges—penetration of an intoxicated person and penetration of an unconscious person, both of which carry a sentence of three to eight years in state prison—but a legal exemption allowed the judge to sentence him to probation on both. Rosen’s bill would eliminate that exemption, making the penalties for sexual penetration of an unconscious or intoxicated person the same as that for sexual assault through physical force.

“Violating an unconscious woman is never an indiscretion. It is a violent, predatory, and deeply destructive crime.”

“Instead of brandishing knives or threats, these predators use vodka or beer,” Rosen testified to the Senate Committee on Public Safety on June 28. “They use the cover of the outdated, offensive perception that campus sexual assaults are simply youthful, drunken indiscretions. Violating an unconscious woman is never an indiscretion. It is a violent, predatory, and deeply destructive crime.”

The bill, introduced in the California House by Assemblymen Evan Low and Bill Dodd (both Democrats), quickly drew criticism for introducing new mandatory minimums. Natasha Minsker, director of the ACLU’s California Center for Advocacy and Policy, cautioned against any laws taking away a judge’s discretion based on backlash to a single, high-profile case. “Everyone’s imagining Brock Turner and wanting him to get a longer sentence,” Minsker said. “We can’t change that sentence. Instead, the mentally ill defendant, or the defendant who has life circumstances that should be taken into consideration—that’s the person who’s going to get the longer sentence. And that person is almost certainly black or Latino.”

Recalling the judge: Within days of the sentence, Stanford law professor Michele Landis Dauber, a longtime advocate for sexual-assault victims, had begun organizing a recall campaign against Judge Aaron Persky. The campaign argues that Perksy was too lenient in his sentencing decision, in which he cited the “adverse collateral consequences on the defendant’s life”—including media attention and lifelong sex offender registration—as reasons for the light sentence.

“We believe he’s biased,” Dauber said, pointing to Persky’s related decisions—including a recent case in which Persky gave a Latino man a three-year sentence after he pleaded guilty to similar charges.

Critics of the recall, including a group of former Santa Clara County Superior Court judges, argue that Persky’s decision in the Turner case was based on a probation officer’s report, and that a recall would threaten judicial independence by making judges worry about public opinion in their decisions. Dauber, however, says accountability to the people is already built into the state judicial system. “Under the California constitution, all of our judges are elected,” she said. “A recall is part of that process.”

Right now, the recall campaign is laying groundwork for a campaign that will need to collect about 80,000 signatures from Santa Clara County voters and raising funds (almost $350,000 so far, according to Dauber). They’ll launch their on-the-ground effort next April, aiming to put the recall on the November 2017 ballot.

While the recall campaign does not accuse Perksy of illegal conduct, California lawmakers have asked the state’s judicial ethics body to investigate the judge. UltraViolet, a women’s rights activist group, is also campaigning for an ethics investigation into Persky’s decision.

Redefining rape: While Turner was publicly excoriated as a rapist, California law technically does not consider his crimes to be rape, since they don’t fall within its strict definition of “nonconsensual sexual intercourse.” That’s why state lawmakers led by Assemblywomen Cristina Garcia and Susan Eggman are seeking to update the archaic state code’s definition of rape to include more acts that are currently considered part of the broader category of sexual assault.

While their initial version of what’s known as Assembly Bill 701 was opposed by the ACLU due to its vague language on sentencing, later versions have made clear that the proposal will not change the sentences for the crimes it considers rape. An updated definition would hew more closely to the FBI’s definition of rape, which was expanded in 2012. Under the bill, Turner’s conviction on charges of sexually penetrating an unconscious and intoxicated person would qualify as rape. So would sexual assaults among members of the same sex, and forcible penetration by a “foreign object.”

A revised version of AB 701 was introduced on June 16 and could be reviewed by committee as soon as early August, according to an Eggman staffer. “When we fail to call rape ‘rape,'” the lawmakers said in a statement, “we rob survivors and their families of the justice they deserve.”