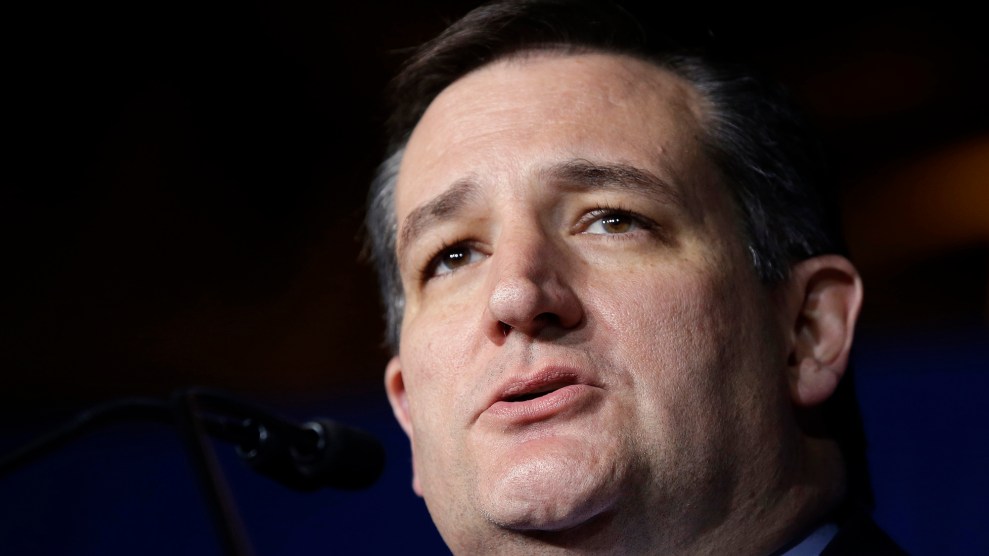 Just as Sen. Ted Cruz was about to launch into a tirade against Donald Trump at a rally in Cleveland on Wednesday afternoon, a sign came down from the heavens. Donald Trump’s plane descended from the sky, flying over the Cuyahoga River in a victory march at just the moment his vanquished foe was holding one last rally to thank his fans for their support.

The crowd, at a gathering hosted by the Texas delegation at a riverbank bar, booed loudly at the Trump-emblazed 757. “That was pretty well orchestrated,” Cruz shouted.

The senator from Texas is scheduled to speak during prime time at the convention Wednesday night, but he didn’t seem ready to throw his support behind the Republican nominee quite yet. “I don’t know what the future’s going to hold,” Cruz said. “I don’t know what’s going to happen. But what I do know, what remains, is my faith in the men and women here. What I do know is that everyone of us has an obligation to follow our conscience, to speak the truth, and truth is unchangeable.”

Cruz launched an extended metaphor comparing his presidential campaign to the opening scene from the film Patton, when the World War II general speaks before a massive flag to thank his troops. “He speaks about how in this war, every one of us, as he said, the object is not for you to die for your country,” Cruz said. “It’s to make the other fella die for his country.” He added, “Patton said, at the end of the day, everyone who was part of this, when we’re old and gray and our grandkids ask, ‘Where were you in the great one, in the great battle,’ we’ll be able to say to our grandkids, ‘I wasn’t shoveling crap in Louisiana.'”

The crowd loved it. When Cruz talked about being unsure of his own future, the assembled launched into a chant of “2020!” But before the event started, I overheard a pair of Cruz delegates worrying that Cruz might get booed by Trump delegates when he takes the convention stage.

One of the delegates comforted the other, saying, “It’ll just sound like Cruuuuuz.”