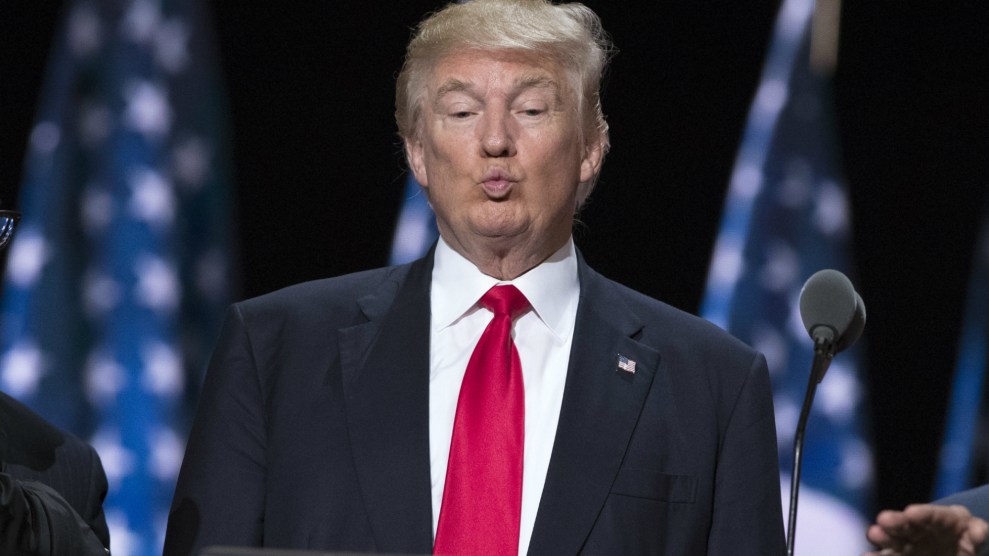 Donald Trump struggled mightily to raise money for his presidential campaign in June, the first full month after he became the presumptive Republican nominee. But his latest filings reveal the types of events that seem to help him boost his fundraising numbers: mass shootings and, paradoxically, news of just how bad his fundraising is.

On June 12, the day a gunman murdered 49 patrons of a gay nightclub in Orlando, Trump’s campaign raised just $23,000 from big donors, and probably a modest additional amount from people giving less than $200. That’s a strikingly small figure, and it marked the lowest point of a fairly low month for the Trump campaign.

Then came news of the massacre, followed by a rambling and bizarre speech in which Trump doubled down on his proposal to ban all Muslims from entering the country. On June 13, Trump’s donations from big donors jumped almost tenfold, to $213,000.

But even that improved figure is a very small haul for a modern presidential campaign, given that Mitt Romney was raising more than $1 million a day in June 2012 and Hillary Clinton has been raising almost $1.2 million a day. The Trump team’s filings last night to the Federal Election Commission show a badly stunted campaign that is struggling to raise money and maintains a bare-bones staff that lacks virtually any of the infrastructure a serious presidential effort usually has.

In the month of June, the filings show, Trump raised $26.7 million, but only $22 million of that came from people not named Trump. (Despite forgiving previous loans to the campaign, Trump lent the campaign an additional $1.8 million and donated another $2 million.) That translates to roughly $733,000 a day, on average, although much of it appears to have been concentrated at the end of the month.

While Trump ended the month with significantly more money than he started it with—$20.2 million compared with $1.2 million—it’s not much to celebrate. Clinton ended the month with $44.3 million in cash, although even that falls far short of the $97.5 million that Barack Obama was sitting on at the end of June 2012.

One problem for Trump’s fundraising is that, despite his big boasts, he’s not getting as much help from his own party as Clinton is from hers. Both candidates operate what are known as “victory” committees, joint operations with the respective national parties that allow big-time donors to write one giant check to support their side. The money is then doled out based on a formula and donors’ instructions. Ordinarily, donors are simply encouraged to write as big a check as possible, but last month Politico reported that some Republican National Committee fundraisers were telling donors to steer their money more toward the party. It’s difficult to tell for sure if that’s happening, but of the $12 million the Trump/RNC operation doled out, just $2 million wound up with the campaign. The rest went to various party committees and expenses. By contrast, of the $34.5 million the Clinton/DNC joint operation passed along, $11 million went to the Clinton campaign.

Trump’s poor fundraising can be partly explained by the other major number on his FEC filing: the campaign’s spending. In June, the first full month after the defeat of his primary opponents and, in theory, the period in which the campaign was supposed to be ramping up to take on Clinton, Trump spent just $7.8 million. Clinton, on the other hand, spent $34 million, and Romney spent about $27 million in June 2012. It takes money to raise money, and Trump’s fundraising totals on a day-by-day basis show a handful of high points with many more low points, reflecting a scattershot effort at fundraising, conducted by a minimal staff without serious fundraising expertise. After the campaign saw a spike in fundraising the day after the Orlando attack, the numbers slid steadily downward until June 20.

That day, the campaign was hammered for its latest FEC filing, which showed abysmal fundraising in May. Trump and his children vowed they would raise enough money in the final days of June to “shock Hillary Clinton,” and on June 21, the campaign sent its first fundraising email. Even though at least 60 percent of the emails were caught in spam filters, an unusually high rate even for political fundraising emails, the campaign claimed that it raised $3.3 million the first day and $3.4 million the next. There’s no way to confirm those numbers because small donations are not detailed. But at least when it comes to larger donations, those two days were the biggest the campaign has had, raising $1.8 million on June 21 and $1.3 million on June 22. (Trump himself added $2 million on the second day of the campaign.)

Unfortunately, the fundraising dropped perilously after that first big blast. By June 26, the daily take from big donors had fallen to $150,000.