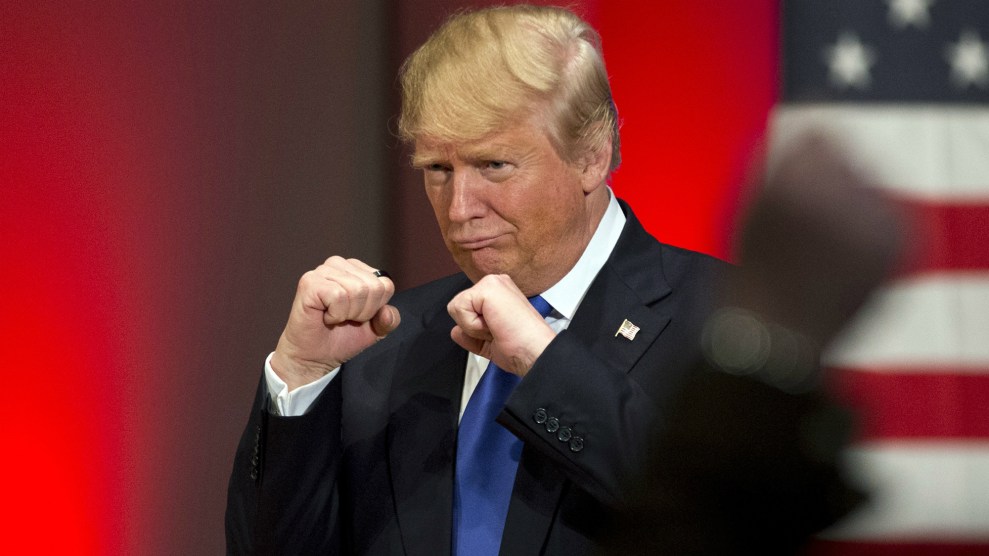 Donald Trump’s presidential campaign has accused a former aide of violating a nondisclosure agreement by spilling to reporters stories of internal strife within the campaign, and the Trump campaign is demanding $10 million from the former aide, Sam Nunberg. Nondisclosure agreements are becoming increasingly common in the political world, but this is the first time one has led to a high-profile legal battle, and news of this legal action—which is pushing campaign dirty laundry into public view—comes just days before Trump is to be crowned the GOP’s presidential nominee at its convention in Cleveland. Meanwhile, Nunberg, who was fired last August for supposedly publishing a racist Facebook post years earlier, filed a lawsuit Tuesday against the Trump campaign that seeks to shut down the arbitration case Trump initiated and that asks for $10 million from the campaign for breach of contract.

The dispute has apparently been going on behind the scenes since May but was made public when Nunberg filed his lawsuit in New York. The Associated Press reports that Nunberg says he was targeted by the campaign because Trump’s inner circle believes he was the source for a New York Post article that reported that former campaign manager Corey Lewandowski and campaign spokeswoman Hope Hicks had a noisy and emotional fight on the street outside of Trump’s New York City headquarters. Nunberg denies that he was the source, but in the court filings his attorneys threw fuel on the fire by referring “to the quarrel as being part of an ‘apparent affair.'”

The AP reports that Nunberg’s filing claims the campaign is stifling his First Amendment right to free speech to talk about the campaign, and he asserts that his contract was with a Trump exploratory committee that is not officially or legally connected to Trump’s current presidential campaign.

The fact that Trump has forced his advisers to sign nondisclosure agreements became an issue recently when CNN hired Lewandowski as a paid commentator. Critics of that move questioned whether Lewandowski was bound by the agreement to say nothing negative about his former employer.