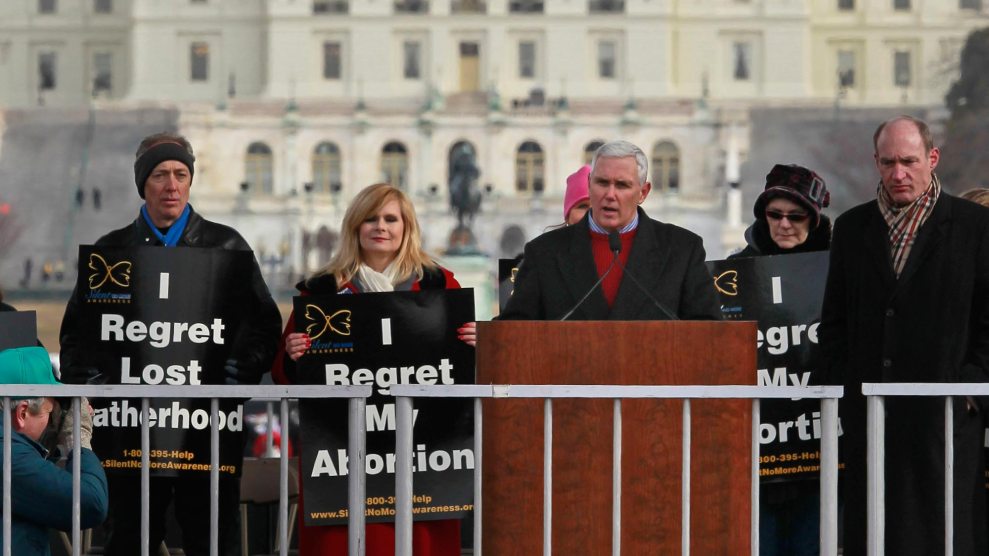 Mike Pence speaks at a 2011 anti-abortion rally on the National Mall in Washington, DC. Alex Brandon/AP

The sweeping abortion bill that Indiana Gov. Mike Pence signed into law in March gained national attention for prohibiting women from electing to have an abortion due to the race, gender, or disability of the fetus. But the bill contained another unusual provision: It required that aborted fetuses receive what amounts to a funeral.

Pence, whom Donald Trump announced as his vice presidential running mate on Friday, signed the law that made Indiana the second state ever, after North Dakota, to pass a ban on abortions carried out for certain reasons. The law also imposed liability for wrongful death on doctors that perform an abortion motivated by one of the prohibited reasons. And, as Mother Jones reported in March, the law also required that health care facilities inter or cremate the remains of an aborted fetus, and prohibited fetal tissue donation.

Following the Supreme Court’s decision to strike down several Texas abortion restrictions in June, a federal judge blocked the Indiana law from going into effect.

“By enacting this legislation, we take an important step in protecting the unborn, while still providing an exception for the life of the mother,” Pence said in a statement when he signed the bill. “I sign this legislation with a prayer that God would continue to bless these precious children, mothers, and families.”

This sort of fetus funeral provision has recently gained traction in legislatures around the country: Arkansas and Georgia have similar laws on the books, while Ohio, South Carolina, and Mississippi have all considered similar measures in the last year.