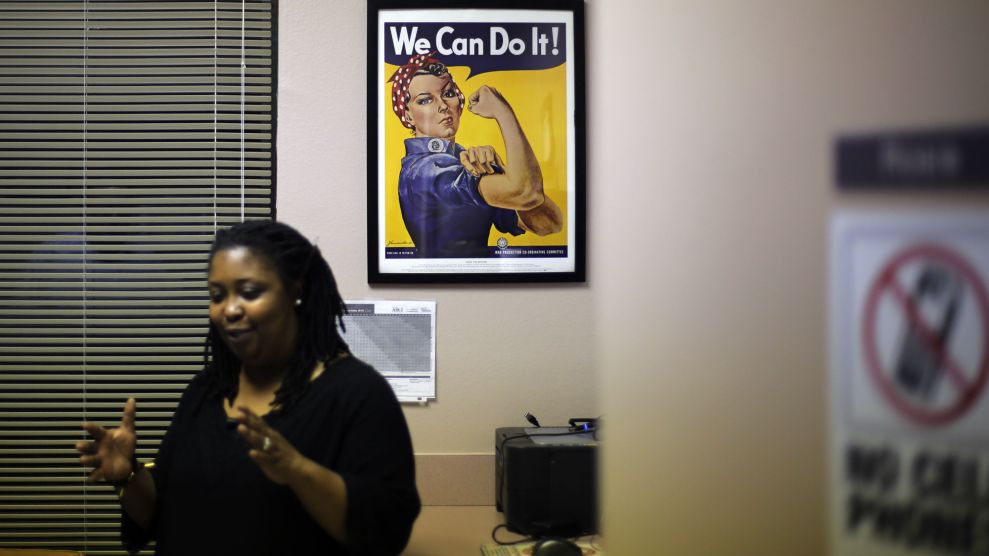 A counseling room is seen during a tour at Whole Woman’s Health of San Antonio, Texas, on February 9, 2016.AP Photo/Eric Gay

On the morning of June 27, in a case that was widely considered a landmark decision in reproductive rights, the Supreme Court ruled 5-3 in favor of Texas abortion providers. They concluded that key provisions of HB 2, an omnibus bill that required physicians to have admitting privileges at local hospitals and clinics to be outfitted like hospitals, placed an undue burden on women seeking abortions. The stakes were high: For abortion providers in Texas, a decision to uphold the law would have likely left the state with fewer than 10 clinics.

On the day the Supreme Court issued its ruling, patients and staff at Houston Women’s Clinic—a clinic that has provided abortion care for 40 years— cheered in celebration and relief. Their clinic would stay open—for now.

“Our initial reaction was that we were ecstatic—we were thrilled that logic finally prevailed. To be vindicated and have the Supreme Court recognize HB 2 as a sham law was a very exciting moment,” said Kathy Kleinfeld, the director at Houston Women’s Clinic. “At the same time, we recognize that the damage has already been done in the state of Texas.”

“To be vindicated and have the Supreme Court recognize HB 2 as a sham law was a very exciting moment. At the same time, we recognize that the damage has already been done in the state of Texas.”

The Supreme Court ruling may have eased the burden of outfitting a clinic to ambulatory surgical center standards and finding a physician with admitting privileges at a hospital within 30 miles of the clinic, but it’s not exactly smooth sailing from here. Despite the historic victory, major barriers remain for clinic owners in Texas. Those that plan to reopen after being shuttered by the regulations have a long, expensive road ahead: The space they once occupied has likely been lost and costly alternatives must conform to code. They must also hire a team of qualified physicians and nurses, purchase the necessary equipment, work through what appears to be increasingly complicated red tape from state regulators, and function in a state with a history of hostility toward abortion providers.

The closure of clinics in Texas was already a problem years before HB 2 passed. Amy Hagstrom Miller, who owns Whole Woman’s Health, the lead plaintiff in the Supreme Court case, told Mother Jones she remembers a time prior to 2008 when the passage of abortion restrictions became a regular feature in the state Legislature. Then there were between 60 and 70 clinics throughout the state. By 2013 there were 40, and the law shuttered more than half of them. When the Supreme Court got involved, only 19 clinics remained open, and there was a massive swath from San Antonio to El Paso without a single clinic. Many Texas women who needed abortions went to neighboring New Mexico.

Two Whole Women’s Health clinics were forced to close after Gov. Rick Perry signed HB 2 into law three years ago, and the admitting privileges requirement reduced the number of physicians on their staff. Hagstrom Miller had filed away spreadsheets detailing a contingency plan in case the ruling didn’t go her way. “It’s different to have to throw those spreadsheets away—I kind of wanted to have a ritual burning.”

In April 2014, Reproductive Services of El Paso—one of the other plaintiffs in the Supreme Court case—shuttered after its physician lost her admitting privileges at a local hospital, meaning the clinic was no longer in compliance with HB 2. Last September, the clinic, which has historically served 2,000 patients every year, reopened at a new location after a federal judge blocked the admitting-privileges provision from being enforced pending the Supreme Court decision.

But before opening its doors, Reproductive Services still had to take the Texas Department of Health and Human Services to court over a licensing disagreement involving whether the clinic had to adhere to the surgical center standards that had recently been put on hold in federal court. The judge threatened to hold the state health department in contempt for insisting the clinic adhere to the standards that weren’t supposed to be enforced and for not issuing the license. Aside from the cost of litigation, Hagstrom Miller said the clinic has had an inspection every three months since it opened.

Opening a new clinic in Texas takes a lot of money, resources, and patience. A license can cost a provider more than $5,000, a nonrefundable fee. Heather Busby, executive director at NARAL Pro-Choice Texas, explains there are a series of inspections that each clinic must undergo before opening, but staff members have to be hired and equipment has to be installed to meet the requirements to obtain licensure. “It’s not like you get licensed and then you staff up and buy equipment,” she says, “you have to do all those things first.”

Another threat for providers has been the Texas Department of Health and Human Services, which has evolved, Hagstrom Miller said, to become a “more political, gotcha endeavor.” Four days after the Supreme Court ruling, officials at the state Department of Health and Human Services published a proposal in the Texas Register that would require providers to cremate or bury fetal remains, regardless of gestational stage. The final rules are expected to take effect in September, and Gov. Abbott has expressed approval at the update.

Bryan Black, a spokesman for the health commission, told Mother Jones that the rules aren’t a major change, and that they only seek to eliminate a very specific form of tissue disposal. He said the incineration method most commonly used is appropriate under the code. Black also said it was Abbott’s office that requested that the agency look into creating an amendment back in January. Arkansas, Indiana, and Georgia have similar laws on the books. Ohio, South Carolina, and Mississippi have all considered requirements to this effect as well.

Even though they are not required to do so, the state Health Department also controls the statistics on the effects of the law and releases them annually. Nearly two weeks before the Supreme Court issued its ruling, the ACLU of Texas sent a letter to the department’s commissioner, John Hellerstedt, that demanded the department “stop concealing” 2014 statistics on abortion in Texas. Part of the reason the ACLU wanted the numbers to be made public was that in oral arguments, Justice Anthony Kennedy wondered if the case should be sent back to the lower court so that more evidence on the law’s impact could be collected. A source inside the health agency told the Texas Tribune that the data had been collected and analyzed for months.

Three days after the ruling, the numbers were released, and they showed a significant drop in the number of abortions in the state. However, according to a report by the Houston Chronicle, the state quietly adjusted the way it recorded abortion statistics for the report, concealing a 27 percent jump in second trimester abortions the year after HB 2 restrictions went into effect. It based its calculations of what constituted a “trimester” on the estimated date of fertilization rather than a woman’s last period, which means that 3,008 abortions were categorized as first-trimester abortions when they would have been counted as second-trimester abortions under the HB 2-era rules. Medical professionals dispute this method as highly unscientific.

At this point, providers say they expect further regulations and restrictions on clinics to emerge from the Legislature and the health commission.

“We’re not surprised that the state, in some way, tried to slide some additional regulations through days after the ruling,” Kleinfeld said. “The honeymoon is over. Thank you, Greg Abbott.”