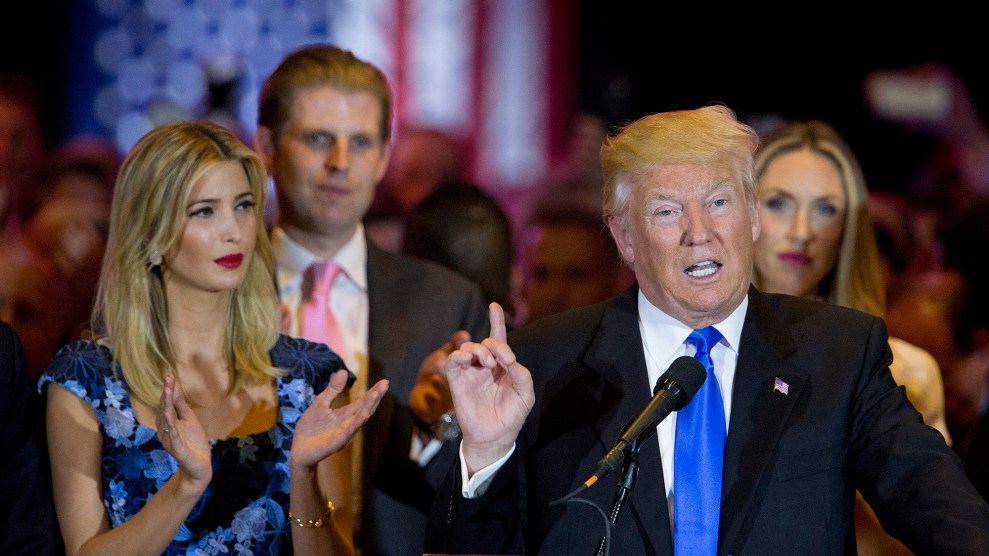 Polling shows Donald Trump trailing far behind Hillary Clinton among female voters—and recent comments by the GOP nominee and his son Eric aren’t likely to help him win over women.

In the wake of Roger Ailes’ ignominious fall from the helm of Fox News over allegations that he sexually harassed multiple women at the network, Trump has faced questions about the scandal and his own views on workplace harassment. Trump’s response has been that the allegations against Ailes (a friend of the GOP nominee) seem overblown.

In an interview with USA Today published on Monday, Trump was asked how he would feel if his daughter Ivanka were subjected to the kind of harassment that women at Fox allegedly experienced. His response, Powers wrote, was “startling, even by Trumpian standards.” He didn’t call for the harasser to be punished; rather, he said, “I would like to think she would find another career or find another company if that was the case.”

On Tuesday, Trump’s son Eric appeared on CBS This Morning to defend his father’s recent comments but ended up just digging the two in deeper. “I think what he’s saying is, Ivanka is a strong, powerful woman” who wouldn’t “allow herself to be subjected to that,” he said.

Eric Trump on @CBSThisMorning today: Ivanka wouldn’t “allow herself to be subjected” to sexual harassment. pic.twitter.com/1jJKF2Iaus

He seemed to be suggesting that strong women don’t face sexual harassment in the first place and that women who do experience it are somehow weak. None other than Fox News anchor Megyn Kelly—an alleged victim of Ailes’ unwanted advances—summed up her dismay with Eric Trump’s comments in a one word tweet.

Neither Trump nor his son seemed to consider the fact that Ivanka may have, in fact, had to navigate the issue of harassment at work. But according to her own book, early in her career Ivanka did worry about catcalling from construction workers and the male-dominated world of real estate. She even tried to change her appearance to ward off harassment.

re @EricTrump, Ivanka writes in her book she dressed “ultra conservatively” early in her career to avoid harrassment pic.twitter.com/Uhy0xwqqA7