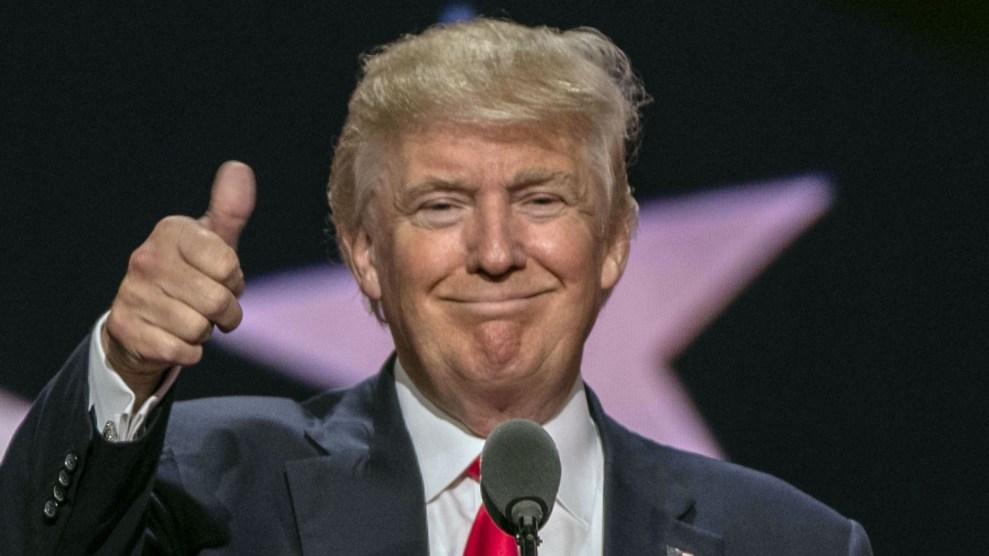 With the Trump campaign in turmoil after a week filled with gaffes, bizarre feuds, and rumors of despondent staff (and it’s only Wednesday!), anti-Trump Republicans have once again begun floating the idea that Donald Trump could be replaced as the GOP nominee.

Party insiders might have been able to flex their political muscle to keep Trump from the nomination in the first place, but once the Republican National Convention last month formally nominated Trump, the mechanisms by which they can dump him evaporated—no matter how much anyone wants it to be otherwise. Speculation about the possibility that Trump could be removed began to build this morning after ABC’s John Karl reported that senior GOP officials were discussing how to replace Trump on the ballot should he withdraw from the race.

But that’s just it: Trump would have to drop out. He couldn’t be replaced against his will.

A Republican lawyer who has advised the Republican National Committee in previous election cycles told Mother Jones that there are zero options for the party to remove Trump.

“It seems that some outlets/blogs had some misleading headlines, insinuating that Trump could be ‘replaced,’ but that would be an incorrect assessment of the ABC interview,” the lawyer, who requested that his name not be printed, told Mother Jones in an email. “There’s no process under the Rules of the Republican Party for removing a nominee.”

Another GOP insider, attorney Henry Barbour (the nephew of former RNC chair Haley Barbour), was more succinct when asked to be interviewed about the possibility of the GOP replacing the man it crowned as nominee just two weeks ago.

“This is an absurd question,” he wrote in an email. “Sorry.”

1) We are at a crisis point. The wheels are off. Blowout election loss now likely. Trump’s numbers are worsening across the board.

2/ Options are now limited since convention has ended. He cannot be thrown off ballot. He has to withdraw. He must be sold on this.

The former RNC lawyer said there is a mechanism by which Trump can be replaced, if he voluntarily drops out. Rule 9 of the party’s internal rules stipulates that if a presidential or vice presidential nominee leaves the ticket, the 168 members of the RNC—not voters or delegates—would select a new nominee.

“This is all very hypothetical, but the key point is that the nominee can’t be ‘replaced,'” the lawyer says. “Rule 9 is only intended for filling a vacancy.”

But time is running out for the party to replace Trump even if he steps aside voluntarily. State deadlines for certifying names on the ballot are fast approaching, meaning that Trump’s name would likely remain on some states’ ballots even if he withdrew from the race. Texas, a must-win state for Republicans if they hope to take the White House, has an August 26 deadline for withdrawing. As the Daily Beast noted Wednesday, next week is the deadline for removing Trump from the ballot in reliably red Arkansas and Oklahoma, and swing state North Carolina needs the candidate’s name to be certified by this Friday, August 5.

@Reince @GOP @PRyan
Look at this. Please disavow Trump already. He has given you EVERY reason to #ReplaceTrump https://t.co/i63sh7WB61