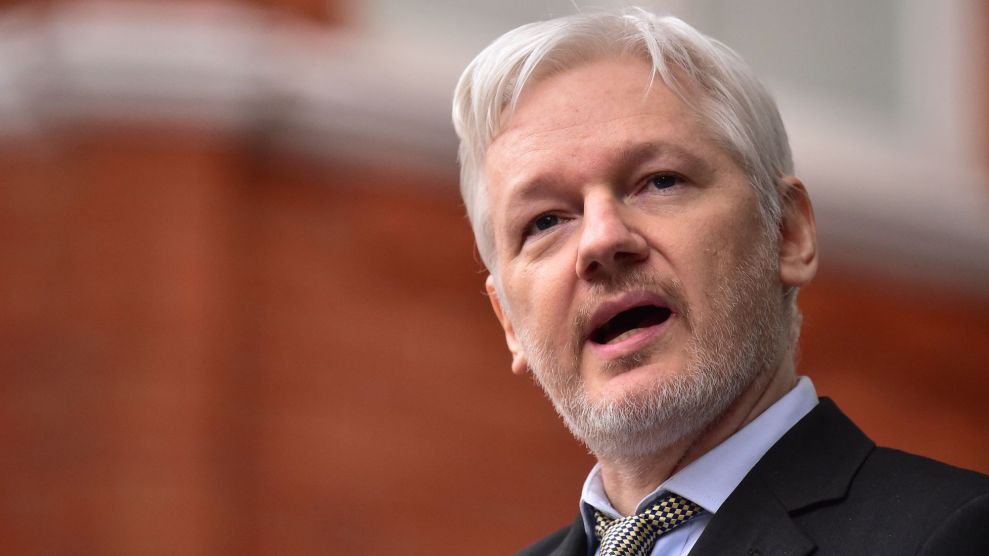 WikiLeaks founder Julian Assange has intimated that Seth Rich was murdered because he leaked information from the Democratic National Committee.Dominic Lipinski/AP

The July 12 shooting of Seth Rich, a 27-year-old staffer at the Democratic National Committee, was likely a robbery gone wrong, according to Washington, DC, police. But to the dismay of Rich’s family, his death has become fodder for dark anti-Hillary Clinton conspiracy theories that have been circulated widely on social media and amplified by longtime Donald Trump adviser Roger Stone.

The main theory speculates that Rich was murdered because he was a source for WikiLeaks, which published nearly 20,000 of the DNC’s hacked emails and other files last month. That theory has brewed on the internet, including in a popular pro-Trump subreddit, and WikiLeaks founder Julian Assange lent it credence on Tuesday when he hinted during an interview on Dutch television that Rich might have been a WikiLeaks source. Yet he refused to confirm whether Rich had any links to WikiLeaks, saying only, “I am suggesting that our sources take risks and they become concerned to see things occurring like that.” The site offered a $20,000 reward on Tuesday for any information that would help solve Rich’s murder.

Assange said during the interview that the shooting was a “concerning situation” and stressed that the motive was still unknown, but police say there is no evidence that Rich’s death was politically motivated. “At this time, there is no indication that Seth Rich’s death is connected to his employment at the DNC,” the DC Metropolitan Police Department said in a statement on Wednesday to Mother Jones.

The statement also said the police “are pleased when any outside contributors help us generate new leads.” But Rich’s family has criticized Assange for his comments. Brad Bauman, a spokesman for the family, told Business Insider on Wednesday that the family wanted talk of conspiracy theories to stop. “For the sake of finding Seth’s killer, and for the sake of giving the family the space they need at this terrible time, they are asking for the public to refrain from pushing unproven and harmful theories about Seth’s murder,” Bauman said.

Assange is not the only person to float wild theories about Rich’s killing. Stone, a longtime Republican strategist and close ally of Trump, has used the death to promote the right-wing “Clinton body count” theory that claims the Clintons have been responsible for numerous political murders dating back to the 1980s.

Stone, who has admitted to communicating with Assange, spent much of Tuesday and Wednesday tweeting links to Assange’s “confirmation” that Rich was a WikiLeaks source, as well as other messages in support of the body count theory. Others on the right have been pushing the conspiracy talk in recent weeks, claiming that recent deaths—including those of Rich, a Tim Kaine aide named Joe Montano, and even anti-Clinton and Holocaust-denial author Victor Thorn—were orchestrated by Clinton.

Rachel Alexander, a columnist at the right-wing website Townhall, wrote a piece on Tuesday laying out the theory. “What is comes down to is this: how many other politicians have you heard of who have had so many mysterious deaths associated with them?” Alexander wrote. “You don’t hear of a Bush body count—not even an Obama body count.” Jared Wyand, who runs a popular pro-Trump Twitter account called Watch Clinton Cash, tweeted a video roundup of alleged Clinton murder plots. Even Curt Schilling, the former Red Sox pitcher turned right-wing internet celebrity, got in on the act.

At some point beyond like 25 deaths don’t they become the Bill Cosby’s of murder? One a fake, 2 a rumor, like 50?https://t.co/LXQ3jXE9Ut